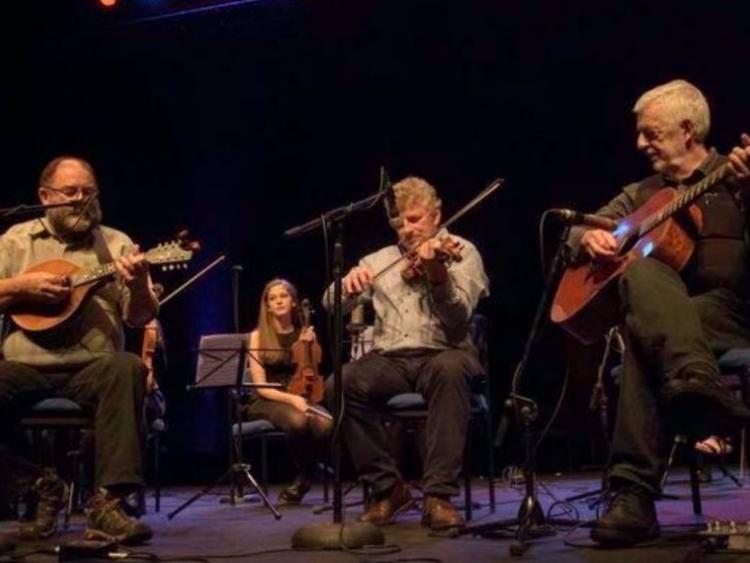 Noel Lenaghan, Martin McGinley and Ted Ponsonby will open the Letterkenny leg of the concert

A unique concert involving Letterkenny and it's German twin Rudoldstadt will take place this weekend.

The Regional Cultural Centre and Letterkenny Irish Pub in Rudoldstadt will present The Twin Sessions on Saturday, June 27, 7 to 9pm, Irish time, 8pm to 10pm in Germany.
The two-hour long concert will stream live from Letterkenny Irish Pub and Fitz Howard’s Guitar Workshop in Letterkenny and features a top-class line-up from folk to alt rock.
The online concert will be opened by Rudolstadt Mayor Jörg Reichl, who has visited Letterkenny on a number of occasions, followed by music from Tom Ziegenspeck and Leonie Lindenberg, Steve Voltz and Dan Riley and Doc Taylor and The Red Haired Girl.
After 9pm the stream switches to Ireland, and the Cathedral town, where Donegal County Councillor Jimmy Kavanagh will welcome viewers.
The Letterkenny stream will feature traditional music from Martin McGinley, Ted Ponsonby and Noel Lenaghan, before the concert is brought to a close with an acoustic set by two members of Donegal alt rock group, In Their Thousands.
The Donegal four-piece has already built a very loyal following in Rudolstadt following their first appearance at Rudolstadt Festival, Germany’s largest folk and roots festival, in 2019.
Brothers Declan and Aidan McClafferty, Ruairí Friel and Martin Smyth were due to make a welcome return to Rudolstadt this summer, but instead will perform there in the near future. Representing the band in The Twin Sessions will be cousins Declan and Ruairí.
Doc Taylor and The Red Haired Girl will be performing from Rudolstadt for The Twin Sessions.
The Twin Sessions also coincide with Letterkenny Irish Pub’s first anniversary of opening its doors to the public. Run by Letterkenny native, Karol Kerrane and his wife, artist, Selena Mowat, the pub has already welcomed a large number of Donegal musicians during that time.
Cllr Jimmy Kavanagh, who played an integral part in the twinning of the two towns during his time as Cathaoirleach of Letterkenny Municipal District, said it has been a great success.
“The twinning of Letterkenny and Rudolstadt is now a hugely successful partnership, with working connections established across many areas, including education, culture and the arts,” he said.
“There are frequent visits, both formal and informal, between officials and citizens of the two towns and I look forward to the relationship developing even further and to renewing travel between our two towns post Covid-19,” he said.
Links to The Twin Sessions Live Stream will be posted on the RCC and Letterkenny Irish Pub’s Facebook pages prior to the event on Saturday, June 27.