A delegation will visit Ireland to explore uncanny cultural similarities 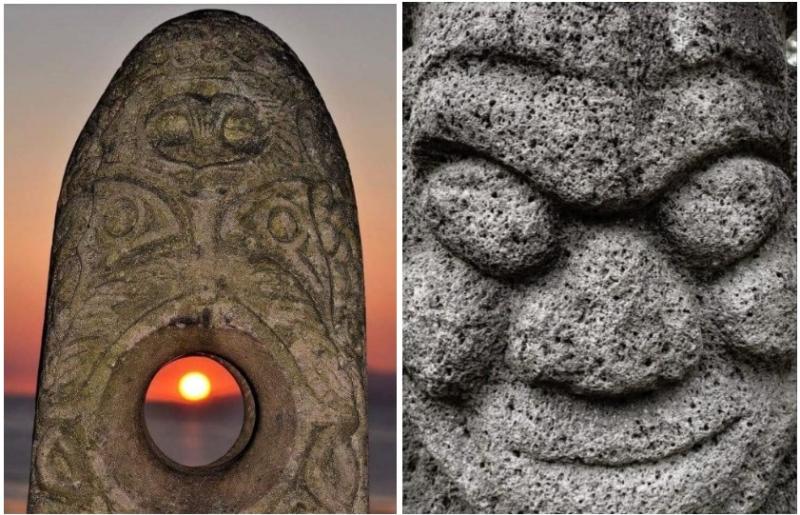 Both cultures share a similar stone carving tradition. Left is a sculpture by Brendan McGloin and pictured right is a Dolharubang Jeju Island sculpture

A delegation of Korean stonemasons and artists will visit Donegal for a very special event at Donegal Castle.

The groups will arrive in Ireland this Thursday as part of the Irish-Korean Stone Culture Art Exchange, the first project of its kind in Ireland.

The visitors will spend two weeks in a nationwide tour participating in a program of events and visiting Irish culture and heritage sites in Kerry, Cork, Galway, Donegal, Derry, Dublin and Wexford. The event at Donegal Castle will take place on September 24.

The Korean party who hail from Jeju-do, a small volcanic island off the Korean peninsula, are a talented group of dry stone wallers, sculptors, performers, writers and a folk singer, and are accompanied by a Korean film crew.

The project started with a friendship between Donegal dry stone waller Louise Price and Jeju Island waller Hwan Jin Jo.  Over Zoom meetings it grew into a multi-agency effort involving heritage and art professionals in both Korea and Ireland.

There were incredible similarities noted between the two cultures in terms of their craft, art and outlook on life.

In a project report prepared by Louise, she said: “The people of Jeju-do and Ireland are both agrarian islanders who share many cultural similarities. Against an historic background of colonial occupation and partition, both peoples have retained informality, sense of humour and hospitality which are at odds with colonial powers.

“This project was initiated by Dry Stone Wallers from Korea and Ireland through a shared love of traditional stone techniques, which led to friendships whereby historic and cultural connections were discovered and continue to be explored and celebrated.

“Jeju-do like Ireland has cultural ancient proverbs regarding their island such as, ‘Wind, stone and woman, but no beggars, thieves or locked gates.’

“The effect of the wind is evident in all areas of life including how the Jeju-do people’s use of stone. The examples are the Jeju-do thatch cottage, which are built behind walls of dry stone. Jeju-do teaches us the wisdom of life through parables of the wind.”

The island already had a connection with Donegal, making this new collaboration all the more significant.

The report continues: “A Columban missionary Father Patrick Mc Glinchey (1928-2018) discovered similarities between Jeju-do and his native Donegal upon his arrival on the island in 1953.

“At that time the Korean peninsula was just recovering from a horrific three-year war and both the economy and society were devastated by the destruction of that conflict. Jeju-do’s people were among the poorest in South Korea, trying to eke out an existence by working the fields with wooden ploughs and oxen.

“Fr McGlinchey set about trying to improve the lives of islanders by importing contemporary farming practices from Ireland which earned him the name of the ‘blue-eyed pig priest’ after importing a few piglets to give to local children to raise and breed.

“Fr McGlinchey stated that Jeju-do’s most valuable resources are the people, their music, tradition, and culture. That is what makes Jeju-do different from others.”

The stonemasons of Jeju island will present large hand carved stone items which were shipped from Korea especially as gifts to the people of Ireland. A pair of Jeju traditional stone gateposts and a tall sculpture called a ‘dolharabang’ or ‘grandfather stone’ will be located in counties Galway and Donegal.

The Korean delegation will be welcomed to Donegal Castle for an event comprising music, performance art and storytelling on September 24 from 6pm to 7.30pm.

Details of this fantastic, unique cultural collaboration, and on stone masonry in Donegal can be found at www.tirchonaillstonefestival.ie

The project is supported by Donegal Culture and Creativity Grants Scheme for Creative Ireland.