Grease The Musical is coming to Donegal Town

All set for some Summer lovin' 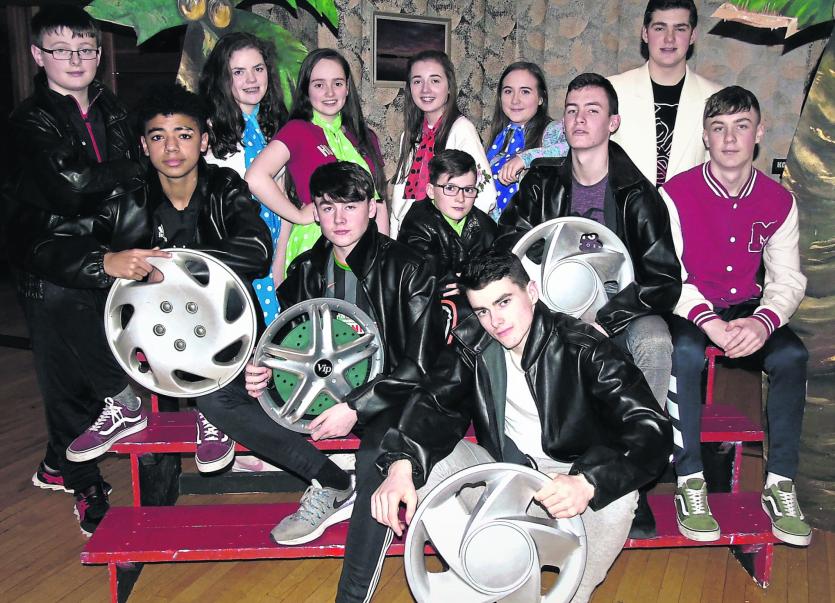 The cast of Grease The Musical

Donegal Town Community Band is hugely excited about their new adventure into the musical world with their very own production of “Grease” The Musical at The Central Hotel Donegal Town from Wednesday 7th February to Saturday 10th Feb. at 8pm nightly.
With so many talented young members of Donegal Town Community Band having participated in various local and school productions the idea of The Band presenting a musical was hatched.
The director for this ambitious project is Donegal Town lady Tracey Faulkner who has a string of musical and dramatic accomplishments to her bow. Tracey relishes her role as director says,
“Grease is the most produced musical on Earth and one that many of you have seen before, either on stage or on tv.
“We had a fabulous time rehearsing for this moment and we hope that we bring something new to the show that you can enjoy”.
With well known hits such as “You’re the one that I want”, “Hopelessly devoted to you”, “Summer Nights”, “Grease Lighting”, “Sandy” among many others its sure to be a fantastic night.

The young cast range in ages from 10 to 18, some experienced performers on the stage some completely new to the limelight.
Daniel Gallagher is playing Danny Zuko, Ellen McGroary is playing Sandy. Killian Faulkner is playing Kenickie and Aoife Breslin is Rizzo. TBirds are being played by Gerard McIntyre, Aidan McHugh and Brian Fegan. Pink Ladies are Siofra Mauerhofer, Anna Campbell and Aoife Joyce.
Ellen Duffy is Patty Simcox, Frank Duffy is ‘Vincent Fontaine’, ‘Cha Cha’ is played by Alanna Murry with other leads Patrick Harley and Deane Connaghan.
This musical journey is very much a team project with Band Leaders taking on roles and tasks with energy and fresh enthusiasm with Martina O’Donnell and Darragh Tierney choreographing routines and dipping into cameo roles ‘Ms. Lynch’ and ‘Johnny Casino’.
The Band is delighted to be presenting their show at The Central Hotel Donegal Town, a venue which has great memories for many who attended or took part in The Donegal Entertainers away back in the ‘70’s and 80’s but up until now has not hosted a musical.
Tickets are now available for you to purchase from Donegal Town Community Band Members (contact number for booking 0876044224) priced at €10 per adult or €7 child. So get your tickets now, strap yourself in, ‘Grease’ those wheels and get ready for a trip back in time to the Rockin’ 1950’s.