The Successful TD and Three Days of Rain sure to delight

Conor Malone looks ahead to this weekend's busy programme of entertainment 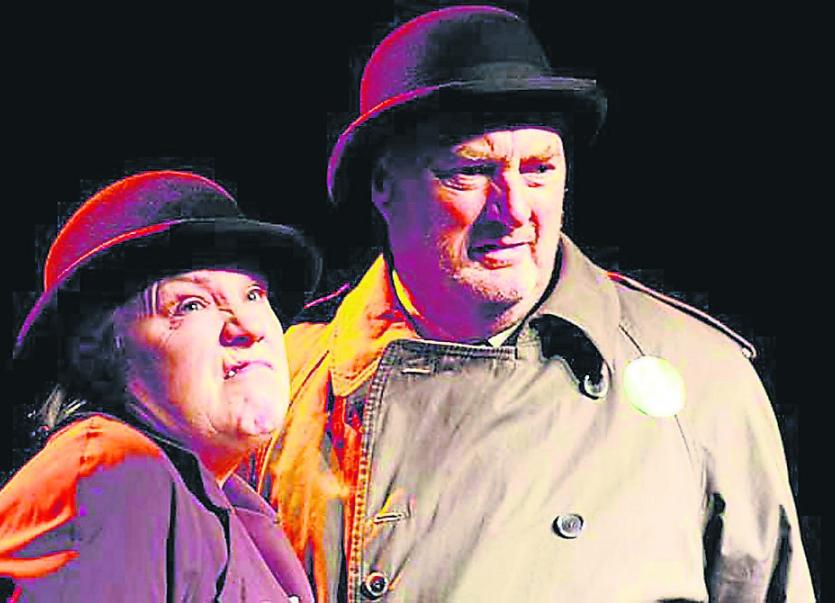 Mary McEvoy and Jon Kenny in a scene from The Successful TD which plays at An Grianan Theatre, Letterkenny.

This Weeks Highlights
There’s comedy in The Alley, Strabane tonight (Thursday, February 15th) with Dumped Divorcee Rides Again or you can enjoy Mozart by Candlelight in The Millennium Forum, Derry.
John Kenny and Mary McEvoy star in John B Keane’s The Successful TD at An Grianan Theatre, Letterkenny on Friday and Saturday night.
There’s more theatre on Friday with Eddie Kerr’s showband comedy One Night Stands in at The Waterside in Derry and The Man Who Fell To Pieces in The Alley, Strabane.
Music-wise Arcanadh are the headline act at Club Beo in Leo’s Tavern, Crolly while country star Mike Denver is at The Millennium Forum, Derry.
Saturday sees The Lost Brothers play The Balor, Ballybofey while Queen tribute act Flash Harry are in The Alley, Strabane and Garth Brooks tribute act Friends In Low Places is at the Millennium Forum, Derry.
One for schools – Cyclone Reps The Shakespeare Sessions is on in An Grianan Theatre, Letterkenny next Monday and Tuesday morning.
Finally, The Butt Drama Circle’s festival play Three Days Of Rain by Richard Greenberg has a three night run (Tuesday February 20th to Thursday February 22nd) at The Balor, Ballybofey.

Three Days Of Rain
February marks the beginning of the high season for amateur drama in Donegal with the various drama groups putting the finishing touches on their entries for the National Drama Festival circuit.
We’ve already seen Letterkenny Music & Drama Groups production of Kieran Kelly’s Under An Irish Sky (on last Tuesday in An Grianan Theatre, Letterkenny) and this week it’s the turn of The Butt Drama Circle who’ll perform Richard Greenberg’s Three Days Of Rain in The Balor, Ballybofey.
Directed by J C Bonar, Three Days Of Rain is a haunting, humorous and deeply touching drama exploring love, infidelity, fate and how easily we can misinterpret the past. It’s a play set in two distinct eras – first in 1995 where Walker, his sister Nan and their childhood friend Pip reunite for the reading of Walkers fathers will.
The discovery of the secret journal of Walker’s late father raises many questions. The answers lie back in the 1960’s where the dark secrets of Walker, Nan and Pip’s parents are revealed and we find out just what really happened during those Three Days Of Rain?
I have to say I really love this script. It’s really drew me in when I read it – it’s a page turner with the questions posed in the modern day segment keeping you hooked and eager to find out the secrets contained in the big reveal. It should be even more enjoyable as a live play (although I kind of wish I hadn’t read it now as it’s kind of spoiled the suspense!).
The Butt Drama Circle present Three Days Of Rain (hopefully it’s just a play title and not a weather forecast) from Tuesday next February 20th to Saturday Febraury 22nd at 8pm nightly.
Tickets are €12 (€10 concession) available from The Balor Box Office on 0749131840 or online at www.balorartscentre.com

The Successful TD
There’s star power aplenty in the John B Keane comedy The Successful TD which plays An Grianan Theatre, Letterkenny this coming Friday and Saturday with comedian Jon Kenny (D’Unbelievables) and Mary McEvoy (best known of course for her portrayal of Biddy in Glenroe) in the starring roles.
The Successful TD is based on Keane’s The Letters Of A Successful TD and An Irish Minister Of State which was written in 1967. Tull McAdoo has enlisted the help of his daughter Kate as he seeks re-election to the Dail but his arch enemy, the local school teacher Flannery, has other ideas.

Worked
Director Michael Scott has worked with Kenny and McEvoy to come up with a new stage adaptation of the original play. Peppered with a gallery of madcap characters and displaying the trademark John B Keane edge for humour and satire this is a show that will have you laughing at Irish politics although probably mindful that what you’re watching on stage isn’t a million miles away from the political process of today.
You can see The Successful TD at An Grianan Theatre, Letterkenny this Friday and Saturday, February 16th and 17th at 8pm nightly. Tickets are €25 each (or 4 for €90) available from An Grianan on 0749120777 or you can book online at www.angrianan.com