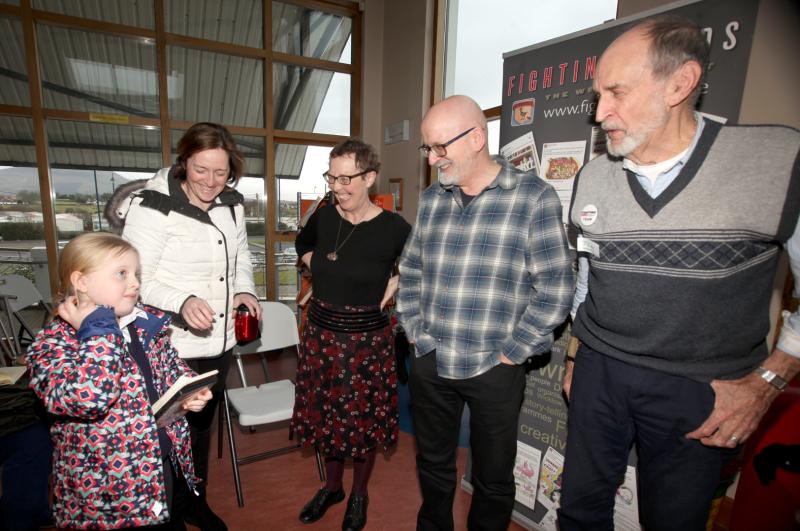 There was a great turnout in Bundoran Community Library this (Monday) afternoon for the visit of renowned novelist and Booker Prize winner, Roddy Doyle.

It was all part of the first anniversary celebrations for Fighting Words North West, a regional branch of the national Fighting Words creative writing programme founded by Roddy Doyle and Seán Love in 2009.

Earlier, Roddy had shared his enthusiasm and creative writing expertise with the second and third class students from Holy Family National School in Ballyshannon.

“It was super” he told the audience, “great imaginations and a very particular sense of humour!”

He was introduced by Tom Sigafoos, long a stalwart with the Allingham Festival, and now a volunteer with Fighting Words North West. Indeed, Tom introduced us to a dozen or so other volunteers who were in attendance, because as Roddy explained, volunteerism is the lifeblood of an organisation which has gone from strength to strength in ten years.

Monica Corish ensured that anyone else present who would be interested in being a volunteer with Fighting Words could sign up on the spot. Already, they’ve worked with schools in south Donegal, North Leitrim and Fermanagh. They also work with community organisations, writers and artists, and Roddy, with his quick wit and deadpan humour, ensured that there were many signatories on the day.

Proceedings began with a 5 minute video outlining the history of the organisation and ended with a very informative and entertaining Q and A session. Appropriately, the video began with the words…”Once upon a time” and ended with “To be continued”. Watch this space.