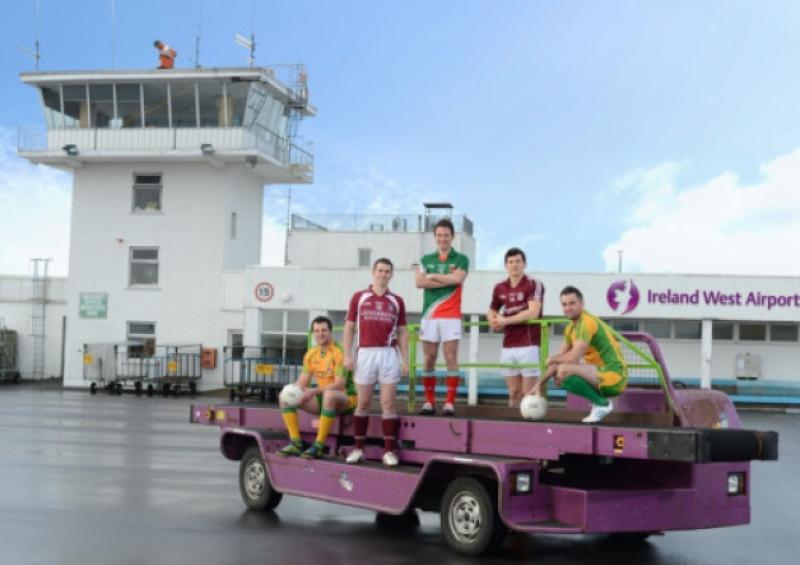 The best known GAA stars in Ireland, among them Karl Lacey and Michael Murphy, will join forces as ambassadors for Ireland West Airport Knock this coming summer.

The best known GAA stars in Ireland, among them Karl Lacey and Michael Murphy, will join forces as ambassadors for Ireland West Airport Knock this coming summer.

They are among five players who represent counties from the region the others are Alan Dillon from Mayo, Michael Meehan from Galway and Dessie Dolan from Westmeath.

The players will be the face of a new marketing campaign titled ‘Supporting Your Community’ which will be rolled out across various media channels throughout the summer season showcasing the important role Ireland West Airport Knock plays for the regions in which it serves.

The Airport currently employs over 125 people from around the region, supports 900 additional jobs and contributes a tourism spend of over €110m in the wider region.

flights from both London Luton and Stansted.

Karl Lacey, Donegal GAA star and current player of the year, speaking at the launch of the airport’s summer schedule said, “When the airport approached me about the ambassadorial role, I had no hesitation in accepting. As a frequent user of the airport I can see first hand the importance and invaluable role the airport plays for the region and it’s a great asset for people living in Donegal and the North West region, providing employment, connectivity to over 25 destinations and so convenient, only a little over an hour down the road. I’m delighted to play my part in supporting the airport in this regard.”

Donal Healy, Marketing manager Ireland West Airport Knock said, “We are delighted to have Karl, Michael and the other GAA lads as ambassadors for the airport. These players are brilliant role-models and some of the most recognised sports personalities in Ireland. As a community owned airport the airport prides itself on our ‘community ethos’ and we feel the GAA represents the perfect partnership for the airport given the lads represent counties from across our catchment region and have all given so much to their local clubs and counties over the last number of years”.