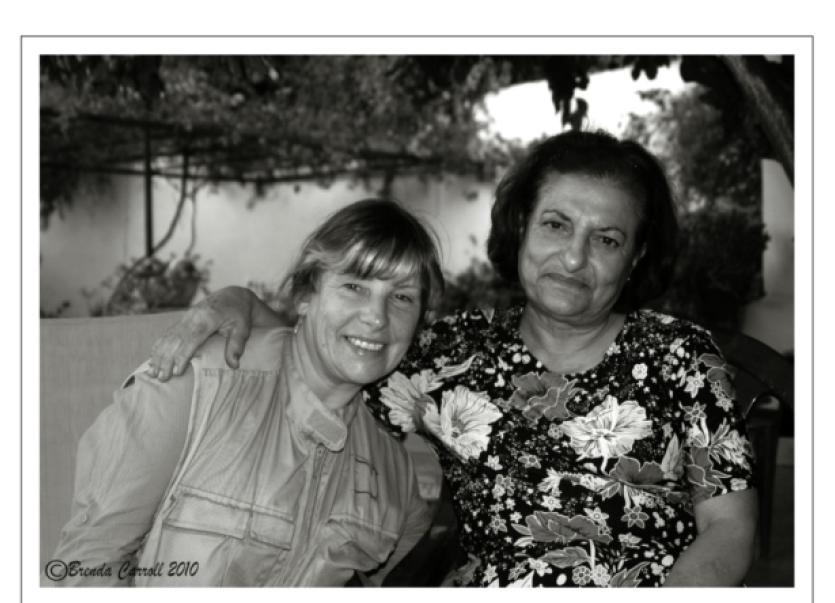 I am in the kitchen of Afaf’s home in the northern town of Azzun in the occupied West Bank, Palestine.

I am in the kitchen of Afaf’s home in the northern town of Azzun in the occupied West Bank, Palestine.

She is showing me how to cook mujuddura, a traditional dish of lentils and rice which I particularly love. The big stone house is quiet and cool. The faces of her ancestors stare passively from sepia portraits.

Later, we will sit under the lemon tree at a laden table and talk about life, literature and the world. This Palestinian home has been a place of refuge and peace to many internationals, as we work as human rights observers in the West Bank. It is where I come to forget every aspect of the Israeli military occupation. But even the walled garden and the old calm house cannot always keep the effects of ongoing colonization at bay.

Azzun was once home to over 600 Christians. Afaf Shattara and her brother Yusef are the only two left. This is not unusual. The percentage of Christians in Palestine has halved since the year 2000. In Jerusalem in 1948, there were 27,000 Christians. Today there are only about 5,000.

“Many people wrongly presume that the exodus is due to Muslim persecution,” Afaf explains. “We are all Palestinians. Christian, Muslim, it doesn’t matter. We all suffer the same injustices. We have restricted freedom of movement, we face the indignity of check points and are separated from our land, our family and friends by walls and barriers. People leave so they can live a normal life.”

Azzun is one of the most troubled towns in the West Bank, with a high rate of child arrests, frequent night raids and economic hardship. The mayor is pleased to have coaxed Afaf from retirement to sit on the local development council.

One September evening, Afaf, Yusef and I are stooping over a large basin of water, washing olives. It is a job for younger people and Yusef’s breathing is laboured and raspy. Twigs and leaves float on the top of the oily water as we plunge our hands deep down, scooping up olives and pouring them into 10-gallon drums. Afaf adds salt, lemon and clean water. They will be sent to their family in Jordan, America and elsewhere. The oil is not yet pressed, but will follow later. Traditional ways.

As we work, we discuss the many misconceptions between our worlds. Afaf, like many Palestinians, is highly educated, speaks wonderful English and has a healthy interest in politics. I tell her that many in the West would presume she was an oppressed Arab woman. She laughs. Afaf was the elected mayor of her town. Voted in unanimously. An independent candidate in local elections, she took her place among male legislators. She lists the strong female politicians of Palestine and bemoans that there are still not enough women decision-makers. I tell her the Irish government is 84 per cent male, even if half the population is female. She stops working and gives me a quizzical look. ”Walla! Not so different then, eh?”

My Arabic is pretty poor. We visit a friend, Layla, who taught in the (Muslim) school where Afaf was headmistress for over 20 years. Their talk is animated. I pick politely at the grapes and figs before me and listen to a conversation about school uniforms, makeup and the hijab (veil). I presume they are complaining. Afaf takes pity on my language skills and explains their opinion on school uniforms stifling the individual and how schools should relax attitudes to make up, jewellery etc. I mumble about how uniforms discourage fashion envy, etc. They are polite but unconvinced. I feel I am on the wrong side of the argument. Layla asserts, “Girls should be encouraged to be different.”

Family members beg Afaf to join them abroad. “I will visit when permits allow, but despite the oppression and the longing for a just peace, I will not be leaving the Holy Land. This is my home.”

Stella Carroll recently returned from the West Bank, where she was a human rights observer with the Ecumenical Accompaniment Programme. A resident of Sligo, She is media officer with Sadaka, which campaigns in Ireland for human, democratic and cultural rights for Palestinians.