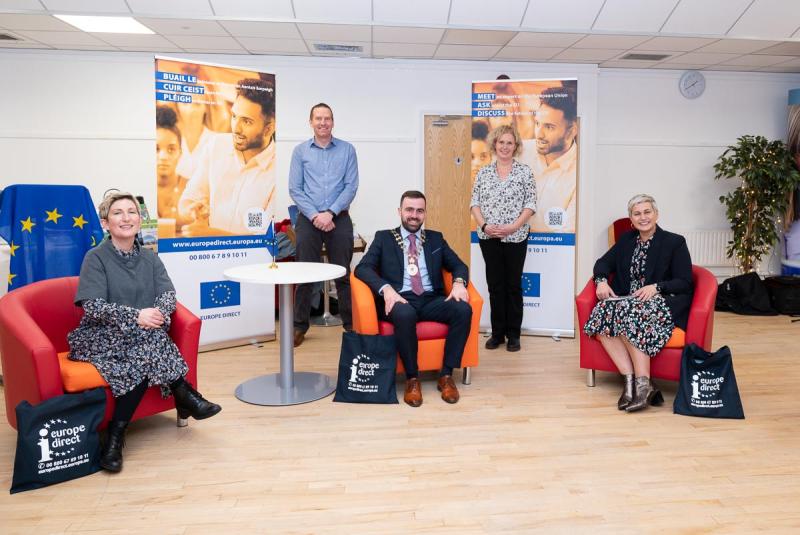 Letterkenny has retained its Europe Direct office after seven new generation Europe Direct centres were announced by the European Commission as part of a revamping of its network of information and communication points around Europe.

The facility at Central Library in Letterkenny has been there for over a decade, providing invaluable information to citizens on the operations of, and decisions made, at EU level. Its relaunch last week is a signal of the importance of the public service being provided to citizens in Donegal and across the north west.

Cathaoirleach of Donegal County Council, Cllr. Jack Murray officiated the relaunch and congratulated staff on their success to date, he said: “The work of the European institutions has never been more important. The world has become smaller with the explosion of the Internet and access to media and events from across Europe on our smartphone. Also, important to note is the explosion of social media use and the unfortunate knock-on effect of the rise of misinformation. It means that staff communicating the work of our EU institutions have to work harder to engage and build trust among citizens. I want to wish staff at Europe Direct Letterkenny well in their work and thank you once again for providing this excellent service to the citizens of Letterkenny and the wider county.”

Midlands North West MEP Maria Walsh delivered a keynote address on how she and her colleagues are communicating the work of the EU institutions at a local level, she said: "I have been an advocate and supporter of the work you all do throughout Europe Direct Centres. The re-launch of Europe Direct Letterkenny and the opening of seven new centres back in May showcases the vital network you’ve curated for Irish citizens and helps to reinforce the EU-Ireland connection. Due to the COVID-19 pandemic, the past two years have been incredibly difficult for us all and maintaining clear, concise and effective communication is of the utmost importance, in a world where we have seen disinformation across pockets in Europe.

"The opportunity to gather here today, while intimate, and evaluate the foundation of our EU-Ireland communication comes at a critical juncture as we reflect on our collective goals and actions for the upcoming year and years. Events held here in Letterkenny such as the Citizens Dialogue involving Transition Year students from Colaiste Ailigh and the recent Soapbox competition have generated a wave of interest and enthusiasm surrounding EU affairs. Continuing this dialogue will help to nourish our understanding of the EU-Ireland connection."

Europe Direct Manager Ciara Cunnane said her team looked forward to maintaining a centre of excellence and engaging the community in the work of Europe from access to publications and brochures from EU institutions and access to PCs to search for EU material, a freephone link to the Europe Direct Helpdesk as well as events, including talks, exhibitions and competitions.

Members of the public can access the services of Europe Direct Letterkenny at Central Library or virtually by e-mail on eudirect@donegallibrary.ie  or by phone on 074 91 24950.

Europe Direct Letterkenny is funded by the European Commission and supported by Donegal County Council.