Gleann Cholm Cille and Carndonagh have been shortlisted in the 2022 .IE Digital Town Awards

They are part of projects across 13 counties have been recognised for their use of digital technologies and innovation to transform or enhance towns and communities for the betterment of local people, community services, and wider society.

Shortlisted projects cover 7 award categories, all of which are in with the chance of winning a share of the total prize fund of €100,000

Following a competitive selection process by an independent judging panel, both Glencolmcille and Carndonagh have been shortlisted for two national awards in the Digital Tourism and Digital Business categories, respectively. 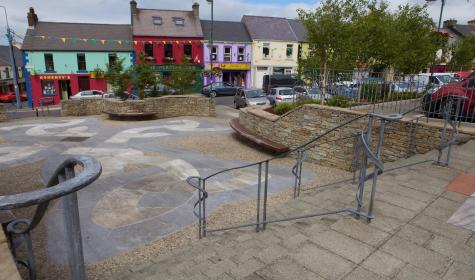 Carndonagh has also been shortlisted for an award

Gleann Cholm Cille’s “Building a digital cultural infrastructure for our community” project involved the production of an accessible digital repository of cultural heritage to promote both Irish language and tourism, while Carndonagh’s entry celebrates the development of the town’s digital gift card scheme," the organisers said.

Now in its second year, the .IE Digital Town Awards honour local town projects and people that are using digital innovation, technologies, and digital-first thinking for the betterment of towns, citizens, and services in the community.

The awards were launched as part of €1 million investment announced by .IE in 2021. There are 7 award categories for digital projects in the areas of education, tourism, business, and community, with three special awards recognising a Digital Changemaker, Digital Rising Star, Digital Local Hero. An Overall Winner will also be announced at the gala awards ceremony next month.

During the shortlisting process, the judging panel looked for digitally motivated community leaders who demonstrated digital thinking to creatively problem-solve and develop innovative ideas that ‘disrupt’ and enhance towns and communities.

Winners will be announced at a gala awards event on June 8.

An .IE spokesperson said: “We are seeing great examples of how communities and community leaders have stepped up and adopted new ways of thinking and doing, with digital tools and innovation helping them to not only survive but thrive.”

The shortlist for the 2022 .IE Digital Town Awards, was announced today by .IE, the managers of Ireland’s trusted online .ie address.

The overall winners will be announced at the gala awards ceremony which will take place on 8 June.

“We are proud to announce our shortlist of projects for this year’s .IE Digital Town Awards. Last year’s winners set the bar exceptionally high, and this year we are again seeing great examples of how towns and community leaders are stepping up and adopting new ways of thinking and doing, with digital tools and innovation helping them to not only survive but thrive.

“Whether it is creating an online visitor experience to drive tourism in a town or a digital voucher scheme to encourage local commerce, there are many inspiring examples of everyday champions and digital leaders in our communities that are transforming local life and society in innovative and creative ways.

“Those shortlisted in today’s announcement have demonstrated impressive digital improvements and enhancements in their local town, and we are delighted to be able to honour and recognise their efforts.

“We look forward to celebrating these achievements with all our finalists at the gala awards event next month.”

The .IE Digital Town Awards, announced by .IE in 2021 as part of its overall .IE Digital Town programme, is part of four-year €1 million investment initiative focused on digital enhancement and digital technology adoption in Ireland’s towns.