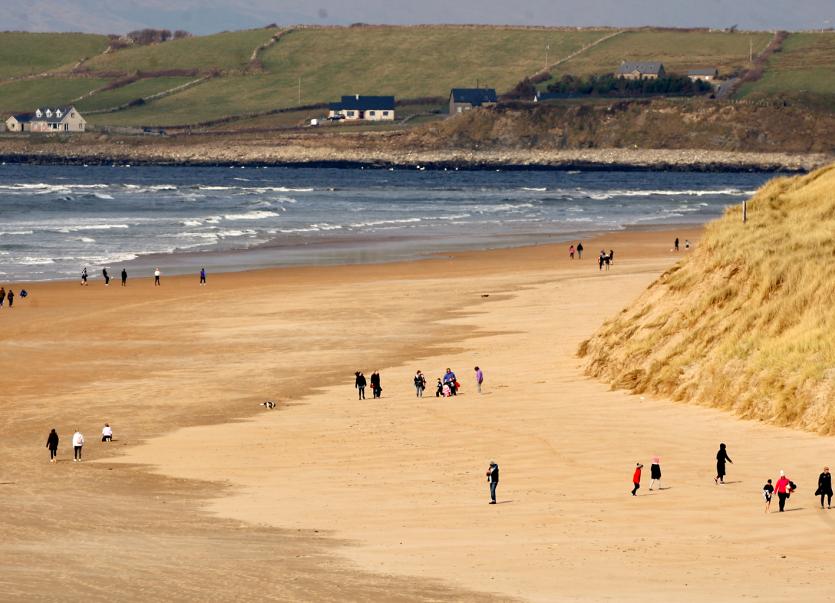 Restrictions on access to beaches, parks and walking trails are to be considered by The National Public Health Emergency Team after concerns over the weekend about the level of compliance with social distancing advice.

The meeting followed calls for beaches and other public amenities to be closed to restrict crowds gathering.

Local residents and politicians across Donegal expressed concern about the heeding of social distancing advice at some of the county’s most popular beauty spots and walks.

In south Donegal, crowds flocked to Rougey Walk, Tullan Strand and Rossnowlagh where even ice cream and fast food vans were in operation.

The number of people coming to areas of Donegal from other parts of the country to stay during the coronavirus lockdown also led to expressions of concern and calls were made for caravan sites and campervan facilities to close.

In Inishowen, locals expressed concerns about the number of people at popular beaches such as Lisfannon.

Accommodation providers in the county are continuing to receive queries about bookings during the lockdown as people in other parts of the country seek rural areas to isolate themselves in.

One Airbnb provider in the county said: “At the moment, there are over 300 properties available to instant book on Airbnb next weekend, including 254 entire properties. We really think it's unconscionable to allow visitors to come to Donegal in this life/death situation. Money really shouldn't come into it.”

The scenes of people enjoying the sunshine in large numbers were not restricted to Donegal as pictures showed crowds at beaches and popular scenic areas around the country.

Speaking on Monday, Taoiseach Leo Varadkar said if further measures were recommended then the Government would implement them. But also he said that people should not be berated for going to places that were crowded at the weekend.

“In fairness to those people they probably turned up not realising how crowded they were going to be,” he said.

A senior official said the Government would carry out consultations “to develop clear, simple public messaging so we can continue to enjoy these public spaces at this time”.

Elizabeth Canavan, an assistant secretary in the Department of the Taoiseach, said the Government would seek to keep public spaces open while reinforcing the need to keep distance between people.