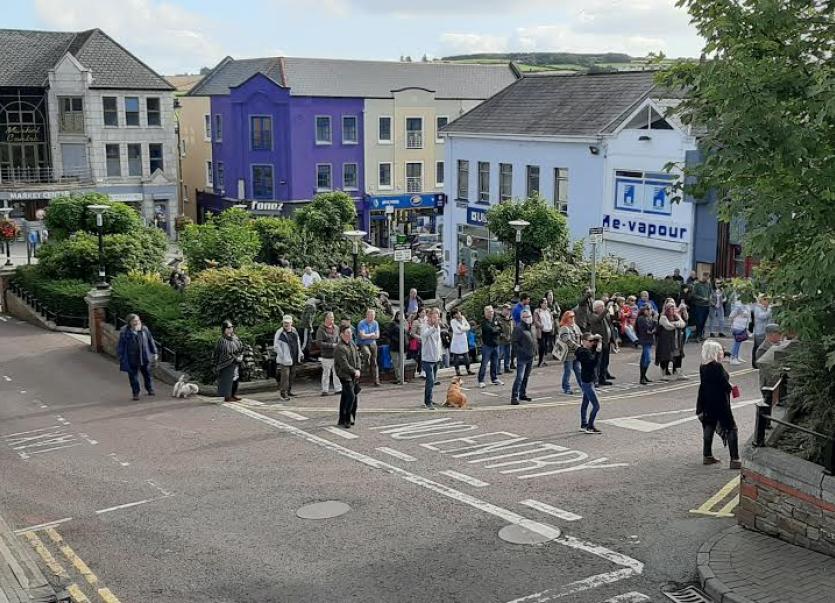 That was one of the many claims made at today's 'peaceful assembly' of people opposed to the restrictions imposed as a result of the Covid-19 restrictions.

The crowd of slightly over 100 gathered at the Market Square to hear all four criticising the Government's handling of the Covid-19 pandemic and the use of face coverings.

The crowd did not socially distance or wear face coverings apart from the media present. This led to some individuals challenging some members of the media which led a tense stand off with one protester in particular who did not shy away from letting his feelings be known.

One pro-mask protester did spend a time challenging the proceedings by shouting and filming with his phone camera but he disappeared after a short while when he found himself surrounded by pro-assembly supporters who decided to film him back.

Banners were display from the main stage with slogans like 'No More Abuse in Schools'; 'Stop 5G Towers'; 'Hey Mehole Tell Us About Agenda 21'; 'End Corruption Dump the Satanic Puppet Governments Now' along with a couple of tricolours.

Mr McMenamin urged those present to get the message to their local schools.

"You have got to put the teacher or principal on notice that if they harm your kids you have notified them that they have no public liability or backing from the Government because schools are making their own classroom buildings into prison camps and we're not going to take it. We need to march on the schools," he said.

He also urged people to stop putting their own children into "those prison camps".

"We can't put our kids in the firing line," he added.

Mr Gilroy claimed the lockdown was "totally unnecessary" and was causing psychological damage to children, increasing the number of suicides and it was leading to evictions because of restrictions placed on people being allowed to attend court sittings.

He added it was also ironic that the Government now claimed to be concerned about health when in the past they were responsible for covering up child abuse in the churches and laundries for years; responsible for women dying because of the misdiagnosed cervical tests and they weren't long taking health care cards away from children with cancer.

"Now all of a sudden they are so concerned about your health that you must wear a mask. They are also responsible for the last 10 years of austerity. Remember they care about your health but they forced you to bail out gamblers on the stock exchange who were making billions in profits and didn't share any of their profits or pay taxes.

"But when they lost you were forced to bail them out and what were the consequences - children going to bed hungry, suicides and loss of businesses and cases where so many young children had to emigrate and the break up of Irish families - as we have to believe they are interested in our heath."

He added compliance with wearing masks seemed to be about 95% but if this was so why was there such a rise in cases.

He said he also felt people were being "bullied" into wearing them by militant mask wearers and claimed it was probably more danger to cross the road to buy a mask than the virus itself.