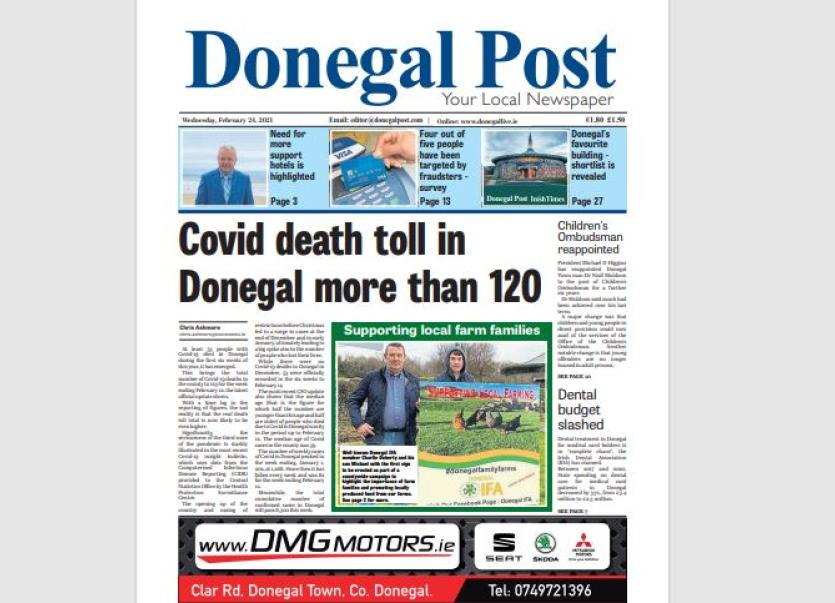 At least 53 people with Covid-19 died in Donegal during the first six weeks of this year, the Donegal Post reports today.

This brings the total number of Covid-19 deaths in the county to 123 for the week ending February 12, the latest official update shows.

With a time lag in the reporting of figures, the sad reality is that the real death toll total is now likely to be even higher.

Significantly, the seriousness of the third wave of the pandemic is starkly illustrated in the most recent Covid-19 insight bulletin, which uses data from the Computerised Infectious Disease Reporting (CIDR) provided to the Central Statistics Office by the Health Protection Surveillance Centre.

The opening up of the country and easing of restrictions before Christmas led to a surge in cases at the end of December and in early January, ultimately leading to a big spike also in the number of people who lost their lives.

While there were no Covid-19 deaths in Donegal in December, 53 were officially recorded in the six weeks to February 14

The most recent CSO update also shows that the median age (that is the figure for which half the number are younger than this age and half are older) of people who died due to Covid in Donegal was 83 in the period up to February 12. The median age of Covid cases in the county was 39.

The number of weekly cases of Covid in Donegal peaked in the week ending, January 1, 202, at 1,268. Since then it has fallen every week and was 82 for the week ending February 12.
Meanwhile, the total cumulative number of confirmed cases in Donegal will pass 8,300 this week.