Judge Éiteáin Cunningham, a native of Letterkenny, presided at a sitting of Buncrana District Court, held at Letterkenny courthouse 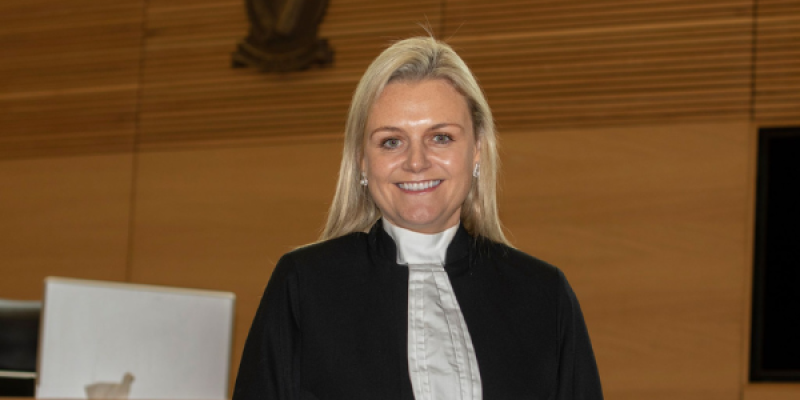 Donegal’s new District Court judge has been officially welcomed to the bench.

“We are delighted to have you here and we hope that you stay for a long time,” Mr Mac Lochlainn said.

“I assure you of the co-operation of myself and my colleagues in this area.”

Judge Cunningham said: “That you for the very warm welcomed. I am delighted, privileged and honoured to be appointed to District Number 1 and I look forward to working in al the various areas throughout the District.”

Mr Mac Lochlainn appealed to the new Judge for her support in the reopening of Carndonagh courthouse.

The courthouse in Carndonagh was closed in March 2019 and it is estimated that it could take €150,000 to properly refurbish. Sittings of Carndonagh District Court are now held at Letterkenny courthouse.

“Hopefully you will be on board to get Carndonagh up and running again. The President of the District Court is keen for Carndonagh to reopen. People are traveling from as far away as Malin Head, Glengad and Culdaff with no public transport.”

Sittings of Buncrana District Court, which have been heard in Letterkenny since the onset of the Covid-19 pandemic, will be heard at Buncrana courthouse from September. It had been hoped for a June return, but that date has been pushed back to September.

Originally from The Glebe, Letterkenny, Ms Cunningham was educated at Loreto Secondary School in Letterkenny.

She is married to Sligo solicitor, Seamus Monaghan and they have two children.

Since 2007, Ms Cunningham worked with Hegarty Armstrong Solicitors in Sligo.