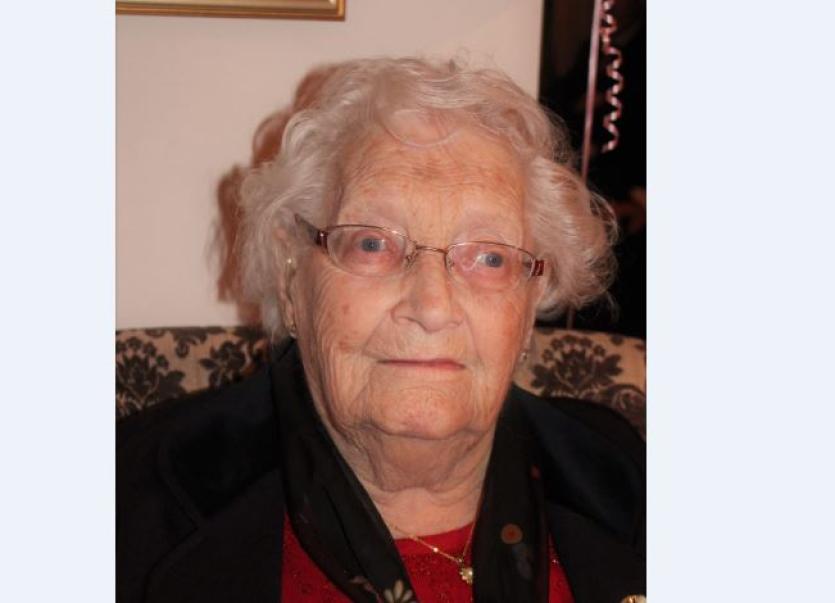 The well known Gaoth Dobhair personality, Mrs. Bridie O’Donnell (Diver) née Boyle of Carrick, Derrybeg passed away at the Falcarragh Community Hospital on Monday, April 27. A daughter of the late Garda Sergeant John Boyle and Bridget Boyle, she was born in Darraghan, Fintown in 1927.
At that time it was common practice that members of An Garda Síochána were transferred from area to area on a regular basis and on account of this the Boyle family lived in various locations throughout Ireland, but Bridie lived most of her early life in Glencolumbkille.
She moved to Carrigart when she was aged 21 where she secured a post as a seamstress in the town. It was here she met her husband, Packie Diver. They married in Glencolumbkille in 1951 and relocated to Gaoth Dobhair where Packie was manager of the local Cope in Glassagh, Derrybeg.
They had seven children: Mícheál, Bríd, Seán, Marion, Patrick, Bernadette and Hubert. Hubert was a one-week old baby when Packie died suddenly at the County Final between Gaoth Dobhair and Dungloe in September 1961. Due to certain restrictions at the time, Bridie could not attend the funeral. This was a devastating time for Bridie being left with seven young children.

Publican
Following the death of her husband, Bridie took over the lease on Johnny Neill Ferry’s Pub, ‘Teach Néill’ in Baile Bhriaghnaigh (Derrybeg). At that time her parents, John and Bridget Boyle came to live with her in Carrick, Derrybeg.
They helped her to care for the children while she worked long hours in running the pub while at the same time rearing seven young children. For a number of years she successfully ran this public house.
It was a popular pub at the time with the monthly Fair Day held there and also the popular Derrybeg Hall which was located next door to the premises.
Bridie remarried in 1966 to Jimmy Phaddy Dhonnchaidh O’Donnell from Inismaan Island off the Gaoth Dobhair coastline. Two children were born to them, Patricia (Pádraigín) and Martin. Jimmy took ill and also died at a young age . She took great care of Jimmy during his illness and also cared for her own parents before him. In 2009 Bridie suffered a further cruel blow with the death of her daughter, Bríd Diver Boggs, who was living in Malin,
Bridie took great pride in rearing her family, she was fond of the craic and the company and had great love for the young children of the next generations.
She had an unyielding faith and in 2001 was accepted into the third Order of the Franciscans in Ards Friary, Creeslough. She had been ill for a number of years before her passing and her son Martin took great care of her at home.
She was initially admitted to Letterkenny University Hospital for two weeks prior to her stay in Falcarragh Nursing Unit at the beginning of March where she passed away. She was waked at the family home.

Funeral
Her Requiem Mass was celebrated in St. Mary’s Church, Derrybeg on Tuesday, April 28. Due to the current Government restrictions the wake and funeral were for family only.
The Mass was broadcast live on Facebook. The celebrant of the Mass was an Dr. Ró Oirmh. Pádraig Ó Baoighill, Sagart Paróiste Ghaoth Dobhair and concelebrant was Fr. Brian Ó Fearraigh, C.C., and Séiplíneach Phobal Scoil Ghaoth Dobhair.
The soloist was Eibhlín Nic Suibhne and the organist was Hugh Hiúdaí Beag Gallagher. Aisling Mhic Cumhaill played on the violin while Eibhlín Nic Suibhne also performed on the tin whistle.
The psalm was sung by Bridie’s daughter, Bernadette Ní Dhuibhir Uí Dhúlacháin and her daughter, Ceithleann. Domhnall Lobhaois (Lewis) played a tune on the pipes as his Granny started on her final journey from her home. People lined the roadsides en route as her remains made their way to the graveyard in Magheragallon.
The family are forever indebted to Martin who took such excellent care of their Mum.
Bridie was the last surviving member of her family and is survived by her sons, Mícheál, Seán, Patrick, Hubert and Martin; daughters, Marion, Bernadette and Patricia; grand-children, great-grand children, sons-in-law, daughters-in-law, and family circle.
Let perpetual light shine upon her and may she rest in peace.