OBITUARY: Aideen Crowe - a life full of love and friendships

A member of the Stephens family in Ballyshannon, Aideen was one of eleven children 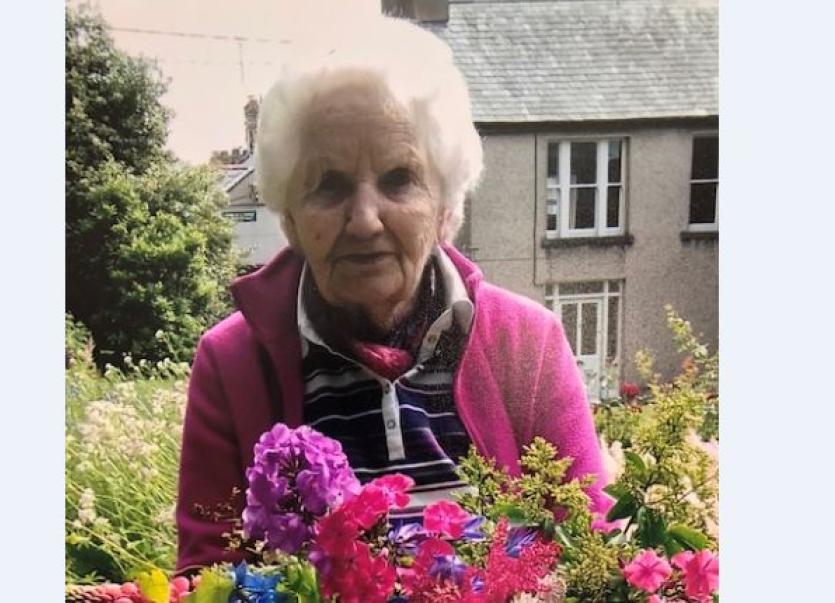 The recent death, on Monday, May 18, of Aideen Crowe (nee Stephens) in her 96th year evoked a mixture of emotions.
Great sadness of course for the passing of such a wonderful woman, but a sense of gratitude that she had lived such a wonderful fulfilling life, full of love, friendships, flowers, music, sport and at the heart of it all her family, her grandchildren and her great grandchildren.
A member of the Stephens family, Aideen was one of eleven children: Maura, Eithne, Patricia, Roisin Patrick, Aideen, Blaithnaid, John, Brian (who passed away recently) and Liam , her last surviving sibling, now resident in Mullingar .
The Stephens family were associated with the business, musical, community and sporting life of Ballyshannon for over 200 years.
Aideen’s late father Patrick J. Stephens ran a thriving drapery business on Main Street, Ballyshannon, a family enterprise originally founded by her grandfather. In more modern times that family business tradition had been continued by her late brother Brian.
The premises and the adjoining Georgian residence, formerly the Customs House, were replaced in later years by the Saimer Court Shopping Centre .
The family also had long-established business connections with Belleek.
Aideen was born in Cloch na nUan, Chapel Street in 1925 and returned to live there after her marriage in 1947 to Tommy Crowe, a native of Galway city.
Tommy came to Ballyshannon as a young Civil Engineer to work on the Erne Scheme in 1945. After the commissioning of the hydro-electric station Tommy continued his career with the ESB in Ballyshannon with responsibilities also in Cliff Power Station, Gaoth Dobhair, Arigna, and Bellacorick, Co. Mayo.

Enthusiastic attitude
Aideen had a positive and enthusiastic attitude. She participated fully in all aspects of life in Ballyshannon throughout the decades and was fortunate to enjoy good health into her nineties.
Aideen loved music and played the violin with the Ballyshannon Musical Society for many of their productions over the years. She was also a long serving member of Kilbarron Parish Altar Society and put her flower arranging skills to good use in that role.
In earlier years she was a member of the local Chapter of the Society of St. Vincent De Paul.
She sang in the Resurrection Choir for many years and loved attending daily Mass in St. Patrick’s – a short walk from her home.
Gardening and flowers were an enduring part of Aideen’s life. The beautiful garden at her home at Cloch na nUan, Chapel Street, a treasure trove of trees shrubs, flowers and well-manicured lawns were so often favourably commented on by neighbours and passers -by .
Her greenhouse, salvaged from the gardens of Laputa House, before that area was submerged by Assaroe Lake, gave her many hours of pleasure .
Aideen’s family had a rather unique connection with the sporting and cultural life of Ballyshannon as her grand uncle Fr James O’Daly was the founder and first President/Chairman of the Aodh Ruadh GAA Club in 1909.

Uncle
Her uncle, Cecil Stephens Snr. was the first Aodh Ruadh club secretary. Both men were also instrumental in establishing a branch of the Gaelic League in the town. Two of Aideen’s brothers, Patrick and Brian, played senior football with Aodh Ruadh .
In her own right Aideen had a great interest in many sports. She was a very keen golfer and a former Lady Captain in Bundoran Golf Club. Past Lady Presidents and Captains of Bundoran Golf Club formed a Guard of Honour as Aideen’s remains arrived at St. Patrick’s Church on the morning of her funeral.
She was also a very astute card player and played Bridge regularly in Ballyshannon, Bundoran and Belleek until she was 92.
Aideen’s Requiem Mass was celebrated in St. Patrick’s Church on Wednesday, May 20.
Her remains reposed privately at home for the previous two days. Neighbours, friends and relations stood along Chapel Street as Aideen’s funeral made its way from her home to the church. Her cortege was accompanied by her grand-children who formed a Guard of Honour.
Mass was celebrated by Fr. Cathal O Fearraí P.P. Aideen’s family sang and were accompanied on flute by her daughter-in-law Triona.
After Mass many local people paid a silent tribute to Aideen as her funeral made its way through Ballyshannon to the Abbey Cemetery.
Fr. Jonathan Flood led the prayers and presided at the graveside. Aideen’s grandson Oisin, on clarinet, led the family in a lovely rendition of The Flowers of the May, a fitting tribute to a much loved mother, grandmother and great grandmother.
Aideen is survived by her daughters Mary (Murt), Phena (Seamus), Frances (Tom); sons Paul (Phyllis), Patrick (Triona), grandchildren and great grandchildren; her brother Liam, in-laws, relatives and friends to whom sympathy is extended.
Ar Dheis Dé go raibh a anam uasal .