Mary, who celebrated her 90th birthday in January, was a very special person blessed with many talents 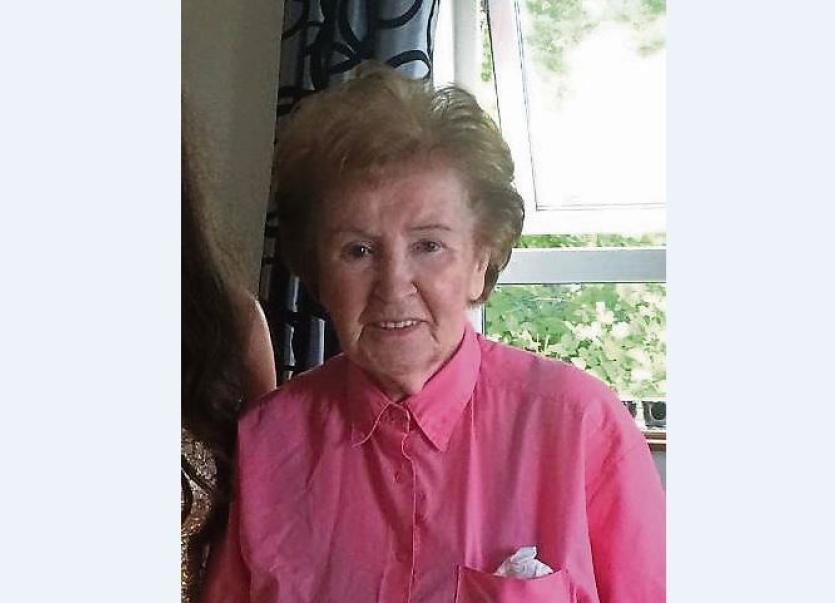 The late Mary Doogan, Kille at her 90th birthday celebrations in January of this year

It was with deep regret and great sadness that the communities of Kilcar and Killybegs learned of the recent passing of Mary Doogan (neé McBrearty), late of Kille, Kilcar.
Mary celebrated her 90th birthday back in January and had been in great spirits right up to her sudden passing, which was non Covid related.
Mary was a truly remarkable woman who epitomised the very definition of community spirit and enterprise, that were her personal hallmark and that of her generation.
In January, when Mary celebrated her 90th birthday, her family held an open invitation party for anyone who wanted to celebrate this big milestone with her.
She thoroughly enjoyed the day and was overwhelmed with the number of people that came to wish her well.
Mary was outgoing to the end and loved meeting and speaking with people.
It was this special connection that endeared her to so many.
Mary was born Margaret Mary McBrearty on January 26, 1930, the eldest child of John McBrearty (Johnny Miley) and Kathleen Bowler in Granhey, Killybegs.
She attended Fintra National School under the tutelage of Headmaster McCauley.

Gold Fáinne
All her school work was taught through Irish and Mary had gold Fáinne for fluency in the Irish language and wore it proudly.
She later trained as a post office clerk in Killybegs post office and went on to work in Inver, Bruckless (where she lived with the Gallagher family for six years), and Dunkineely post offices.
Later in life Mary went back to post office work when her children grew older.
She did locum work in Killybegs, Kilcar and Carrick post offices but retired completely when the post mistresses, Mary and Kathleen Cunningham, retired in 2005.
In November 1961 Mary married Joe Doogan from Strabrinna, Kilcar, and moved to Strabrinna.
In December 1969 the family relocated to Kille, Kilcar.
To say that Mary was kept busy outside of her work would be a huge understatement with an energy to match.

Civil Defence and Pope John Paul II
Mary was an active member of the Civil Defence in the1970s and 1980s and was on duty when Pope John Paul II came to Ireland in 1979. She served as peace commissioner of oaths from 1994.
She held the position of secretary of Kilcar Parish Council for many years and was a member of the founding committee of the Aislann Cill Chartha.
She also served on the board of Tír Boghaine Teo.
Her great knowledge and interest in local heritage and culture saw her attendance at weekly meetings of Coiste Cultura Cill Chartha right up until the Covid-19 lockdown.
Mary attended Mass daily until the lockdown and proudly held a gold pioneer pin.
She was an active member of Kilcar and Killybegs choir and enjoyed many outings with both.
And if that wasn’t enough, Mary had many hobbies. She was an avid gardener. She loved outdoors, loved nature, flowers, shrubs, vegetables, fruit, trees etc. She knew every name and her gardening book was always open.
She started many gardens for people and was a adept at knitting, crocheting, stamp collecting and a daily crossword lover.
When she was writing quizzes she was socialising and meeting people, who were involved in many local interests.
She collected and posted parcels of clothes to orphanages in Dublin and Fahan - her house was a drop off point for this.
For Midwest Radio, Mary contributed a weekly 'thought of the day'.
After her husband Joe died in January 2013, the Killybegs Active Retirement Group was a great life line for Mary.
Every Wednesday afternoon and Thursday morning they met and socialised, planned outings and dinners out which always had Mary’s name (usually first) on the list.
Mary became ill suddenly in her home on Sunday afternoon July 5.
She passed away peacefully in Altnagelvin Hospital, Derry later that evening.
She is sorely missed by her family and many, many friends.

Survived
Mary is survived by her three daughters and five grandchildren; daughters Concepta (Strabrinna, partner Oliver McIntyre); Antoinette (Kille, married to Martin Gillespie, three children - Tara, Conor, Ciaran); Edel (Kille, married to Declan Cunnigham, two children - David and Kim).
She is predeceased by her two sisters - Anna (marriedto Frank McCallig) and Bernadette (married to Pat Laffan) and one brother - Tommy (married to Angela O’Donnell).
Her removal took place on July 8 for funeral Mass in St Cartha’s Church, Kilcar at 12 noon.
For those who were unable to attend the funeral Mass was streamed live.
Interment followed in Kilcar cemetery.
May her gentle soul rest in peace.