MEEHAN'S MUSES: Best not to argue with Judge Judy! 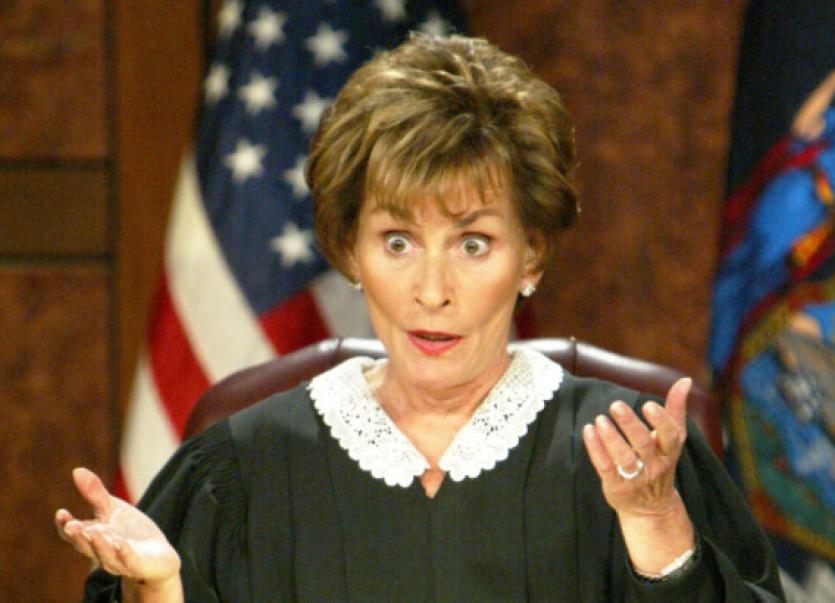 It’s not easy growing old, especially at this time of year, with constant cold, rain and darkness falling around five o’clock in the evening.

Combine all that with having to watch Judge Judy on television on these wet afternoons, would I now be declared an official old age pensioner?
So I decided to do a bit of research on this popular show and I was pleasantly surprised as to what actually goes on.
The Judge Judy Sheindlin Show recently picked up a Lifetime Achievement award at the Emmys in Los Angeles. Not only that but she now commands worldwide domination of the daytime television schedules.
Her show is now officially the most syndicated in history and Sheindlin’s immense popularity with Irish pensioners continues to grow.
Last year she was the highest paid entertainer in the world with a salary of 147 million dollars.So popular is this legal lady that the New York Times recently noted that the legal eagle is now often mentioned in family obituaries i.e, “She loved her grandchildren, doing the crossword, and watching Judge Judy”.
There are usually two cases per episode, found by an army of researchers who search through small claims motions for interesting back stories. The litigants defend themselves and the show pays any damages the Judge decides upon, as well as travel and accommodation.
There is a court audience made up of actors. She was a real judge for many years. Court bailiff, Officer Petri Hawkins Byrd has been at her side since she was an actual judge at Manhattan’s Family Court New York. She has written several books on the legal system and its problems.
For all her tough talking on camera about consequences and responsibility, her show actually makes it possible for people to avoid the consequences of their actions. If the defendant loses, the show will cover the costs of their settlement. The plaintiff gets their money quickly and everyone gets an appearance fee and a trip to Los Angeles.
In 2013 during a visit to Ireland she attacked people who depend on social welfare.
This most famous television judge continues to win awards and makes millions. I wonder does she know what it’s like to be dependant on weekly social welfare.

Children be good - or else
Christmas, as they say, is just around the corner and snow is expected any day now.
Could the children soon be making snowmen, sleighing, throwing snowballs, and enjoying themselves outdoors?
In the19th century the lawmakers in our country had no difficulty, particularly in our cities, passing laws to send children to prison for playing games in public if their activity was considered a nuisance. The first children reformatories were introduced in Ireland in 1859, the introduction of compulsory schooling for children under 14 in 1891.
In this 32 year period more than 29,000 children were sent to reformatories and almost 28,000 sent to adult prisons.
The Dublin Police Act of 1842 criminalised play, stating ”every person who shall fly any kite or play any game to the annoyance of the inhabitants or who shall make or use any slide in any street or other thoroughfare to the common danger of the public shall be liable for a fine of forty shillings”.
As poor families could not afford to pay fines a child could be sent to prison for 24 hours or considerably longer. During this time 87 children were locked up for 24 hours or more for causing annoyance by throwing snowballs or making ice slides, knocking on doors and running off.
Children who ran away from workhouses could be prosecuted for stealing the workhouse uniform they were wearing when escaping. If a child set fire to their workhouse bed they faced four years penal servitude or four years in a reformatory.
A fourteen year old, Ellen Sullivan, ran away from an industrial school. She was sentenced to two weeks in jail followed by a three year sentence in a reformatory.!!