Through the centuries we Irish had prayers for every occasion, every part of the day 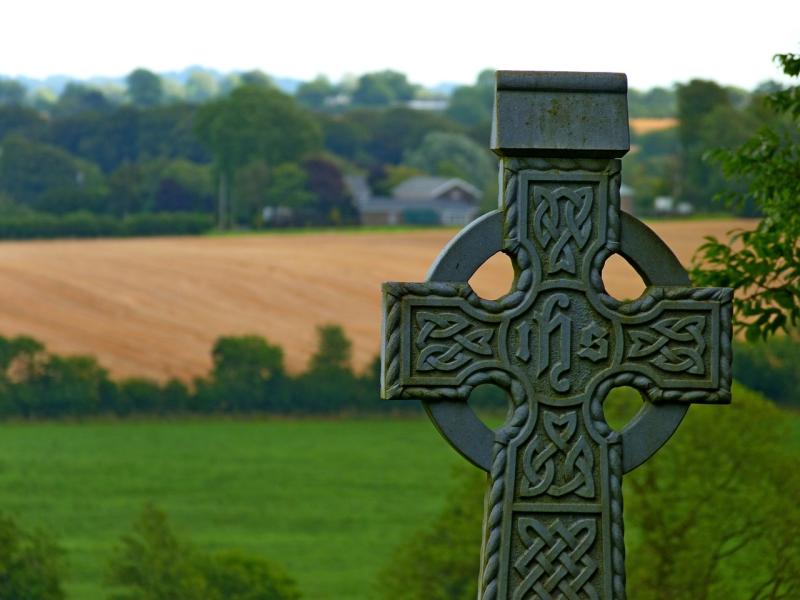 At our home even though they were meagre, my mother gave out grace before meals

Our best known religious custom, was the daily ringing of the Angelus bell at noon and six o’clock in the evening.
All work would stop, especially in the fields, rosary beads taken out and the Angelus recited.

Indeed certain religious communities still also ring their bells at six in the morning. Nowadays the Angelus bell is only rung at six in the evening and only in rural areas where there are Catholic churches.

Going back to my old altar boy days we practiced the dying out language Latin,which we used to recite Angelus Domini (Angel of the Lord) hence the Angelus.

This custom originated when monks called in the faithful from the surrounding countryside for prayers. At our home even though they were meagre, my mother gave out grace before meals. ”Blessed O Lord and these thy gifts which of thy bounty we are about to receive through Christ our Lord, Amen”.

Before going to bed we were taught to kneel and recite our prayers. Passing a church, bless yourself “In the name of the Father and the Son and the Holy Spirit”. Or passing a cemetery, people also made the sign of the cross on their forehead “May the Lord have mercy on them”.

And if they had relations interred there they prayed for the repose of their souls. Even to this day, especially the elderly or sick, bless themselves with the relic of a particular saint who they had great faith in - Saint Theresa (the Little Flower), Saint (Padre) Pio or Saint Martin de Porres among the most popular.

If something was lost, a quick prayer was said to St Anthony or to St Jude who is the saint of lost causes; if going for a hospital procedure, for solace, rosary beads taken with them.

Through the centuries we Irish had prayers for every occasion, every part of the day. In areas rural or city worldwide many Irish still carry on these age old traditions. Fishermen: “May the good luck of John and Peter be on our nets”.

Those on a journey if they are anxious bless their forehead, “In the name of the powerful Holy Spirit may Mary and her Son be with us on our journey”.

Emigrant Irish wakes still recite the age old prayers and sayings “Beannacht De le hanmain na marbh” God’s blessing on the souls of the dead” - as I witnessed at one such wake in the Bronx, New York two years ago where the deceased was third generation Irish.

In Ireland of bygone days on Christmas Eve, special importance was given when the Christmas candle was lit by the youngest member of the family while head of the family prayed, “Go mbeirimid beo ar an am seo aris, “May we all be alive this time next year”.

‘Sister Concepta Honoured’
Last Friday evening I attended a concert ‘Songs of Peace and Glory’ from the Ulster University Choir held in St Patrick’s Churchm Ballyshannon. This well known choir have performed for USA President Bill Clinton on his 2014 visit to Derry. More recently they played Carnegie Hall, New York last year commemorating the centenary of the end of World War One.

The choir’s conductor is a Glenties man, the very respected Shaun Ryan a senior lecturer at the Ulster University Music Division. He has conducted combined chamber choirs in Ireland, Scotland, England and has been engaged as choirmaster for performances at Carnegie Hall New York for seasons 2016 and 2018.

Tributes were paid to the great works over the years promoting music throughout Donegal by the late Jim Lafferty (Glenties) and very popular Ballyshannon nun Sister Concepta who was in attendance last Friday evening, receiving a well deserved standing ovation from the audience and choir.