‘Bard of Ardara’ to remember the late Packie Manus Byrne

It Occurs to Me with Frank Galligan 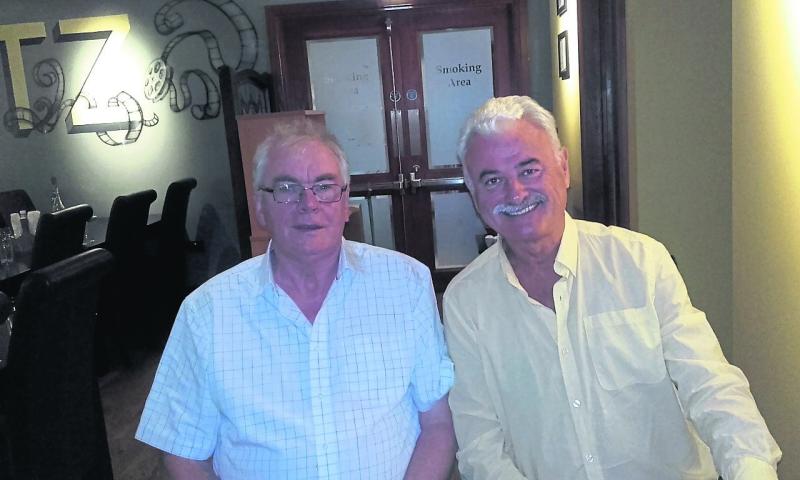 This weekend sees the launch of ‘The Bard of Ardara’, a competition to commemorate the late great Packie Manus Byrne.

From 2021, a highlight of the ‘South of the Border’ Festival weekend on Valentine’s weekend will be a final line-up of some 10 bards from all over Ireland and beyond who will deliver their humorous pieces, from which ‘The Bard of Ardara’ will be selected.

Appropriately, the one and only ‘Bard of Armagh’, Patsy O’Hagan, will join ‘The Bard of Tyrone’, Declan Forde, and will feature in the Corner House and Beehive throughout the weekend. Also joining them will be our own songwriter supreme, Patsy Cavanagh, whose ‘Home to Donegal’ is accepted as the Donegal anthem.

So, let’s remind ourselves how this weekend of song and verse began. Back in August 2017, I stumbled across the Jimmy Kennedy/Ardara connection, and within months Stephen McCahill was formulating the first ever festival.
With over 30 No. 1 hits to his name, Kennedy is rightfully acknowledged as one of the greatest songwriters of the 20th century. In his son’s biography, “The Man Who Wrote The Teddy Bear’s Picnic”, JJ Kennedy wrote of his RIC grandfather Joseph Hamilton Kennedy that he was posted to Ardara “...in late 1900 and it was there he met Anna Baskin for the first time - not at a local beauty spot on the Donegal coastline - but in church.

"The tall, slim bachelor officer with the farming background might well have stood out among the congregation as a perfect catch for Anna, who was by then a 26-year old teacher. They must have got to know each other quickly - they cannot have courted for more than a year before he proposed - they were married at the Parish Church of Ardara on the 5th of September, 1901.”

He was transferred to Omagh a few months later, and “...10 months after they were married, Jimmy Kennedy was born in a room ‘over the shop’ - the police station the town’s Pretoria Terrace, an unlikely start to his career as an international songwriter!” By the time he died in 1984, he had written 2,000 songs, 50 of them ‘evergreen’, including "Red Sails in the Sunset", "South of the Border", "We're Going to Hang out the Washing on the Siegfried Line", "The Isle of Capri", "Istanbul (Not Constantinople)", "My Prayer", "Teddy Bears' Picnic", "Cokey Cokey" (later known as the ‘Hokey Cokey’), "Roll Along Covered Wagon" and "Harbour Lights".

He won two Ivor Novello Awards for his contribution to music, was awarded the OBE in 1983 and in 1997 was posthumously inducted into the Songwriter's Hall of Fame. His Ardara mammy would have been so proud...as JJ writes in the bio: “Like his mother, he had a softer sentimental side...and the artistic side, the escapist, the dreamer, came out in his songs - where else would he have found so many words of romance to write the ballads on which his reputation was to be based?”

An old neighbour said to Greencastle singer/songwriter Patsy Cavanagh: “Your song will go further than your foot!” How right he was...last year, Patsy was presented with a special IMRO award to “mark the longstanding contribution that his song ‘Home to Donegal’ has made in Irish music circles”.

The presentation was made in the Daniel O’Donnell Visitors Centre in Dungloe by the man himself who also was a recipient of a special award from IMRO. Daniel said of ‘Home to Donegal’...”It’s iconic, a chorus, and an anthem”... and the day before was being sung on the street by the masses during the Mary from Dungloe festivities. Daniel added: “If the postman and milkman are whistling it, it’s a hit.”
Patsy’s first song back in the 1970’s was the lovely ‘Foyle Waters’, inspired by a returned emigrant of some 40 years who recalled the Moville liners sailing up the Foyle. In particular, he remembered people soaking clods of turf in paraffin oil and waving them in farewell at departing loved ones as they sailed by. Patsy recorded it and a few others on cassette and sent it to the local Inishowen pirate radio stations. The airplay was tremendous and he is forever grateful to the loyal DJ’s who made it all possible.
His mother was listening to RTÉ Radio as well and tipped Patsy off about a programme called ‘Sounds Promising’, which invited new songs from budding writers. He sent off a cassette of ‘Can’t Hold The Years Back’ and was pleasantly surprised to get a phone call from producer Shay Healy who famously said: “You’ll be buying a seed for the hammock!” (In other words, a palm tree for his leisure!) Brendan Shine was going to record it...fame at last..if not exactly fortune.

In time the legendary Peter Bardon would look after the song publishing and he too was in attendance in Dungloe with CEO of IMRO, Victor Finn. Like ‘Foyle Waters’, ‘Home To Donegal’ was a homecoming song, written in the late 1980’ and recorded by a number of artists, including Mick Flavin and John Kerr. But when Daniel recorded it, it became the anthemic and much loved song it has become. “I knew when I had it finished, I had a good wee song” says the modest Patsy.

Legendary Nashville based singer/songwriter John Prine won his 4th Grammy Award recently. His wife, Fiona Whelan, comes from Ardara and what a lovely gesture from John last Sunday night when he entertained the service users in Shanaghan House. That is typical Prine...as his songs have long exemplified, he’s a warm wonderful human being...whose words come from the heart. .

“You know that old trees just grow stronger,
And old rivers grow wilder every day.
Old people just grow lonesome
Waiting for someone to say, "Hello in there, hello."