'The reaction of both parties since the results came in, has proved those folks dead right' 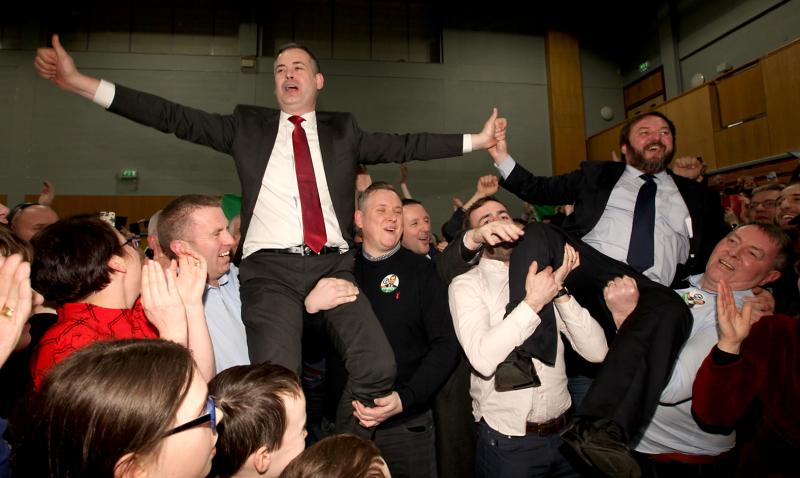 While the diehards were always going to support the party, I would contend many of those who voted Sinn Féin for the first time ten days ago did so not out of any particular love for the Shinners but out of a kind of rejection of the arrogance and smugness of both Fianna Fáil and Fine Gael.
And, I also would contend, the reaction of both parties since the results came in, has proved those folks dead right.
I have got out of the habit of listening to the Joe Duffy Show on RTÉ – it’s a whinge fest most of the time, and it can get you down just hearing complaint after complaint – but during last week I caught about 20 minutes of the programme and a couple of women contributors really summed up, for me, why people are looking for radical alternatives.
One lady – from Cork, if I recall correctly - said she was brought up in a council house, her father worked for the ESB, and she and her husband reared four children. They worked hard, paid their taxes etc., but now three of those children are in Australia and unlikely ever to return. And she was living with ever increasing costs and charges, and poor health services.
Another said she had listened to the Claire Byrne Show the previous night and she said she really resented almost being ‘chastised’ by the representatives of the two big parties for daring to vote for the Shinners. The implication, she said, was that they had no right to do so.
(It was claimed on Facebook too that one noted broadcaster suggested young people ‘were stupid’ for voting SF but as I can’t confirm that I’ll not mention any names.)
Later the same day I turned on the evening news when Fianna Fáil’s Jim O’Callaghan was being interviewed and he came out with the line that SF policies would turn Ireland into Venezuela. Come on!

As Pearse Doherty, who was also being interviewed, pointed out having policies on freezing ever increasing rents and seeking to reduce massive hospital waiting lists is hardly extreme leftist politics.

O'Callaghan's comment was symptomatic of much of the over the top reaction from the main parties.

Micheál Martin has been implying also in almost every media interview in recent days that there is something sinister about ‘men behind the scenes’ having a big say in Sinn Féin, that somehow this is unique to that party. Has he ever heard of Dominic Cummings? Boris Johnson’s chief of staff has way more power than any behind the scenes person in Sinn Féin. The joke in London last week was that Boris was lucky to keep his job in the Cummings' cabinet reshuffle.

And the Fianna Fáil leader keeps claiming too that in the book, ‘Burned’, journalist Sam McBride makes the conclusive case in regard to undue influence of these shadowy figures. What Martin doesn’t say is that in the exact same book – which I have read – McBride clearly states that ‘Spads’ (special advisers) in the DUP were basically running the show, often over-ruling the ministers and senior servants. So is Micheál suggesting it’s sauce for only one goose?

Like yourself, I don’t know what Sinn Féin would be like in government; they could be a disaster, they could be brilliant. But the attraction for many voters was that unlike FG and FF the Shinners have never been in government and therefore they represent change. And people want change. That’s way beyond obvious.

I was in an establishment in Ramelton on Friday morning having a cup of coffee. Behind me was an elderly woman who wasn’t shy about expressing her views to the assembled throng. “I voted Fine Gael all my life” says she loudly “but this time I voted for the Shinners.”

I had to move off but I would loved to have gone over and asked her what made her change her mind as, as you well know, in Ireland once people start voting for a particular party you have a better chance of getting a train off a track than getting them to change their allegiances. Why, at her age did she change hers?

Leo Varadkar and Micheál Martin are both totally within their rights to lead their parties in whatever direction they want. And it’s accepted totally that many people in their parties would have issues with Sinn Féin. That’s a given. But what is coming across in recent days is a kind of arrogance in the media where spokespersons for those two parties suggest that the electorate has got it wrong, that voters didn’t understand the implications of what they were doing. It's rankling with a lot of people as reaction on both national and local media clearly shows.

Being in power for so long has given some senior people in both parties a kind of arrogance, a belief that theirs is a superior intellect and knowledge and that the electorate should see it their way and repent the error of the their ways before it is too late.

The importance of believing yourself was never so important

I have been involved in primary school debating for the past couple of years as an adjudicator and I am constantly amazed at the standard of our children. In fact I’m embarrassed when I think at that age I was only interested in playing cowboys and Indians whilst these kids are making cogent and highly intelligent arguments about world events.

Last week I was in Woodland NS outside Letterkenny where the debate was on the topic that the Irish education system did not prepare our kids for the real world.
At the end of the debate the chairperson of the adjudication panel, Phil Dalton, did an absolutely superb summing up when she told the kids in attendance that her daughter broke her heart when she emigrated to Australia. And that she breaks her heart every time she comes home and goes away again.
But, said Phil, that daughter in Australia is doing well, and that a lot of the big companies ‘Down Under’ wanted Irish kids because our standard of education was so good. She told them to have faith in themselves, not to undersell themselves, to believe in themselves and to go for it. It was the best summing up of a debate I have heard in many a long day.
And one other thing: As someone who went to a school where we were all white and all the one religion it is amazing to see the diversity that’s out there these days.

Not everyone is called Pat, Seamus or Mary these days!

We have friends over from Tasmania. They are here about a week. They arrived in a howling gale and as I sit looking out my window there is another howling gale. They left about an hour ago to go exploring in Inishowen. Gales don’t bother them.
These are people who left a country about a fortnight ago where the temperature was about 25 degrees. And I can but wonder why they decided to come here in February knowing full well the vagaries of our weather.

But whatever the motivation every morning they are up about 6.30/7am – ridiculously early – while I turn over hugging the blankets for at least another hour.
What’s amazing, if not actually insane, is they love it!