IT OCCURS TO ME: Trumping the virus 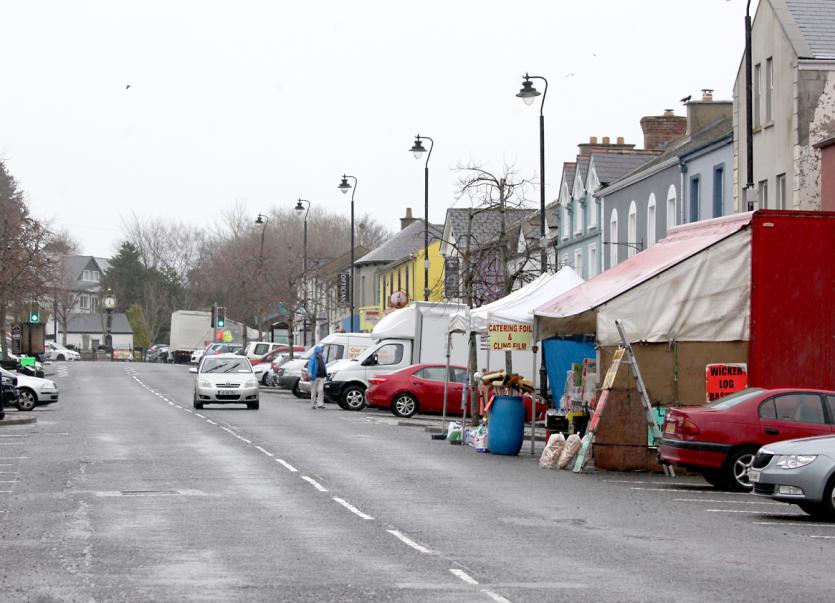 A lone market stall on the very quiet main street in Belleek on St. Patrick’s Day. It’s a day when the border village is usually packed with traders and visitors Picture: Thomas Gallagher

I’m writing this last Monday morning. WhatsAppa - many of which contain hysterical nonsense - are flooding my phone. Rumours of a total lockdown are imminent.
I can vouch for supermarket panic this morning as I saw buttermilk, flour and toilet paper disappear off the shelves.
Diesel and petrol prices are plummeting in the main, bar the usual gombeen men whose greed knows no bounds.
I got a text from a teacher in Derry who is livid that his wife, who has a serious neurological disorder, has had to attend school with their son. So intent on reminding us that she is following the ‘UK’ instructions, Arlene Foster is also paranoid about not being seen to follow Dublin’s example.
Anyway, Covid 19 has ensured that the RHI scandal has moved down the pages. Meanwhile, Boris has decided that Herd Immunity might be the solution, i.e. if a high enough proportion of individuals in a population are immune, the majority will protect the few susceptible people because the pathogen is less likely to find a susceptible person.
Most experts have slammed the decision. The Brexit mentality may be the death of many more!

THE ‘SHEWING UP’ OF BLANCO TRUMP!
I’m sure many Ballyshannon readers and theatre goers remember a great production of George Bernard Shaw’s play, ‘The Shewing Up Of Blanco Posnet’. I thought of Shaw last week, in particular his adage: “The liar's punishment is, not in the least that he is not believed, but that he cannot believe anyone else.”
Here is Donald Trump’s Coronavirus Timeline:
January 22:
Trump: “We have it totally under control. It’s one person coming in from China. It’s going to be just fine.”
February 2:
Trump: “We pretty much shut it down coming in from China.”
February 10:
Trump: “A lot of people think that goes away in April with the heat—as the heat comes in.”
White House acting budget director Russell Vought: “Coronavirus is not something that is going to have ripple effects.”
February 24:
Trump: “The Coronavirus is very much under control in the USA. . . . Stock Market starting to look very good to me.”
Trump’s top economic adviser, Larry Kudlow: “You should seriously consider buying these [stock market] dips”
[Note: The Dow Jones ended February 24 at 27,960. It closed March 11 at 23,553.]
February 26:
Trump: “[The number of people infected is] going very substantially down, not up.”
“The 15 [cases] within a couple of days, is going to be down to zero.” [Note: Two weeks later, there were over 1,000 confirmed cases in the United States.]
February 27:
Trump: “It’s going to disappear one day, it’s like a miracle.”
February 28:
Eric Trump: “In my opinion, it’s a great time to buy stocks or into your 401k. I would be all in . . . let’s see if I’m right.” [Note: The stock market closed at 25,409 on February 28. It closed at 23,553 on March 11.]
March 2:
Trump on a coronavirus vaccine: “I’ve heard very quick numbers, that of months.” [Note: Immunologist Anthony Fauci, the director of the National Institute of Allergy and Infectious Diseases, has repeatedly said that a vaccine will not be available for a year or year and a half.]
March 6:
Trump: “I like this stuff. I really get it. People are surprised that I understand it. . . . Every one of these doctors said, ‘How do you know so much about this?’ Maybe I have a natural ability. Maybe I should have done that instead of running for president.”
Trump: “I didn’t know people died from the flu.”
Trump on whether or not to bring coronavirus patients on a cruise ship to shore: “I like the numbers being where they are.”
Trump: “Anybody who wants a test gets a test.” [Note. This wasn't true at the time and remains dangerously untrue today. The previous day, Vice President Mike Pence said, “We don’t have enough tests today to meet what we anticipate will be the demand going forward.”]
Larry Kudlow: “We stopped it, it was a very early shut down, I would still argue to you that this thing is contained.”
March 9:
Trump: “Good for the consumer, gasoline prices coming down!”
Trump: “So last year 37,000 Americans died from the common Flu. It averages between 27,000 and 70,000 per year. Nothing is shut down, life and the economy go on. At this moment there are 546 confirmed cases of Coronavirus, with 22 deaths.”
March 10:
Trump: “It will go away. Just stay calm. It will go away.”
March 11:
Trump: “If we get rid of the coronavirus problem quickly, we won’t need [economic] stimulus.”
Trump [in response to a question from CNN’s Jim Acosta asking what he would “say to Americans who say you are not taking this seriously enough and that some of your statements don’t match what health experts are saying”]: “That’s CNN. Fake news.”
March 12:
Trump: “We have ’em very heavily tested. If an American’s coming back, or anybody’s coming back, we’re testing. We have a tremendous testing setup where people coming in have to be tested.
“And if they are positive, and if they’re able to get through—because, frankly, if they’re not, we’re not putting them on planes, if it shows positive…” [Note. This is not true.]
As someone who has admitted that he doesn’t read, I presume Blanco is unaware of Bertrand Russell.
The great philosopher, historian and writer may have been thinking of the present incumbent in the White House, when he wrote: “The whole problem with the world is that fools and fanatics are always so certain of themselves, and wiser people so full of doubts.”
The Daily Show has referred to Blanco’s handling of the crisis as a ‘Pandumbic’. Like the disease itself, I’m afraid it may have to get worse to get better.