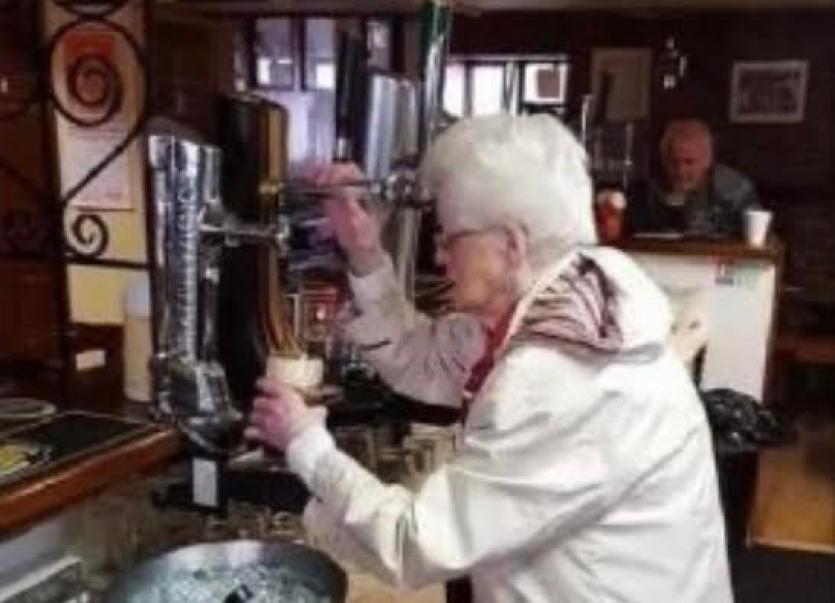 Nora McGinley was a landlady with a heart of gold who worked hard and will be deeply missed by all those who knew and loved her.
The legendary publican of formerly McGinley’s Central Bar, Carrick passed away on July 3, 2020.
Her nephew Noel Cunningham recalls days in the bar - watching Nora slice ham on one side of the bar as three pints of stout sat settling on the other side of the flap.
“Having met her husband John, they married in Birmingham, returned to Carrick and ran a rural shop and pub,” Noel recalls.
Mr Cunningham recalls fond memories of that time, ‘a different era’ where Nora would have settled many disputes among customers and fed lodgers on the Angelus bell of 6pm.

Fair day
His earliest memory in the pub is of the fair day - a day of losing and gaining money, a day of drink and banter, and a day when Nora would have been exceptionally busy with all those who arrived into the Central Bar.
Noel recalls that four years into their busy life in Carrick, Nora’s husband, John, passed away and her life dramatically changed.
“My beloved aunt had to face this alone four years after getting married and with a son of 10-months, my auntie Nora lost her much-loved husband John.”

Diplomat
Life was different for Nora after that and she spent many of her days talking to customers and enjoying the daily life and the comings and goings in Carrick.
“She was a diplomat and a doormat and she was described by one customer as a Sergeant Major with a heart of gold,” Noel fondly recalled.
Nora’s Central Bar was also home to lodgers and she managed the work with the help of Joe Gallagher who was a great help to her.
Several people spent their lives living above the busy bar and shop.

Beyond her time
Times were different, Nora was a lady, who was ahead of her time, most of the women spent their time in the bar, at that time, in the snugs.
Nora is recalled as having a sharp wit and an acerbic tongue which could disarm the most articulate person- from any walk of life.
Noel remembers her enjoying the ‘odd spat’ at times and concedes she may even have encouraged a few.

Traditional music
During the 60s and 70s norms began to change and life became more liberated.
Nora’s shop was the first to become a supermarket and have traditional music sessions in the bar. The sessions attracted tourists to the locality.
“Times were hard too and Nora was an employer that gave many young people a good start in life. In a time where poverty was never far away, she was very kind helping with food and money gifts in her own quiet way to people in real need,” Noel said.

Driving
In later years, she took the odd break and visited Noel in Cork with his mother and his aunt Madge.
Nora was a formidable force behind the wheel, Noel recalls, and would not have been the most heedful of road traffic legislation, at that time. Noel recalls that she may have ignored a few red lights en route, she may have gone around the roundabouts the wrong way and she may have ignored the course of one-way streets but she made the journey home safely albeit with somewhat shaken passengers.

Respect
Over the years, Nora’s beloved Central Bar rang with music, song and craic.
The respect she garnered over her many decades behind the counter was evident as people lined the streets of Carrick to show their affection and appreciation for Nora on the day of her funeral.
Many people attended the graveyard to show their respect for Nora and her family. Noel Cunningham sang ‘Our Lady Of Knock’ as a mark of respect for Nora’s faith and belief in Our Lady.
“Covid-19 didn’t dim the sheer beauty and poignancy of the day as we buried a legend in the beautiful beloved earth of ‘In Through‘ - the affectionate name for the independent state that lies beyond Kilcar and stretches to Glencolmkille,” Noel recalls.
Noel said her son, Seamus, is left with memories of ‘a beautiful farewell to his beloved mum’ and recollections of growing up in a country pub with his wonderful mother.