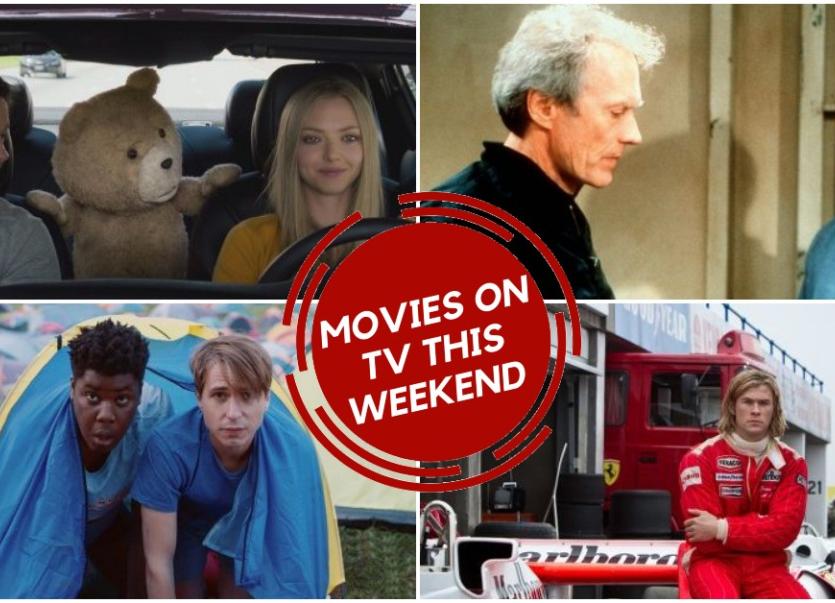 Friday has rolled around once more - here's your guide to the best movies on TV this weekend.

An accidental telephone call brings together a grieving American mother and an Irishwoman, who has just discovered that her husband is leaving her for his pregnant mistress. The two strangers, both at a crossroads in their lives, agree to exchange houses for two months and try to rediscover their inner strengths. Drama, with Andie MacDowell, Olivia Williams, Stephen Rea and Heike Makatsch.

A criminal is released from prison with revenge in mind. His brother was murdered while he was behind bars. He hunts down the men responsible, pursued by a cop on the verge of retirement and a ruthless hitman. Action adventure, starring Dwayne Johnson, Billy Bob Thornton, Oliver Jackson-Cohen and Carla Gugino.

The 1976 Formula One Championship season is dominated by a fierce rivalry between two contrasting racers, as daredevil British driver James Hunt and methodical Austrian defending champion Niki Lauda put their lives on the line to outdo each other on the track. Fact-based drama, starring Chris Hemsworth, Daniel Bruhl and Olivia Wilde.

The foul-mouthed talking teddy bear is horrified to discover that he counts as property according to the law. He and his human best friend hire a pot-smoking lawyer to help them fight a court case and get Ted legally recognised as a person. Comedy sequel, starring Mark Wahlberg and Amanda Seyfried, with the voice of Seth MacFarlane.

A married woman attempts to ignore the Nazi officer stationed in her home during Germany's occupation of France, but a passionate affair soon develops between them. Can they keep their love a secret from her domineering mother-in-law? Second World War drama, starring Kristin Scott Thomas, Michelle Williams and Matthias Schoenaerts.

A New England seaside town's tourist season is turned into a nightmare by a giant killer shark. The local police chief's efforts to protect the public are thwarted by the greedy mayor, forcing him to join forces with a grizzled fisherman and an enthusiastic marine biologist to hunt and kill the monster predator. Steven Spielberg's thriller, starring Roy Scheider, Richard Dreyfuss and Robert Shaw.

A couple who have finally rid themselves of the college fraternity next door become stuck with even worse new neighbours in the shape of a raucous college sorority. In desperation, they turn to their old enemies in getting rid of the new arrivals. Comedy, starring Seth Rogen, Zac Efron, Rose Byrne and Chloe Grace Moretz.

A reporter becomes convinced a death-row prisoner is innocent of murder and races against time to save him from execution - but with only 12 hours to go, his chances of finding enough evidence to secure an acquittal are desperately slim. Crime thriller, directed by and starring Clint Eastwood. With Isaiah Washington, Denis Leary, Lisa Gay Hamilton, James Woods and Bernard Hill.

Young couple Kate and Singe's lives are turned upside down when Kate is diagnosed with an incurable breast cancer. Over the course of her final few months, she creates a list - writing her thoughts and memories down to help the man she loved create the best life possible for their two sons after she is gone. Drama based on the book by St John Greene, starring Rafe Spall, Emilia Fox and Elaine Cassidy.

When Nick's girlfriend dumps him at graduation, he has a colossal meltdown in front of the entire university. He's convinced his life is over, but his best mate Shane has the perfect solution - three days at a music festival. With the help of `festival aficionado" and certified oddball Amy, Shane tries to get Nick to embrace the music, the mayhem and the mud. Comedy, starring Joe Thomas, Hannah Tointon, Hammed Animashaun and Jemaine Clement.