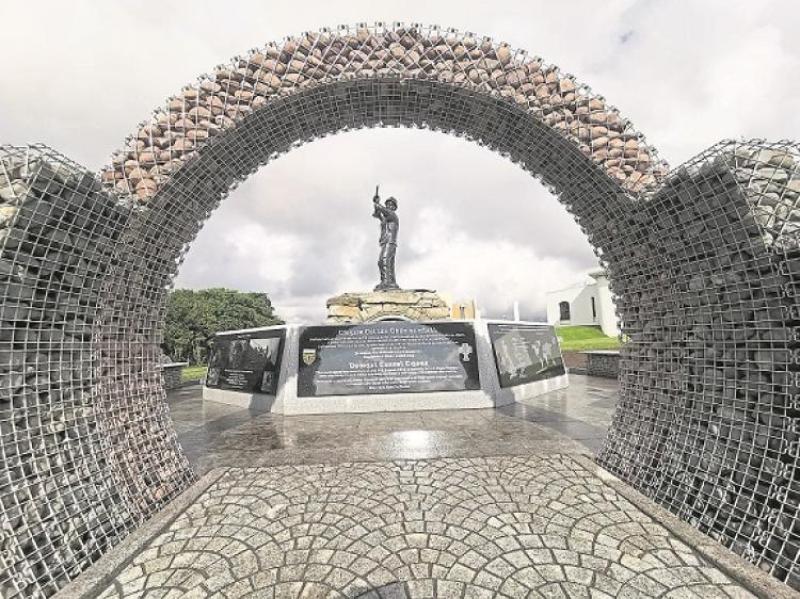 In August last year, hundreds of people gathered in Dungloe to attend the unveiling of a monument in memory of the Tunnel Tigers from Donegal who lost their lives contracting on tunnels and subways in the UK and US.

Hundreds of men from Donegal are believed to have died in accidents in tunnels in Britain and the US stretching back to the 1940s. The monument at the St Crona's Church now help ensure those men will never be forgotten.

The name Tunnel Tigers has been bestowed on the thousands of young men from Donegal who traveled the world constructing tunnels.

People traveled from across the globe to be in attendance at the event. This year, due to the pandemic the situation is different and people who would like to come home to visit the monument may not be able to.

However, the Tunnel Tigers are not forgotten this year.

Singer and songwriter, Owenie Curran penned a moving song about those men a year after the official unveiling of the monument.

Posting the recording to his Facebook page and the Donegal Tunnel Tigers page, he said: "The Names on the Wall. A song about the 79 men named on the monument in Dungloe that was erected last year in memory of those young men killed in tunnel work.The are nick-named the 'tunnel tigers,' l always think they were much more than that, they were fine human beings, of minds, muscles and hearts."

The monument was sponsored by tunnel contractors Josie Gallagher, Tony McFadden, Dermot Kane and Tommy Gallagher. Dungloe company McGee Memorials designed and constructed the monument.
Those in attendance were told the monument was dedicated to the memory of all Donegal miners, whether they were killed in the tunnels by accident or as a result of illness/disease associated with working underground and to the many miners who are no longer with us for other reasons.

The chairman of the Donegal Tunnel Tigers Memorial Committee, Hugh Rogers said: "One year ago ... we unveiled the monument in Dungloe, in memory of all those Donegal men that were tragically killed in mines and tunnels throughout the world and to the 100's of other miners that sadly died due to tunnel related diseases.

"The monument built in Dungloe, on the grounds of the new chapel, is a fitting tribute to these brave men. I would like to thank all of the committee that worked so hard over the course of a year to help get this monument erected."

He urged people who may be in the Dungloe area, at this time, to call to the monument and say a few prayers for all those men whose health had failed as a result of working underground.

He said he hoped that next year, if things improve, people could meet at the monument August 4 and celebrate Mass followed by a dinner dance. He said that such an occasion would allow miners, both young and old to meet up, once again.