German radio listeners to take ‘A Sunday Stroll’ in Donegal 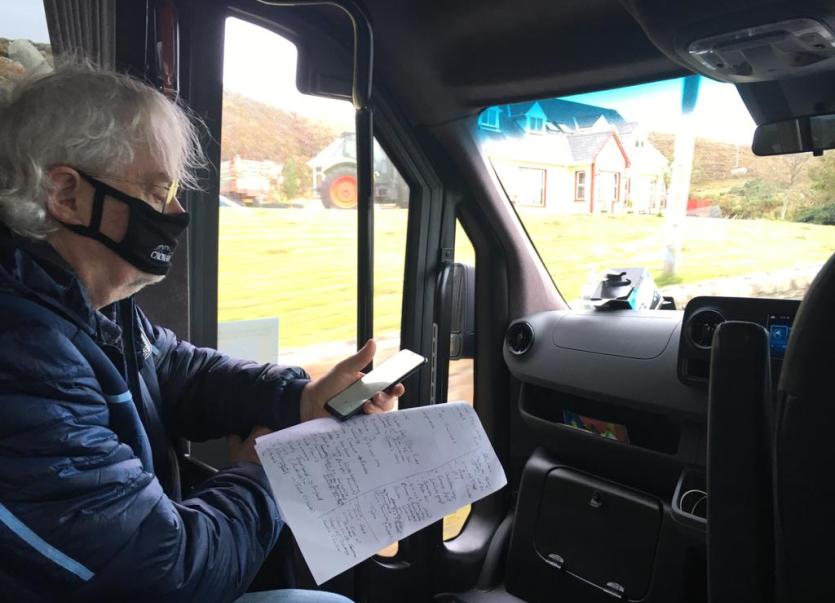 A German man who has been visiting Donegal for over 40 years is bringing his affection for the county to radio listeners in his native country.
A trip on a bus service between Falcarragh and Dungloe is to feature on a weekly travel magazine programme on Deutschlandfunk, a public broadcasting radio station in Germany.
The radio segment is being made by Harald Juengst, who has been spending time in Ranafast since 1978.
A former teacher, Harald also travels the world as a storyteller, telling Irish fairy tales. To date he has visited 20 countries on five continents.
He has a huge interest in Irish music, which he has been playing on different German radio stations for 35 years, and has brought Irish acts including Altan to Germany for concerts and radio performances. 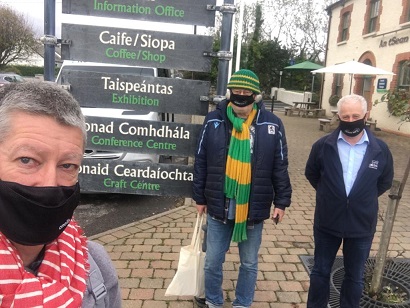 Reuben Ó Conluain, Harald Juengst and Cronan MacFadden from the Local Link bus service, about to set off from Falcarragh

Harald’s love of Donegal, its people, music and traditions, inspired the idea behind the radio piece which was recorded on the daily Local Link 966 service between Falcarragh and Dungloe.
Regular users of the bus will feature on the programme which is to be broadcast on the programme Sonntagsspaziergang, which means A Stroll on Sunday, and features journeys from around the world.
Harald, who is based in Duisburg, said the radio piece will be “a sound picture” featuring sound impressions, comments and stories recorded and collected from the driver, Cronan MacFadden, and passengers - including Reuben Ó Conluain who was invited by Harald on the journey - along with his own commentary.
“It is one of the most scenic public transport routes I have ever experienced,” he said.
“It should hopefully work as a little contribution for my beloved Donegal in these dull times. So this feature wouldn't do any harm to promote Donegal as a fascinating holiday destination in the future, I reckon.” 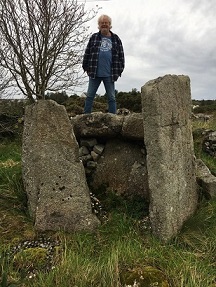 Harald Juengst taking a stop on the bus journey at the Ardsbeg dolmen, Gortahork

Harald made the bus trip earlier this month on a trip back from Germany.
“I go very much into detail and it is a type of a portrait, a sound picture. There are statements from the driver, statements from people on board, my statements. We are passing through Clannad land, so there will be music. So it is a very colourful sound picture of west Donegal through the eyes out the window of the 966 Local Link.”
The route takes the bus along the coast and through Gortahork, Magheroarty, Brinaleck, Derrybeg, Bunbeg, Crolly and Loughnaure.
“We go by Loughanure, we have the Crolly stone, we have the Crolly waterfall, we have the new whiskey distillery. We go through Clanand land, turn left at Dobhar where the Clannad sculptures are out. Pass Bunbeg, Derrybeg, talking about Raidió na Gaeltachta, talking about the Irish language. Then we see Bád Eddie and all the lovely islands and the beaches.”

Backdrop
Errigal provides the backdrop to the journey which is filled by music and stories from the passengers.
“The people I had on board were absolutely fantastic - full of stories, full of knowledge, full of magic. They were singing, lilting a tune, singing about Tory as we passed about Tory.”
Although the bus service is a regular service which serves local people going about their daily business such as going to the shops, the pharmacy or the doctor’s, the beauty of the scenery attracts the occasional tourist.
“By accident, there was a German tourist on board that day, Gabi Wolf. She has been coming to Donegal for 25 years and every time she is over she takes the bus. She has her own car but she loves the relaxed atmosphere and to be driven by the local bus. It is a completely different view for her. It is €3 for one trip. For €3 you are just passing through scenic paradise with lots of characters and stories.”
The programme will also feature music from local performers such as Clannad and Altan.
Due to the Covid-19 pandemic, this summer was the first one since 1978 that Harald has not spent in Donegal, but he was able to return in September to record the radio piece.

Charity Album
Harald, who plays the bodhrán, is back in his native Duisburg but he is continuing to work on a fund-raising album he has been recording with Donegal artists.
The resulting CD will be sold to raise funds for Médecins Sans Frontières. The recordings have been made at Manus Lunny’s studios and feature Mairéad Ní Mhaonaigh, Ian Smith, Caitríona and Briege Solan, Conny Mhary Mhici Ó Gallchóir, Tom Byrne, John Michael O’Donnell, Tony and Ann Croke, Suzanne Uí Ghallchòir, Jacqui Sharkey and Eamon McElholm as well as Manus Lunny.
“So Manus and myself are working very hard to keep the ball rolling and are hoping for a mighty launch when it’s suitable - hopefully not in the too far distant future.”