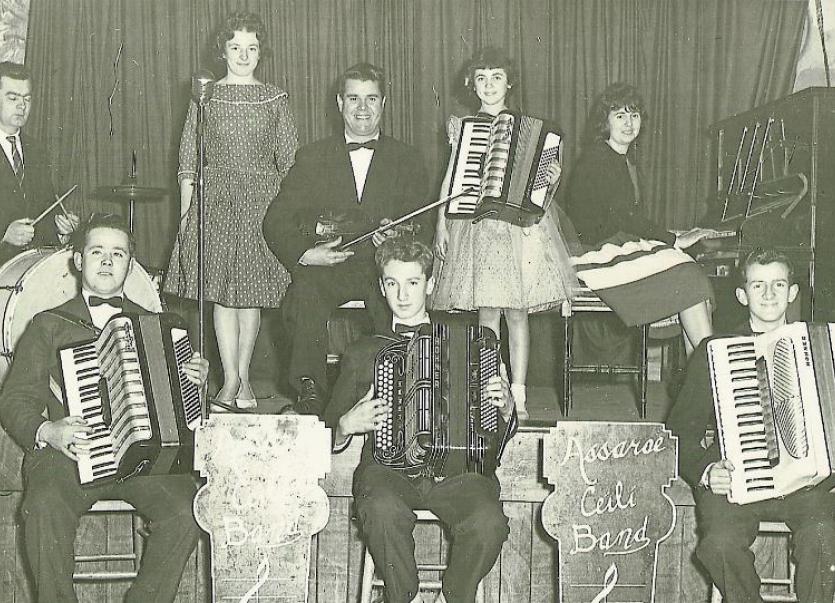 About twelve years ago the late Cyril Curran, who passsed away recently in Corby, England, kindly recalled some of his memories of growing up in the town and how the Assaroe Céilí Band achieved national fame, when I interviewed him for a book I was researching, on the history of Ballyshannon, a history of which he was a special part. Cyril Curran was a proud native of Ballyshannon and never forgot his roots.
He was instrumental in forming the Assaroe Céilí Band who were a household name in music circles not alone in Ireland but throughout Great Britain in their day.

Cyril recalled his early years in Ballyshannon and a most novel way of ensuring punctual attendance, at the Brothers School on the Rock. The Brothers gave a free day from school work to the first pupil to arrive at the school gate. Cyril was early on the ball and won this award several times, although he is not too sure how it affected his spelling in later life!
He believed that although the school wasn’t open on his arrival, the Brothers might have had binoculars and could have viewed the winner from their attic in College Street. Cyril has recollections of his youthful days in Ballyshannon. The monthly Fair Day took place on the street and around the Fair Green where the middle man would buy and sell for someone else. 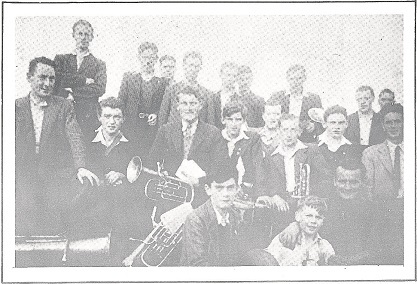 The final price was always decided by the buyer, who would spit on his hand and slap the hand if the animal was sold. If the deal was done both would go to the pub and if not they would walk off in different directions. Ballyshannon, he recalled, had several Catholic priests including: Father Herbie Bromley, Fr. Gerard Daly, West Rock, Fr. Des O’Donnell, Market Street, Fr. Hugo Dolan a son of Guard Dolan Main Street, Fr. Daly the Mall long passed on, Father Vincent Gallogley, Fr. Rocks, Fr. Benny O’Gorman, Fr. Ambrose O’Gorman and Fr. Tiernan Castle Street. Bob Devitt he remembered as a traveller who slept out and always carried a sack on his back and was always teased by the children. 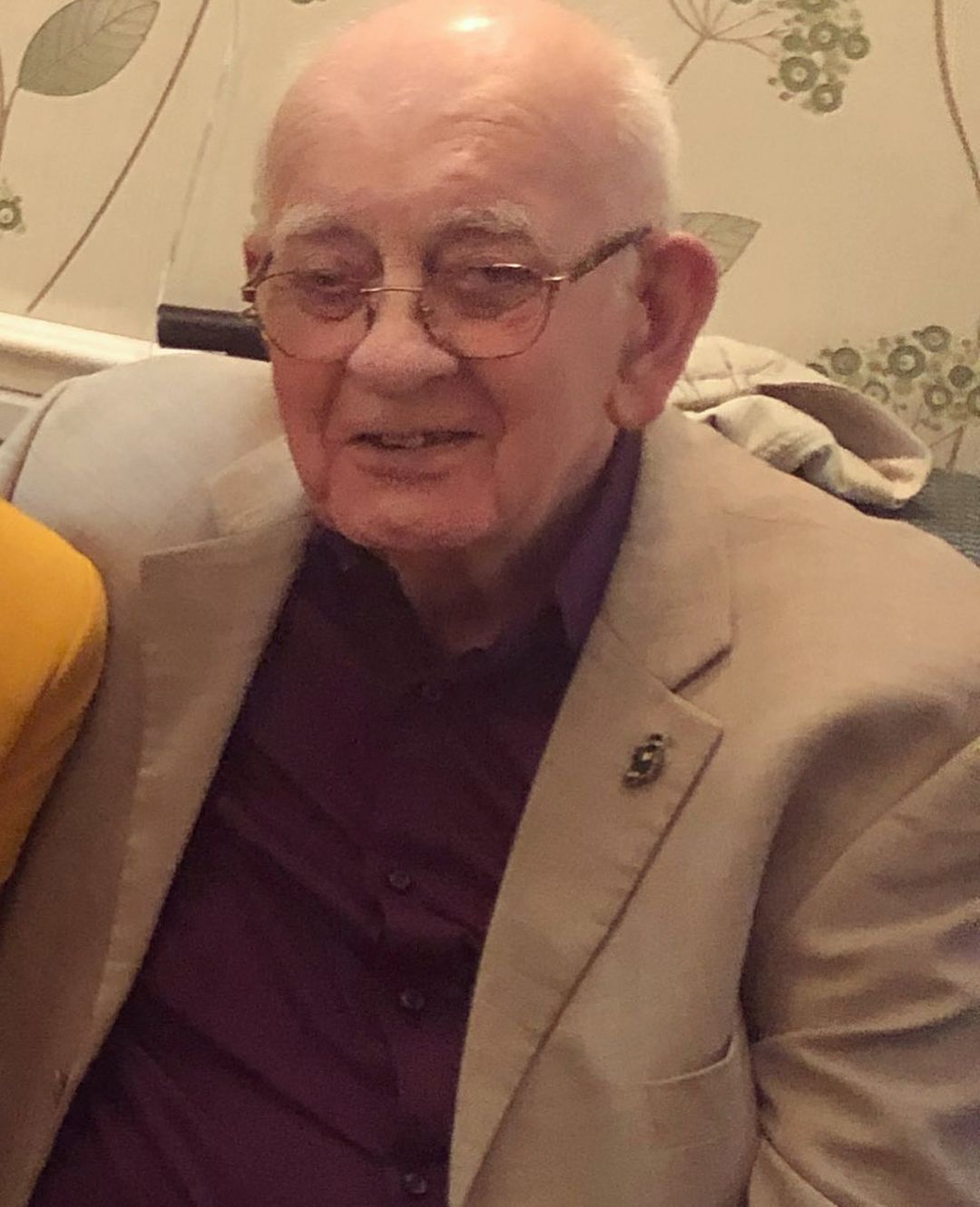 He would chase them and scold and preach to them. Mr. Nyhan was a retired school master who would throw fistfuls of money to the children in the street. Whitebread was another traveller who just wandered about with a sack on his back and was a regular visitor to the town. Kevin Lapsley he remembered as a great singer who was known as the “Bing Crosby of Ballyshannon”.
One of the great memories of Ballyshannon people of his era was the plane crash on the 19th June 1945 of a Liberator plane in the Abbeylands. He remembered visiting the crash scene out the Rossnowlagh Road not too far from Abbey Assaroe.

The Assaroe Céilí Band
The Assaroe Céilí Band was a huge part of the music scene in Ballyshannon and surrounding areas. They also were the first local music group to tour all over Ireland and Great Britain.
The founder of the Ballyshannon based band was Cyril whose parents owned a sweet shop in the Diamond area of the town. Cyril recalled how he was introduced to the music scene which led on to the successful Assaroe Céilí Band.
In 1947 he was a regular attender at a boys’ club on the Mall, where a family called Mc Gonigle had previously lived. The house was located at the top of an avenue just past the old Ballyshannon Bakery. John Fitzgerald, a Custom’s officer, started the boys’ club and organized activities. Fitzgerald had a great tenor voice and sang at local concerts. Most nights Cyril and other lads from the town gathered at the club where they sang, listened to music and went on hiking activities.
As a result of this experience Cyril and a few others decided to form a band. This was the era of Cementation and the ES.B. with quite a few musicians around. Musicians who played locally with him included, Jackie Flynn, Francis Fannon and Mickie Gallagher who was the drummer for a number of years. On one occasion, he performed with a 15 piece band in the 98 Hall, Maureen and Lily Slevin made up part of the Band on that occasion.
In 1952, Cyril started to be more ambitious and advertised in “The Irish Independent” and travelled to venues around the country. In the summer of 1954 he was approached by a promoter named Phil Solomon, who invited the Assaroe to tour as back-up band to the great Jimmy Shand Scottish Band. At that time Jimmy Shand was a huge star and this was a major breakthrough for the Ballyshannon based band. The 1954 tour took the Assaroe from Cork to Donegal and places in between.
Their fee for the entire tour was £325 and they came home with a few pounds in the pocket and the rest is history. The Assaroe were big news after that and toured extensively in Ireland, England, Scotland and Wales. Cross- channel tours were a regular feature with up to three tours a year.
On occasions the band travelled to England for a few special dates and Cyril recalled on one occasion, flying over for one special date to a concert in The Belgrave Theatre in Coventry.
The Assaroe were popular on R.T.E. radio and featured regularly with three live broadcasts each year on “Céilí House” plus numerous broadcasts on “Take the Floor” with Din Joe and even broadcast from the Rock Hall. Many local musicians played with the Assaroe Céilí Band and Cyril recalled the names of some people who performed with him over the years: Breege Curran Kelly, Eileen Curran Kane, Mickie Gillespie, Francis Fannon, Jackie Flynn, Mickie Gallagher, John Tierney, Larry Hoy, Charlie Lennon, Seamus Sweeney, Patricia Sweeney McGroary, Kevin Loughlin, Peggy Kelly, Charlie McGettigan, Neil McBride, Cathal Flynn, Noel Scott, Tom Gallagher and Vincent McGurn, Corlea.

Charlie McGettigan’s memories
Charlie McGettigan who went on to win the Eurovision Song Contest with Paul Harrington credits Cyril Curran as a major influence on his musical career. Charlie’s father Pat McGettigan had a grocery shop on Main Street, just around the corner from where Cyril’s parents had their shop.
He recalled that the Rock Hall played a major part in his early years, as he was mesmerised by Cyril Curran, The Assaroe Ceilí Band and local artistes like Michael Gillespie and those consummate professionals Maureen Kane and Lily Heresy, who had the audience in stitches as they played, sang and performed sketches with a local flavour. Mary Mc Gonigle, a glamorous singer with the Assaroe, John Tierney, a shoemaker from College Street and the full Assaroe Band, Charlie recognised as a most professional outfit, who had music stands, their name on a van and went on tours of England and Scotland. The thrill of Charlie McGettigan’s short music career, at the time, was when Cyril Curran invited him to play with the Assaroe Ceilí Band at a dance in Rossinver.
The regular guitar player was unavailable and Charlie recalls his excitement at hitting the big time! He would have played for nothing but he remembers Cyril Curran meeting him, sometime later, and giving him ten shillings.

Adieu to Cyril
The Assaroe Céilí Band always promoted Ballyshannon, displaying a photograph of the Assaroe Falls at their dances. Cyril chose the Assaroe as the name for the band because he grew up close to where the Assaroe Falls once created a musical sound of their own. Cyril Curran was very much a Ballyshannon man who never forgot his roots by the Erne and was a regular visitor to the town. His memory will always be cherished in his native Ballyshannon.
Sincere sympathy to his wife Maureen and family in Corby England and to all the Curran and extended family. May he rest in peace.

Adieu to Belashanny!
Where I was bred and born;
Go where I may, I'll think of you,
as sure as night and morn.
The kindly spot, the friendly town,
where every one is known,
And not a face in all the place
but partly seems my own;
There's not a house or window,
there's not a field or hill,
But, east or west, in foreign lands,
I'll recollect them still.
I leave my warm heart with you,
tho' my back I'm forced to turn—
Adieu to Belashanny,
and the winding banks of Erne!

SPECIAL FEATURE: There will always only ever be one 'Baker' 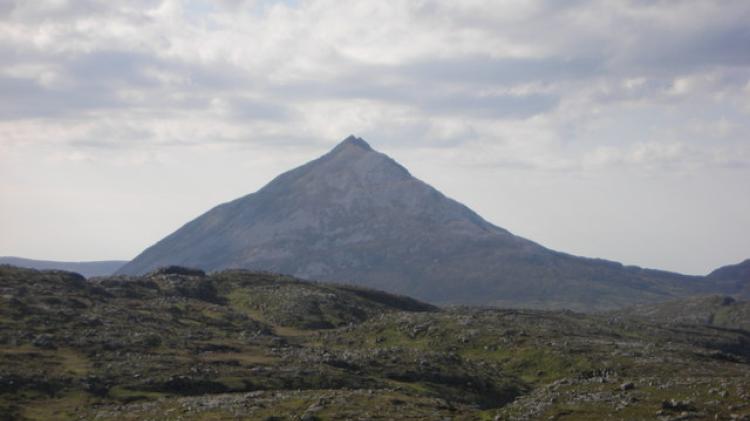