Letterkenny man has raised close to $1m for sight-saving charity 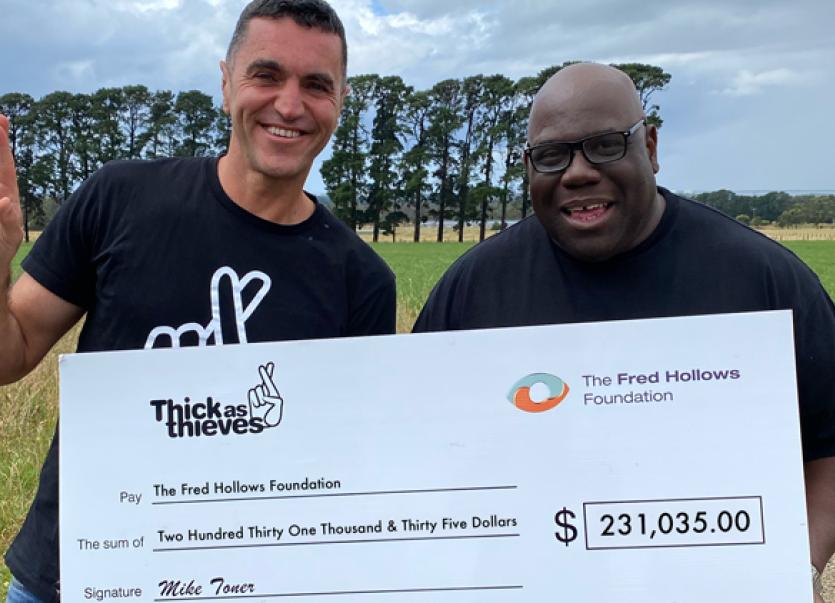 A Letterkenny man has been the driving force behind a recent charity run in Australia that resulted in over $200,000 being raised for the Fred Hollows Foundation.
It's just the latest charity event that Mike Toner has been involved in, and in total, his efforts have helped raise almost $1m.

Read also: Parishioners left disappointed as Christmas Mass tickets snapped up
The Fred Hollows Foundation is a charity that can restore eyesight to people blinded by cataracts disease for $25. Mike started fundraising for the worthy cause in 2011.
Originally from the Middle Road, Ballyraine in Letterkenny, Mike is the son of Margaret Toner and the late Mickey Toner. His father was one of the founding members of the Swilly Seals swimming club. Mike attended St Colmcille’s National school and St Eunan’s College before moving to live in Melbourne in 2003.

Read also: Donegal recipient in national Pride of Place Awards 2020
In 2009, he set up his company Thick as Thieves - a dance music touring and events company.
Mike said: “I bring big international DJs to Australia, set up tours for them and we run dance music events and festivals in Melbourne.”
During the first few years, Mike got the DJs to play for free to raise money for the foundation. In 2015, Mike took part in an Ironman Triathalon and he raised funds from that event.
“In 2017, a couple of friends asked if we should do an endurance event together so we got a team of four and did an event called Coastrek.
“We entered a Thick as Thieves team and raised money. Then in 2018, we had two teams of 4 doing the same event and raised more money. Each person running committed to raising $1,000 minimum, each,” Mike said.

Read also: Weather: Outbreaks of rain and strong winds
In 2020, Mike posted on his social media that he was entering a Thick as Thieves team for the event and had 140 people from the dance music industry from across Australia request to join with each committed to raising $1,000. Unfortunately, the event was cancelled due to the pandemic.
However, Mike was not to be defeated. He had been helping to train a group of participants from the music industry all year and all were committed to raising the money.
Because of that, he didn’t want to let the opportunity go, so he approached his local council and began organising a marathon event, which became known as “Quick as Thieves".
He got the world’s no.1 DJ Carl Cox, on board as an ambassador. The DJ had himself undergone cataract surgery earlier this year. His coming on board vastly helped generate publicity for the event which eventually went ahead on December 4 and raised $235,000.

Read also: Buy your very own former train station and waiting room
Mike has almost raised $1m for the foundation since he began fundraising. The good-hearted Letterkenny man also raised $50,000 for those effected by the bushfires in Melbourne.