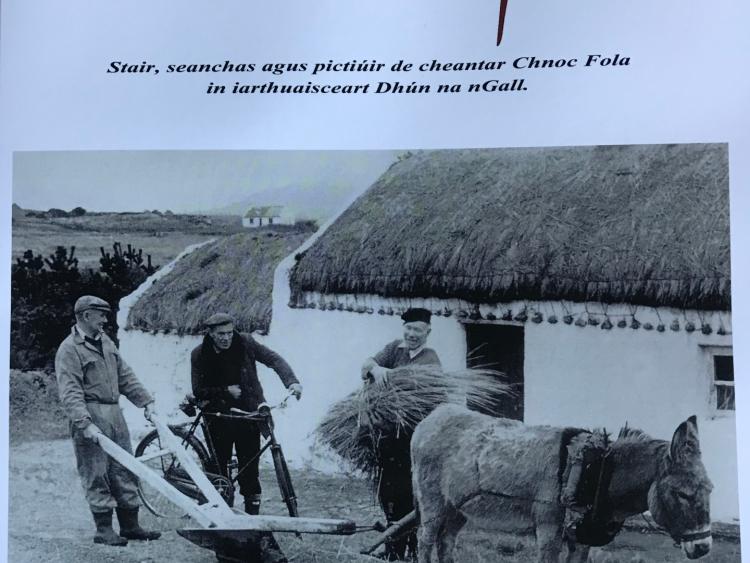 An obituary notice of a Donegal fisherman which described Concubhar Mac Pháidín’s heroic actions in rescuing shipwrecked sailors during the war appeared as a post on a social media site recently.
The post featured on Séimidh Ó Dubhthaigh’s Facebook page which proves to be an excellent source of knowledge for historians.The obituary was sent to Séimidh by Pádraig Ó hOireachtaigh and was sourced from the Irish Newspaper Archives, in Dublin.
The obituary which featured in the Belfast Telegraph on September 12, 1938, states: “Mr Cornelius Mc Fadden known locally as ‘Croher Mhor’ who has died at the age of 90 years, was a native of Innisherrir Island, West Donegal. He was one of the best known seamen along the County Donegal coast, and risked his life on several occasions to rescue shipwrecked sailors during the war. He saved the crew of the Bonniface, which foundered off the island and took them to his home and in 1884 recovered, floating on a raft, four bodies of the crew of the ill-fated Wasp, which foundered off the coast of Tory Island.”
The piece continues to describe Concubhar mór as a man of ‘magnificent physique’ who went to the Scottish harvest annually and was known as the champion ‘shearer’ of corn in north west Donegal.
Generations have stemmed from the late Concubhar mór Mac Pháidín. Some of his great grandchildren and great, great grandchildren live locally alongside other relations.
A book which was penned by Bríd Mhic Pháidín in 2014, 'Faoi Scáth Chnoc Fola also describes events in the life of Concubhar mór. The book which contains over 800 photographs, which span over the course of a century, contains the photograph featured on the right, of Concubhar mór. In the historical work, Bríd describes the efforts that Concubhar went to on a weekly basis to go to Mass at Derrybeg Chapel.
Written in Irish, the book outlines Concubhar coming in from the island which lies a short distance from the coast of Gaoth Dobhair, on a weekly basis. He stored his good shoes and clothes under a rock on the beach. He would put his good clothes on before going to Mass and change his clothes before he made his way back to the island.
On another occasion, Bríd outlines in her book, how Concubhar was on a boat with other men when a storm began to brew. Within a short of time, the storm was bellowing across the waves. Concubhar took his Rosary beads out and the men began to pray. As they came to the end of the Rosary the storm had not abated. Concubhar suggested they ought to start on a second Rosary. However, his son, Paddy, being hungry suggested they have tea first.
Concubhar was not the happiest with the suggestion and said that some people were more concerned about their stomach above anything else.
Quick as a whip, Paddy replied that if he was going before God that night, he would rather go before him on a full stomach.