Exciting times for the staff and pupils at Gairmscoil Mhic Diarmada, Arranmore Island 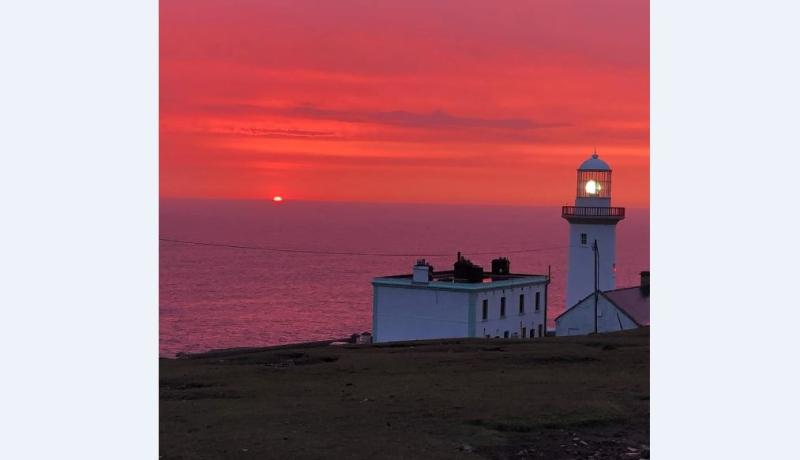 The involvement of Gairmscoil Mhic Diarmada, Arranmore Island in the Erasmus+ Programme 2020-22 is likely to keep the school’s teachers and students busy when classes resume over the coming weeks.
The school first became involved in the project after a visit by the school principal to Cherbourg, France, during the midterm break (October 2019).
This visit was organised by Mr Julien Bougon, Director of the Tourist Office in Cherbourg in conjunction with the Alliance Francaise in Dublin.
The Principal, Mrs Mary Doherty, was selected along with four other French teachers from schools across Ireland to participate in this visit to Cherbourg-en Cotentin France.
This all expenses paid trip was a delight and involved visits to the best known sites in the region e.g. Cité de la Mer, Art Galleries and Theatres in the City.
The visit included a tour of the various World War 2 Museums in the area including a trip to St. Mère de L’église and to Tatihou Island (L'île de Tatihou). This trip to the small French island was particularly interesting as it allowed comparisons to be made between Arranmore Island and this small Island off the coast of Cherbourg.

A meeting with local teachers was also organised in Cherbourg and the Erasmus+ Programme was mentioned at this meeting. It was clear that the French schools were looking for an Irish partner school and the Irish teachers present were all interested in being that partner school and had to await a decision which came later.
A number of weeks passed after their return to Ireland and early in January 2020, Mr Julian Bougon contacted Mrs Mary Doherty with a view to the possible involvement of the school in the Erasmus Project which focused very much on the protection and preservation of the Marine Environment.
He proceeded to put her in touch with Madame Pascale Le Franke, Principal of Collége Cachin in Cherbourg whose school was to lead up on the project.

Partner schools
At this stage Mme Le Franke had successfully procured other partner schools both locally and internationally to take part and the writing of the project began in earnest during February 2020.
There are three Cherbourgeois partner schools involved in the project (Collége Cachin, Le Lycée Maritime, Le Lycée Agricole) together with partner schools located in Reus (Spain) and Mendicino (South Italy) as well as the Irish partner school on Arranmore Island.
This project was approved by the Erasmus+ Agency in August 2020.
The project is of two years duration (2020-2022) and is funded by the National Erasmus+ Agency in each country. €28,274.00 has been allocated to Gairmscoil Mhic Diarmada for their participation in the project. This budget will be used to cover management, travel, accommodation, subsistence and exceptional costs associated with the project.
This very generous budget is being managed by the Arranmore School in conjunction with the Erasmus+ Agency based in Dublin and in association with Co. Donegal ETB.
The aims/objectives of the project include an awareness by young people of their local marine heritages, to provide them with a sense of European belonging and to provide them with the knowledge, skills and tools in order for them to take part in European debates. They will be enabled to become actionary citizens and will be expected to communicate with wider audiences regarding the processes and outcomes of their project.
Publicity surrounding the various aspects of the project will be key to its impact and success and the school plans to publicise it widely on its various social media platforms as well as raising awareness of the project.
The project will involve Teachers from the following school disciplines: Science, Geography, Maths, History, Art, CSPE and Languages Departments.
The target groups for the project are the current second year and third year class groups (26 students) who will take part in a wide variety of activities and initiatives prior to student mobilities which it is hoped will take place in 2022.
Student mobilities will see one of the French groups visiting Arranmore during March 2022.
Students from the six participating schools will then meet in Cherbourg during May 2022 to get actively involved in Environmental Protection, to present their projects and to visit tourist sites locally.
Gairmscoil Mhic Diarmada wishes to acknowledge the support of all school staff, parents, Co. Donegal ETB and the Erasmus Agency (Léargas) in Dublin as well as the support and resources received to date by their European Partner Schools.