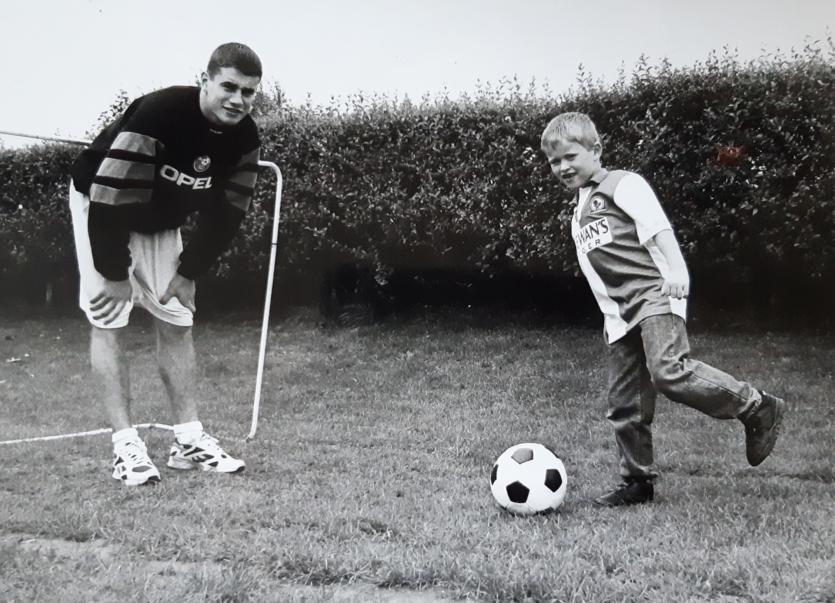 Shay Given kicking football in the garden with his younger brother Paul who was in the colours of Shay's club at the time, Blackburn Rovers

Participants in a unique online community project shared in a fascinating trip down a sporting memory lane on Thursday night.

Former international goalkeepers Packie Bonner and Shay Given were special guests on an online debate where their memories of Donegal, and their love for home came across as strong as ever.

The event was part of a project organised by Donegal Sports Partnership, supported by the EU through Donegal County Council’s Peace 4 Action Plan.

It was initially set up to develop a practical social soccer / walking football initiative in both Raphoe and Falcarragh working with Raphoe Town FC and Ionad Naomh Fionnán.

However, plans had to be revised as a result of Covid-19 and the Level 5 restrictions. Instead, over the last number of weeks, Donegal Sports Partnership has been delivering online weekly sessions with the groups, under the stewardship of local journalists Diarmaid Doherty and Ciaran O'Donnell.

These sessions have also been supported by other external speakers who have come on to share their life experiences.

Thursday night’s session, which involved over 50 participants from the Raphoe and Falcarragh communities, was undoubtedly the highlight of the project. 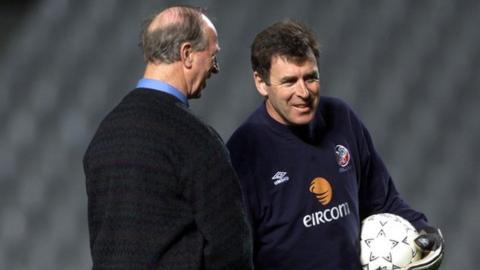 Packie and Shay’s rise to footballing fame has been well documented over the years. However,  to sit and listen to the two men talk with such passion and feeling about those who helped them on that journey, the trials and troubles they had to overcome, and how they dealt with the success that came their way, was quite simply, a wonderful experience.

Packie is based in Glasgow, Shay now lives in Manchester - but Donegal is still home. And that was evident as they happily talked about their careers, and participated in a question and answer session with the lucky participants.

And it was a special night too for Kacey Blackburn, the Raphoe Town FC player who will travel to Turkey this week for surgery. The teenager has been diagnosed with  idiopathic scoliosis and a fundraising campaign to help pay for her treatment had raised almost €40,000 last weekend.

Kacey was one of the participants on the night and before the presentation got underway, both Packie and Shay offered their own words of support and encouragement to the young Raphoe woman ahead of her life-changing surgery.

It was a great start to an event that lasted almost two hours, but quite literally, flew by.

Packie presented a brilliant slideshow which featured photographs from down through years, not just from his time at Celtic, but from his home in Burtonport.

He also showed photographs of Keadue Rovers and Rosses Community School teams on which he played. He name-checked players from those teams, and spoke of the friendships they had enjoyed, and the part his coaches had in his development as a young footballer.

He also talked about his love for Gaelic Games and recalled his few appearances for Donegal before he eventually made his move to Celtic.

Packie also spoke with pride on his career at international level - his appearances at European Championships and World Cups - and the highs and lows of those tournaments.

His admiration for Jack Charlton was also captured - Packie saying that Jack had an amazing warmth and ability to engage with anyone he met.

Shay, who is now head coach at Derby County, took time out from his team’s preparations for their league game on Good Friday, to partake in the discussion.

He revealed how he lives close to Derby’s manager, Wayne Rooney, and the two of them travel in and out to work together each day.

Memories of his younger days back in Lifford are still as fresh as ever and Shay spoke with passion about his childhood and how he and his family had to cope with the loss of his mother who died when he was just a young boy.

His breakthrough came when he played with Lifford Celtic as a 15-year-old and the team went all the way to the semi-finals of the FAI Junior Cup. Manchester United wanted to sign him, but he chose Celtic.

Shay then went on to recall the early days in the professional game - working with Packie at Celtic; moving to Blackburn Rovers where he was signed by Kenny Dalglish; his time out on loan at Sunderland when he got his first call-up to the Republic of Ireland under Mick McCarthy.

He would go on to play for Newcastle United, Man City, Aston Villa and other clubs too, and at international level, only Robbie Keane has more caps than Given.

Packie and Shay’s best saves, career highlights, best team-mates, most influential managers and even thoughts on VAR were all discussed as the online participants put their own questions to the special guests.

It was a special evening - and great credit must go to Myles Sweeney and his brilliant team at Donegal Sports Partnership for organising the event.

As Myles said himself, the county is lucky to have two legends of the game in Packie and Shay, to call our own.