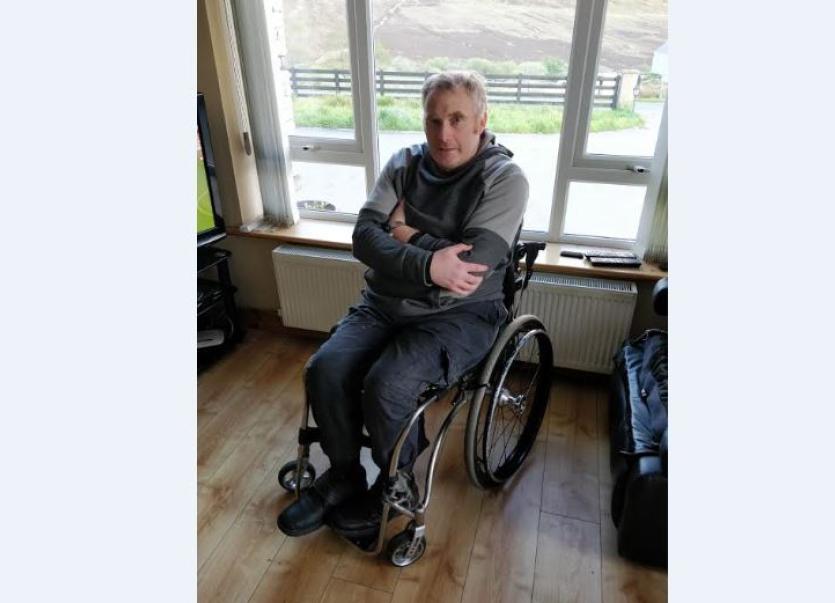 Great support: Charlie McDaid’s quality of life has dramatically improved over the past six years, thanks in part to No Barriers

Six years ago Charlie McDaid was experiencing severe difficulties as a result of being a long term wheelchair user.
It was causing chronic problems for his body when a phone call from a friend alerted him to the existence of the No Barriers Foundation, a health facility equipped with specialist neurological equipment.
The service has transformed his life and Charlie was recently appointed as the first service user representative on the No Barriers Foundation’s Board of Directors.
No Barriers will be one of the charities benefitting from this year’s North West 10k and Charlie is encouraging as many people as possible to enter for the charity run and walk which takes place virtually on Monday, June 7.
The Buncrana man’s quality of life has dramatically improved over the past six years with his physical health at a level now that he doesn’t have to suffer the discomforts that were making his life such a misery.
It was 21 years ago when suffered catastrophic injuries in a car accident just a mile from his home in the Illies near Buncrana.
The damage done to his spinal cord was so extensive that the diagnosis was that he would not walk again. Charlie was just 20 years of age living life to full working with a local construction company and boxing with the well known Illies amateur club.
“I remember nearly everything about the accident,” he recalls.
“ I was taken to Altenegelvin Hospital in Derry first and then I was flown by helicopter to the Mater in Dublin.
“I was there three weeks and was told that the injuries meant I wasn’t going to have the power of my legs again,” added Charlie who was remarkably positive about such a life changing diagnosis at the time.
He was later transferred to the National Rehabilitation Unit in Dun Laoghaire for a nine-month period. “I was well looked after in Dun Laoghaire. It was a whole new way of life but I was determined to do the rehab as best I could. 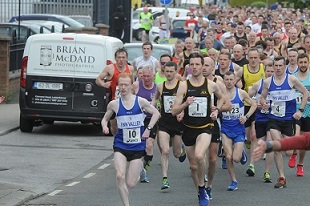 The leading group at a recent North West 10k. This year's charity race will be held virtually on Bank Holiday Monday, June 7

“I met so many people there with different situations. I was able to see people progress that were ahead of me in the rehab.
“Then I got to the stage where I was able to go home for weekends to see how it would go. Then I got home for good. From the start I had great support from family and friends which has been a big help” Charlie said.
Nevertheless there was an enormous change to life back home in the Illies. Ten months previously Charlie had been out on construction sites, now he had to find an alternative career pathway. And he had a plan in his head to do just that.
“I left school at 15 and got a job with a local contractor and was doing shuttering on the building sites,” he said.
“So one thing I wanted to do was to go back to education.”

Course
Charlie enrolled for a degree course in Construction and Fire Safety at Letterkenny IT. He graduated in 2008 but it was at the worst time as his qualifications were aimed at finding a job in the construction industry which had just crashed.
“It was just bad luck because the recession had hit and there was no work in that area” Charlie said.
It would be eight years before a work opportunity in that sector came along through HML, a local construction and plant hire company. They do business locally and also in the Dublin area.
Charlie has significant responsibilities including pricing jobs to keeping the work contracts coming in for HML.
However, it was around the same time in 2015 that 14 years in a wheelchair was taking a serious toll on his body.
“Sitting in a wheelchair so much meant I was getting sores that weren’t going away.
“A friend told me about seeing something about No Barriers on Facebook. So I had a look and got in contact with them. They took me on and it’s been great.
“The exercises helped the wounds to heal and I don’t really have that problem now. It has helped my whole body like the kidneys to work better.”
Equipment like the exoskeleton suit has led to an unbelievable improvement in Charlie’s physical fitness. The specialist suit enables people with limited mobility to stand up, walk and rehabilitate.
And pre-Covid, Charlie was also full of praise for the social interaction through the regular Thursday classes. “It was great to meet six or seven people at the classes.
“The exoskeleton has been great for getting me up and walking. It’s is so important to have that equipment in Letterkenny and not to have to go away to Dublin.
“The No Barriers Foundation is a great service and I would just like to encourage people now to support us by entering for the North West 10k” Charlie said. 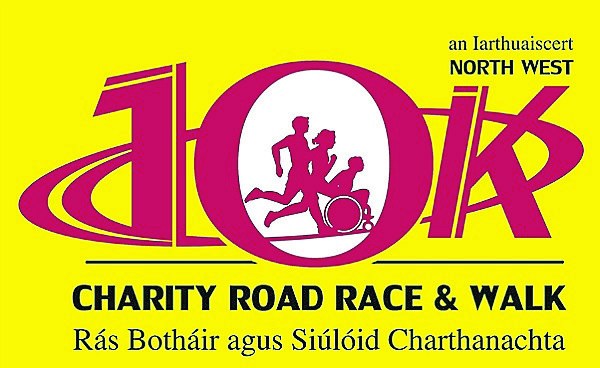 And his involvement with the No Barriers Foundation as a service user has now extended to a brand new role as a member of the Board of Directors.
Charlie is the first service user to be appointed to the board. It’s something that No Barriers head physio Johnny Loughrey sees as important to have the input of a person who has experienced first hand the service that is being provided.
It’s an invitation that Charlie didn’t expect: “I didn’t expect to be asked and it’s all new to me.
“It only happened last month and there hasn’t been a meeting yet. But, they want to have someone on the board that can maybe make suggestions for changes to improve the service more.”
The 41-year-old lives independently in his own house but close to family members in the Illies.
And he’s also independent when it comes to transport having acquired an adapted car just a year after the accident.
Johnny Loughrey is delighted with the progress that Charlie has made.
“It’s been great for Charlie physically and mentally,” Johnny said.
“The strength and conditioning classes have made a big difference for him.
“But also mentally and emotionally he has built a strong bond with other service users and there is a nice community here.
“We saw leadership qualities in Charlie and that’s why we have invited him on to the Board of Directors. 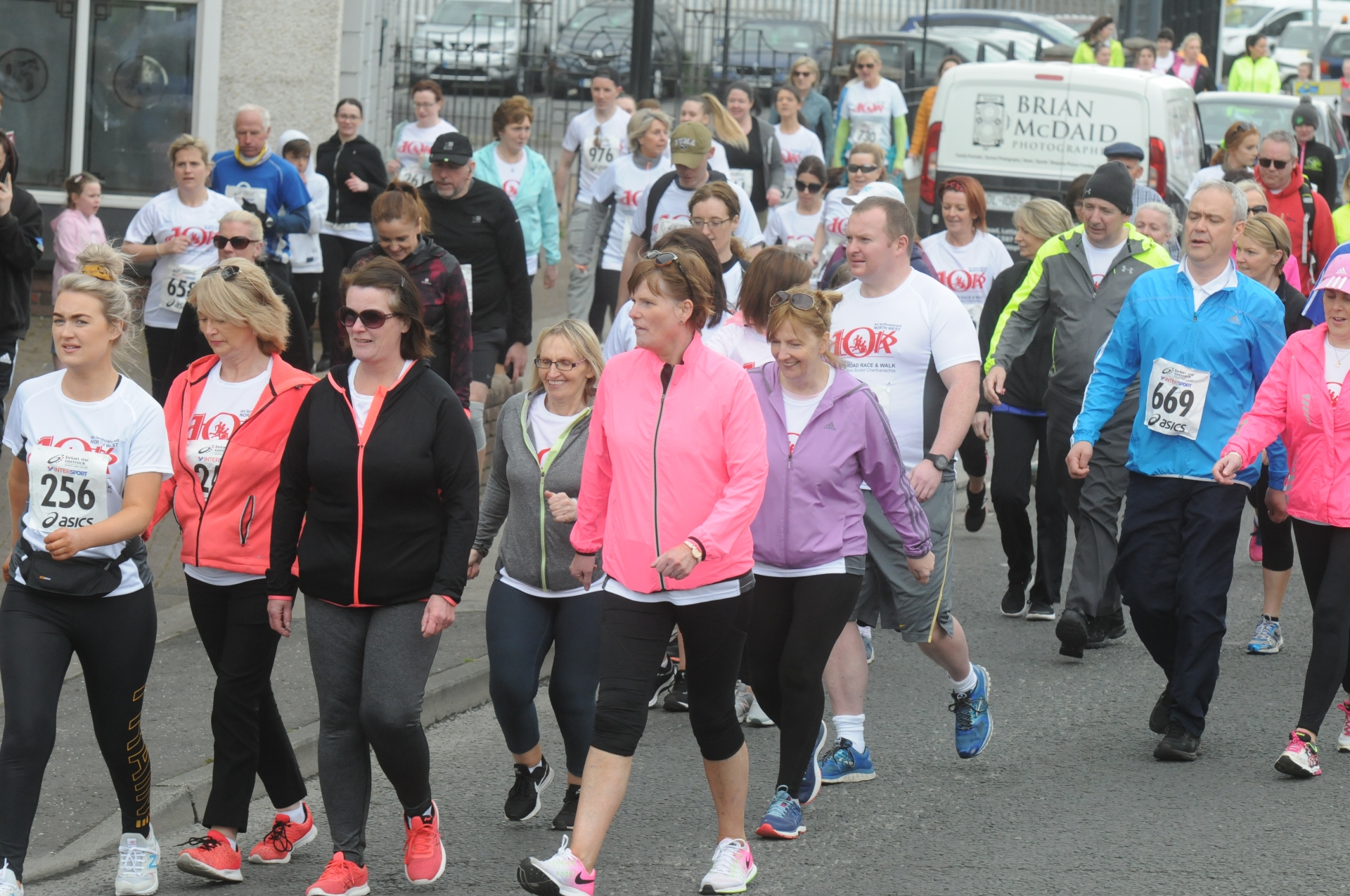 Walkers stepping it out at a North West 10k in Letterkenny

“We want the service users to have a say on how we can improve and that’s something we are aiming to do all the time.
“Hopefully, Charlie will bring back suggestions from other users that the Board can look at and change or add things to enhance the service.”

No Barriers
No Barriers is a non-profit organisation that breaks down barriers to exercise and physical activity.
They help anyone with a disability to get fitter and stronger improving both their physical and mental health.
No Barriers has an inclusive centre in Letterkenny for allowing both one to one and group exercise sessions.
No Barriers also has the only Ekso Bionics exoskeleton suit in the North West. The specialist suit enables people with limited mobility to stand up, walk and rehabilitate in a way that was never possible before this technology. There are just six exoskeletons in Ireland.
The organisation is reliant on donations and fundraising to meet the €120,000 annual cost of running the service.

North West 10k
Entries are now being taken for the 24th North West 10k which will be held virtually for the first time on Bank Holiday Monday, June 7.
Runners and walkers can enter at https://www.njuko.net/
nw10k2021.
The other charity who will benefit this year is the Donegal Diabetes Parents Support Group.
North West 10k Chairperson Neil Martin is asking all those who have supported the charity event over the past 23 years to enter again. And he wants to see lots more men, women and families becoming part of the run and walk for the first time in aid of two very worthy charities.
“It’s fantastic to see the great work that the No Barriers Foundation has been doing for so many people including Charlie McDaid,” he said.
“ It’s a great news story and you can see the difference that it has made to Charlie’s life.”