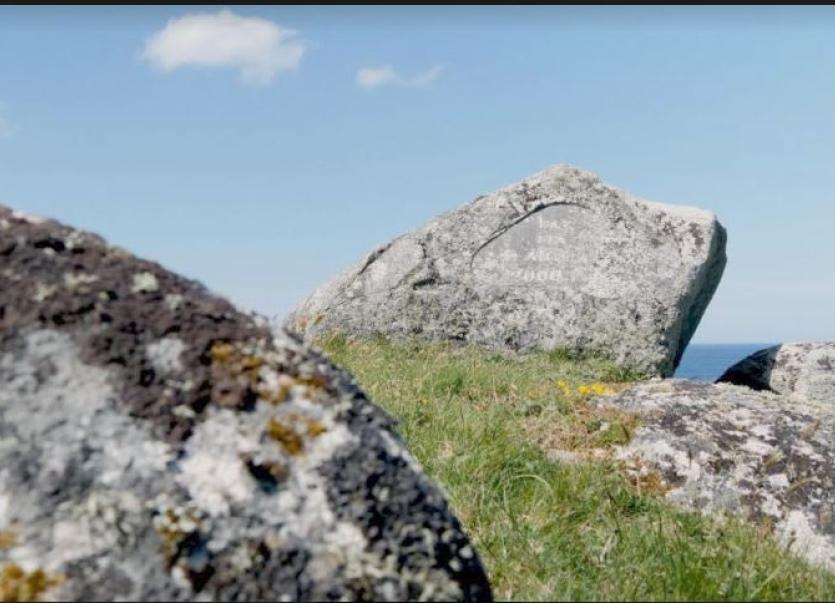 Gaoth Dobhair featured in a very special campaign which invited priests in each of the 26 dioceses of Ireland, to celebrate the Most Holy Sacrament of the Eucharist, at a Mass Rock located in their Diocese.
Following the Easter Octave this year, Aid to the Church in Need (ACN) Ireland launched the campaign.

Father Shane Gallagher
Mass was said at the Gaoth Dobhair Mass Rock on Sunday, May 30 by Father Shane Gallagher.
Priests in each of the 26 dioceses returned to these secluded and sacred places of historical worship where once countless Irish Martyrs and their companions risked their lives to receive and celebrate the Most Holy Eucharist.

Between 1534 -1714, millions of ordinary Irish men, women and children living in difficult times such as poverty, famine and enduring many horrific hardships as a result of anti-Catholic persecution, under the penal laws.The settings for the Mass Rocks were wide and varied and yet all stunningly and uniquely beautiful; whether it be in a furry glen, on a bare rugged coastline, on a still, serene mountaintop, in a grassy green field covered in fresh dew or under a canopy of pine trees, with the soothing sounds of a gentle stream nearby… each Mass Rock had one thing in common, it was found in a sacred wilderness and in a place of great serenity and closeness to God.

Reflection
Monsignor Tommy Johnston reflects on his experience having celebrated one of the 26 Mass Rock Masses, organised by ACN Ireland, on Mass Hill, a very picturesque area in the Ox Mountains in the parish of Tubbercurry, the diocese of Achonry:
“The Mass Rock there is a huge boulder with an uneven surface offering no indication that it could possibly be used for such a sacred purpose, perhaps that is why it was chosen.
“It did not warrant a second glance. It was above suspicion. Its location nestled on the hillside provided a clear commanding view of the surrounding area, so, lookouts, at the first hints of danger could easily alert those gathered for Mass.
“It was a unique privilege to stand at a place made sacred by our ancestors who had stood there all those years ago giving voice to their faith in presence and prayer conscious of the ever-present danger to life and livelihood.”

ACN Ireland would like to express their most sincere and heartfelt gratitude to all the priests who participated in the Holy Sacrament of the Mass at one of the 26 Mass Rocks: the places where Eternal Life was offered for those who regularly risked their temporal life to receive Jesus.
Aid to the Church in Need (ACN) Ireland supports persecuted Christians in 149 countries around the globe and is Ireland’s leading Catholic charity for protecting the rights of Christians.
ACN say more than two-hundred million Christians face extreme persecution for their faith.
As a Catholic charity, ACN Ireland support the faithful wherever they are persecuted, oppressed or in need.

Each year ACN fund more than 5,000 projects in over 140 countries around world, helping to support the Church in its mission, and bringing hope and solidarity to millions of people.
For more information about ACN, please go to www.acnireland.org.