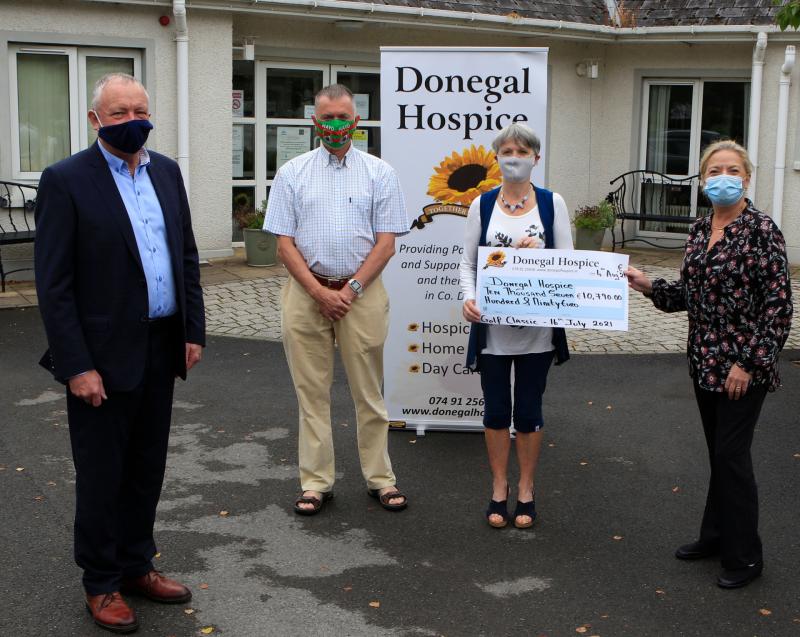 Lucy McGettigan (right), Nursing Manager at the Donegal Hospice, receives a cheque for over €10,000 from the organisers of the charity golf classic PICTURE: BRIAN MCDAID

A cheque for over €10,000 has been presented to Donegal Hospice by Letterkenny Golf Club.

The funds were raised in a charity Golf Classic which was held in July at Barnhill.
The charity golf day was organised in memory of all of the golfing fraternity who have passed away and in recognition of the great work of the staff at the Donegal Hospice.

The cheque was presented this week by event organisers Henry McCahey, Michael Shiel and Angela Kilgallen.
Henry said they were overwhelmed by the support received.
“It was just fantastic,” he said.
“We were so well supported, not just by our club members, but by the people of the town as well. They were all so generous.

"In normal times, we would have organised other events too, like a charity coffee morning. But that just wasn't possible this time, so we decided on a golf classic.
“It was our way of celebrating the memories of those who have passed away and to say to families out there that you are not alone.
“We all appreciate the great work that the hospice staff do here in the north west  Thankfully the weather was great on the day, and those who took part were blessed with fantastic weather."