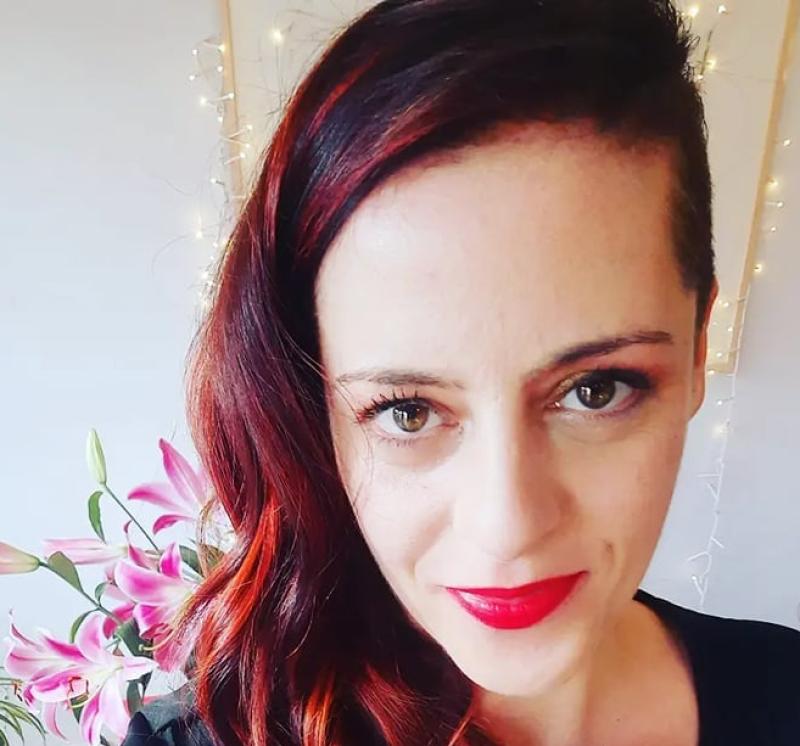 The Gallery Press will publish a new poetry collection by award-winning poet Annemarie Ní Churreáin who is originally from Doire Chonaire today, November 4.
Weaving together Irish history, autobiography and mythological stories, this new collection is titled ‘The Poison Glen’ and it explores the theme of the stolen or missing child.
“The Poison Glen in the Donegal Gaeltacht is part of the landscape in which I grew up. It’s an auspicious site in Irish mythology associated with Balor of The Evil Eye, who locked his daughter Eithne into a tower on Tory Island and stole her three infant sons, drowning two of them. It is said that Lugh, the God of Light, was the surviving son who returns from his fosterage as an adult to slay Balor by striking him in the eye and causing a poison to spill all through the glen. So, it’s a battle of light over darkness. At heart it’s a family tale of loss and grief.”

Award winning poet
Ní Churreáin, is a recipient of a Next Generation Artists Award from President Michael D. Higgins on behalf of the Arts Council and co-recipient of The Constance Markievicz Award. She has received literary fellowships from USA, Germany and Scotland and was Writer-in-Residence at NUI, Maynooth, and Centre Culturel Irlandais in Paris. The Yale Review has surmised that “Ní Churreáin often captures a whole world of cultural and historical implications in a single, simple, but metaphorically rich image.”
The Los Angeles Review of Books states “that Ní Churreáin can condense the prototypical life of a young Irish woman into half a page while sustaining the poem’s impact is testament to her ability as a storyteller, the vividness of her language, and the universality of the portraits she is painting...”. An Irish Times review has reported that Ní Churreáin’s poems “with their musicality and sensuousness, as well as their fearlessness, mark the welcome appearance of a fresh and vivid new voice”.
In poems both tender and ferocious ‘The Poison Glen’ illuminates questions that Ní Churreáin believes run deep in the Irish psyche: “That question of what happens to a family when a child goes missing is part of our oldest stories, but it’s also part of that colonial wound that many families in Ireland are still tending today.”

The Poison Glen features poems written as responses to various Irish church- and state-run institutions and includes a long poem to honour over 200,000 children who passed through the Dublin Foundling Hospital of the 1700’s:“The Foundling Hospital was a landmark institution in its day. Located on what is now the campus of St James’ Hospital in Dublin 8, it was an institution that set the tone and atmosphere for the Mother and Baby Homes to come. During the research process I was interested in stories of women who travelled from all across rural Ireland, often on foot, to bring their children to the city foundling crib. It’s astonishing to me that no marker exists on site today for these ‘foundlings’, many of whom died.”
Ní Churreáin is no stranger to poetic explorations of mother and child separation.

Many of the poems in her debut collection Bloodroot (Doire Press, 2017) reference a family connection to the Irish Mother and Baby Homes and look at the dynamics of intergenerational grief, particularly in relation to families forced to relinquish children to adoption. In The Poison Glen, she returns again to the subject but this time with a wider lens: “I spent a lot of time with The Ryan Report, 2009, to try and understand the broader system of church and state care in Ireland over the past hundred years and beyond. I listened very closely to the stories shared with me by survivors of institutions. I spent a lot of time visiting the sites of former industrial and reform schools. And during the writing of the book I was in the role of care-giver to an unaccompanied minor who came to Ireland seeking asylum. So, the theme of family separation is one that continues be deeply resonant for me. It’s one that has been with me, one way or another, from a young age.”

Restorative Justice
A recurring concern in Ní Churreáin’s poetry is the reclamation of erased or obscured female perspectives. In structuring the poems of ‘The Poison Glen’, Ní Churreáin explores not only the voices of Balor and Lugh, but the voices of Balor’s wife Kathleen, of Eithne and of Eithne’s handmaids: “It was important for me to make visible again the female narrative and to give the women in my mythological family a space to speak. I was very inspired by the idea of restorative justice circles, and influenced by the work of Dr Marie Keenan at UCD who is a campaigner for restorative justice—a concept that dates back to the Brehon Laws. What kind of healing can occur in a story when everyone is allowed to speak? When everyone is allowed to listen?” Some of the questions a typical restorative justice circle might ask are; Who has been harmed? What needs to be done to repair the harm? Who should repair the harm? How might this be done?”

The Poison Glen is dedicated to Ní Churreáin’s foster-brother who died tragically in 2014 at the age of 23: “There has been a great sense of new light for me in this book. Sometimes writing is way of breaking a silence, and of coming to terms with the past.”
Included in the poetry collection are a series of protective charms related to creatures and rooted in pre-Christian Ireland. Many of the poems look to Donegal folklore and ancient magic. A key point of reference for these poems was Lugh’s Forgotten Donegal Kingdom by Brian Lacey, Four Courts Press, 2012. Her second full-length collection of poems is available from Gallery Press and available from gallerypress.com. The poet will host the Solas Weekend Writing Retreat, at the Songhouse in Falcarragh for more information go to www.studiotwentyfive.com.