Fergal gets a real buzz from the bees and his beekeeping 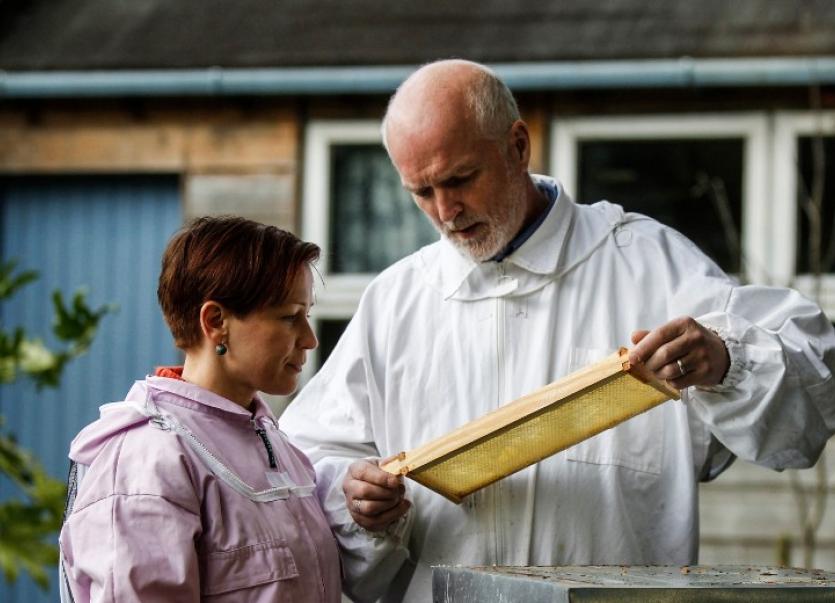 Fergal Megannety is one of Donegal’s best known commercial photographers but what is less well known about the Wicklow native, who now counts Donegal as his home,  is that he is also a keen beekeeper.

The beekeeping is a fairly a new adventure, though his interest in bees and beekeeping is much older. He is now the proud owner of five beehives and a member of the Three Rivers Beekeeper Club. Last summer, with great delight, he harvested his first honey.

The Three Rivers Beekeepers Club draws its members - currently 53 in number and rising - mainly from east Donegal and west Tyrone  and they use the Community Centre in Doneyloop, on the Donegal Tyrone border adjacent to Castlefin, for their gatherings. “I got my first two hives a little over two years ago, though I always had an interest in bees and beekeeping,” said Fergal, who moved to Donegal from Bray to live and work in 1981 and has long made Donegal his home.

“I remember going to a meeting on beekeeping here in Letterkenny over 20 years ago. But at the time I was just too busy with work and other commitments at the time.”

Fergal finally took the plunge and with his wife Sveta, who also has a keen interest in bees and beekeeping, did their first course on beekeeping and hive management three years ago. He invested in his first two hives a  liitle over two years ago.

“We were at a food fair in Derry, myself and Sveta,  just over three years ago and we picked up a leaflet and some literature on beekeeping and that really kindled my interest.

“It was through this we first became aware of the Three Rivers Beekeepers’ Club and we signed up for an introductory course on beekeeping.”

Fergal is a great believer in learning as much as you can about beekeeping before you invest in a hive of bees or getting involved in beekeeping.

“I feel it is important that anyone contemplating taking up beekeeping should first do an introductory course. There is so much to learn about beekeeping and the maintenance of hives and there are so many diseases out there to be on the look out for.

“Veroamite is one of those diseases and not just here in Ireland but it is a worldwide problem. It is a real big problem and you have to constantly watch out for it. It could literally wipe out your whole colony of bees in a matter of days.

“You have also to watch out for other activity in the hive like the emergence of a second queen.

“The queen is the boss in the hive and there can only be one queen per hive and if another one appears she must be removed immediately.

“But you learn all about that at the introductory courses.”

Anyone interested in taking up beekeeping should note Three Rivers Club are currently taking entries for their next introductory course which they are running at the end of the month.

“We feel it is important too to keep updating our knowledge and learn more and more about beekeeping. There is so much to learn about keeping bees and managing them.

“I really feel it is important to learn as much as you can because I think that was the problem years ago people got hives and put them in the back garden and left them to their own devices.

“Many of these hives failed; either the bees died from diseases or other queens emerged and moved out of the hives taking the bees with them.”

Fergal, when he started  initially invested in two beehives.  In the last two years he has added three more and now is the owner of five hives.

Even though beekeepers wear protective clothing and protective headgear and take all the necessary steps to avoid bee stings unfortunaly there are part and parcel of beekeeping.

Stings were initially a problem for Fergal when he started out first but that is no longer the case and now his body is adjusted to the effects of stings.

“They say bee stings are good for arthritis. I’m not sure how true that is but when I started first I used to have a very bad reaction to stings.

“It was really bad but as time wore on and I got more used to stings and the effect lessened.

Fergal harvested his first honey last August and the five hives produced 50lbs of honey which he shared out among family and friends. He also kept a quantity of jars in stock for casual visitors such as this writer.

Fergal and Sveta are currently in the middle of an Intermediate course which is more advanced again than the introductory course. They are keen beekeepers now and are increasing their knowledge on what has in a short space of time become more than just a hobby.

They are also highly involved with the Three Rivers Beekeepers Club where Fergal is the PRO and Sveta, an accountant by profession, is the treasurer. The other officers of the board are John McClure, from Castlederg who is the chairman and Anthony Gallagher from Dunlewey, who is the secretary.

The next Three Rivers Beekeepers introductory course begins on Thursday night February 28 and runs every Thursday night for a number of weeks and includes a series of lectures and talks on beekeeping.