Japanese earthquake, a year on

A few months after last year’s earthquake and tsunami in Japan, Donegal man Ray Meenan undertook a charity cycle from Toyko to Sendai - one of the areas worst hit by the disaster.

A few months after last year’s earthquake and tsunami in Japan, Donegal man Ray Meenan undertook a charity cycle from Toyko to Sendai - one of the areas worst hit by the disaster.

During the 370km journey- which raised money for children’s hospitals in the worst affected areas Ray witnessed the devastation experienced by so many people in the country that had been his home for 23 years.

“It was a pretty hellish ride but getting to Sendai only a few months after it happened was an experience I’ll never forget,” he said. “When we finally made it to Sendai at the end of day three we were all totally exhausted but pleased we had done it. We met some people in the city and they were all happy we had come because they were afraid that foreigners would not come back to their city.

“One of the charity leaders took us around in her car and showed us the devastation. What we had seen on TV no way came near to what we were seeing ourselves. We saw the military still out looking for bodies and actually finding some as we were there.”

Toyko had been Ray’s home after he went on a teaching programme for one year in 1981. He now works in Hong Kong after being forced to move due to the economic climate resulting from the earthquake.

This Sunday marks the first anniversary of the disaster which claimed over 18,000 lives. The magnitude 9 earthquake caused a tsunami which devastated parts of the north east of the country and took the lives of over 90 per cent of the victims.

A damaged reactor at the Fukushima nuclear plant brought the country close to nuclear disaster and fears of radiation contaminating the food supply have been a huge concern over the past 12 months.

For Ray, the year since the earthquake has passed very quickly. On the Friday afternoon the earthquake struck he was in his office in Toyko. “The whole weekend was surreal with non stop aftershocks and everyone was walking around with phantom quake syndrome, that is the constant feeling of swaying, the same you get after a long boat trip. I had that for a good two or three weeks.”

There are very few lives in the country that it has not impacted in some shape, form or fashion. For Ray it was the economic repercussions that have changed his life - forcing him to move to Hong Kong for work while his wife Yuko and two children Seafra and Sofia remain in Tokyo. He travels back once a month to see them.

“So the quake in effect has basically changed my life and how we are living as a family. That is something that we have accepted but boy it is hard. So many lives have been changed but I still say that in Tokyo we were inconvenienced that weekend and for a time after it but its nothing compared to the hundreds of thousands of people who now live in temporary shelters, have no work, have no homes and all have lost friends and family. My life has been changed by the disaster but I bet you anyone of these people would take the changes in my life to what they have gone through and continue to do so.”

The economic aftermath of the earthquake has hit the ex-pat community in Tokyo hard and Ray says there is a constant drift of ex-pats leaving Tokyo almost on a daily basis. “In Hong Kong I run into so many people who were in Tokyo a year ago and it’s a direct result or in some way caused by the whole disaster. A lot of people are being relocated in the region, especially people in the financial markets who can do the same job out of Hong Kong or Singapore. A lot of the reasons are all of the above and the stories about a possible huge quake hitting Tokyo within the next few years certainly have made many people extremely nervous.”

But the community that has stayed in the Japanese capital has rallied to contribute to the reconstruction of the country. As well as fund-raising efforts such as Ray’s charity cycle, many ex-pats have given up their time for the clean-up.

“There was a huge rally amongst the ex-pat community in Tokyo to go for weekends to help clean up. I mean villages had simply disappeared off the face of the earth, and what was left was filled with massive amounts of silt and tons of dead fish which all had to be cleared and houses that remained had to be cleaned out to at least try and enable owners to return. This work is still ongoing a year later and the amount of effort the volunteers have put in and continue to do so is just inspiring.”

Ray doesn’t know anyone directly who lost their lives but some of his son’s class mates had relatives from the area who died. But it has had a massive impact on everyone. “There was non stop coverage of it 24 hours a day for about a week and I don’t think many people in Tokyo or Japan slept much that week. my kids used to go to bed with their ski helmets on and their shoes on ready to flee just in case. That’s rather frightening for young children.”

His trip to Sendai really brought home the scale of the tragedy and he was inspired by many of the people he met there.

One of the people he met was a young school teacher who along with colleagues kept 100 children alive in the mountains for three days.

“There was no phone coverage or no way to contact anyone so parents of these children assumed the worst when they eventually got to the school and found it deserted. The young teacher I spoke to had just qualified from university and she is a real hero. It was a real privilege to speak to her and spend time with her. I know her life has changed forever.”

He says the earthquake has brought people closer together and created a sense of unity.

Ray will be back in Japan this weekend for the anniversary and he is happy to be there for it. “It’s going to be a sad reflective time and being together with my family and there watching the TV which will be covering it extensively will be pretty moving.

“Spare a thought for them on this first anniversary and be thankful that in Ireland this kind of natural disaster will never happen.” 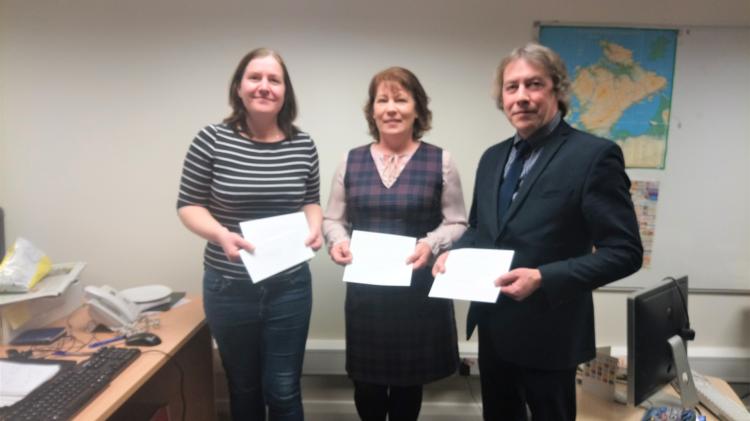