The dived over the three days of Easter, Good Friday, Easter Saturday and Easter Sunday 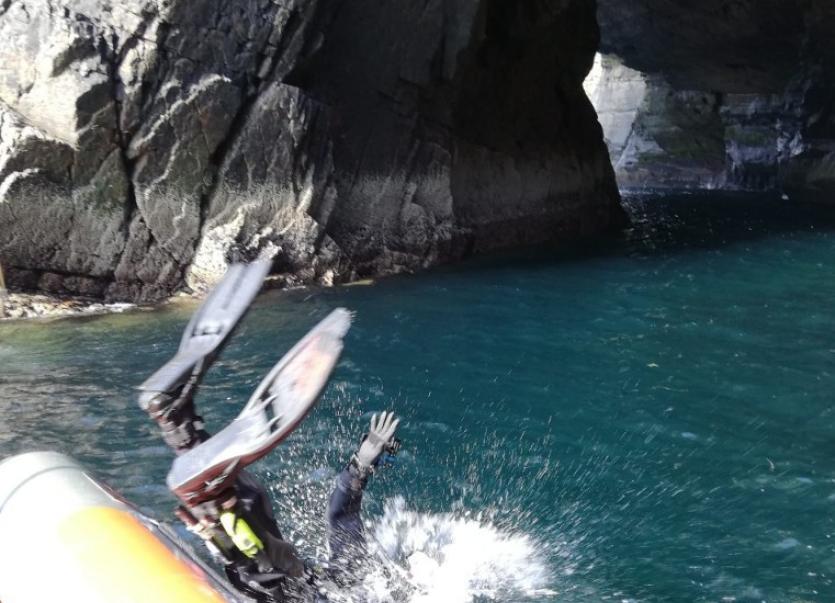 Sheephaven divers took full advantage of the glorious weather over the Easter weekend with a series of boat dives on Good Friday, Saturday and Easter Sunday.

Friday morning dawned with fair weather and little wind, which allowed Kevin Boylan to lead a trip to Tory, where the divers got onto first the Wasp and later a swim-through near to An Tor.

The Wasp, is the wreck site of a late 19th Century Royal Navy gunboat that sunk directly under the lighthouse. The cause of the sinking, which resulted in a very significant loss of life, is shrouded in mystery and all that remains are three of the ships cannons, now encrusted in marine growth.

The divers conducted their mandatory two hour surface interval at the little port on the east side of the island, where the full glory of the islands rugged coastline was a marvel to observe.

The second dive commenced at a swim-through near to An Tor, in crystal clear water, where there are excavated bowls, boulders, ledges and wonderful overhangs to explore all the way to a depth of nearly 30 metres.

Dive times of nearly 60 minutes were recorded on the first dive, but the cold water took its toll and the second dive was more conservative at over 40 minutes.

In addition, to enjoying a great days diving the club members were blessed with meeting an agglomeration of Basking Sharks.

It seems very early in the year to see Basking Sharks but they must have been around for a while as some have been tagged.

Saturday mornings’ dive was conducted in conjunction with visiting divers from UCD and allowed one of their new divers the opportunity to sit his 2 Star or Club Diver exam, under the watchful eye of Sheephavens Mon 2 Paul McCabe.

Darry Connell from UCD successfully passed his exam and his colleague Mahdi Enterzary an Mon 3 with UCD got to enjoy a good dive at Melmore Head.

In-water conditions were reasonable, with a minimal sea running but visibility down to 4 or 5 metres as the Plankton bloom has started in earnest.

Water temperature is still in single figures, but is quite tolerable none the less and dive times of up to 40 minutes were recorded with maximum depths of 28 metres achieved just of the tip of the headland.

Large fish life is making a welcome return after their winter absence, with Ballan Wrasse and Pollock of all sizes observed, but so too is the less welcome presence of Octopus who have a significant foothold into the Lobster stocks on which the predate.

Sunday morning brought the divers back to Mevagh slip way and from there back out to Melmore Head were the fierce Spring tides were running, but another great dive was enjoyed by all, thanks in no small part to the presence of a dry coxswain in the person of Ryan Ward.