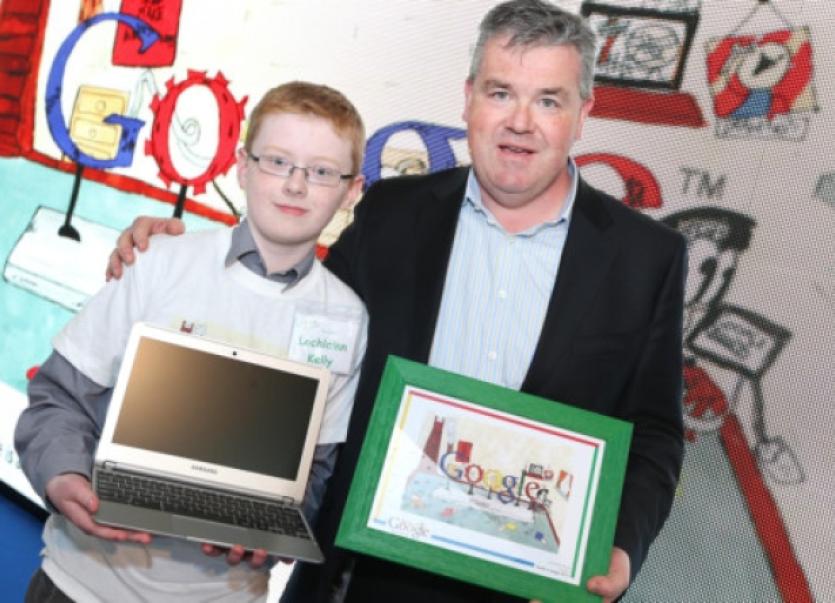 Lochlainn Kelly from Scoil Iosagain, Buncrana, has won the 3rd, 4th, 5th, 6th Class category of Google’s fifth annual Doodle 4 Google competition. Lochlainn competed against the competition’s other finalists and won the most public votes of any entry in his age category.

Lochlainn Kelly from Scoil Iosagain, Buncrana, has won the 3rd, 4th, 5th, 6th Class category of Google’s fifth annual Doodle 4 Google competition. Lochlainn competed against the competition’s other finalists and won the most public votes of any entry in his age category.

Google doodler Kevin Laughlin, who is part of the official doodle team based in Google Headquarters in Mountain View California, presented Lochlainn with his award at a special ceremony in Dublin.

The overall winner, who was selected by Kevin was Annie Coyle, a 15 year old student from Letterkenny who is a pupil at St. Bernadette’s Special School in Letterkenny. Annie’s doodle will be seen by millions of people when it appears on the Google Ireland homepage. Annie’s school will be awarded a €10,000 technology grant while Lochlainn and his fellow group winners and their teachers will receive a personal laptop computer each.

The theme of this year’s competition was ‘My invention…’. Lochlainn’s doodle was called Google internet and he described his doodle as, “My Doodle 4 Google is about a boy who makes his own internet router modelled after the Google logo.”

Kevin Laughlin, official Google Doodlers said, “We run Doodle 4 Google competitions in many countries around the world but the Irish Doodle 4 Google is one of the most hotly contested competitions every year. It was difficult to pick the overall winner but in the end I found Annie’s simplicity and restraint delightful and compelling. “

John Herlihy, head of Google in Ireland said, “Creativity is the driving force of everything we do at Google which is why I enjoy the Doodle 4 Google competition so much. This year’s theme “My Invention...” really highlighted the potential that Irish children have to drive innovation in Ireland in the coming years.”

All of the Doodle 4 Google finalists were invited to Google for a special event and prize-giving to celebrate their achievements. They also had the opportunity to take part in a doodle workshop with professional doodler Kevin Laughlin.

An expert panel of judges including rugby player Rob Kearney chose the 75 finalists, who went forward to the online public vote in February. Almost 100,000 votes were registered by the public and the doodles with the highest number of votes in each class group made it through to the overall finals. From these five group winners, Kevin Laughlin selected Annie as the overall winner.