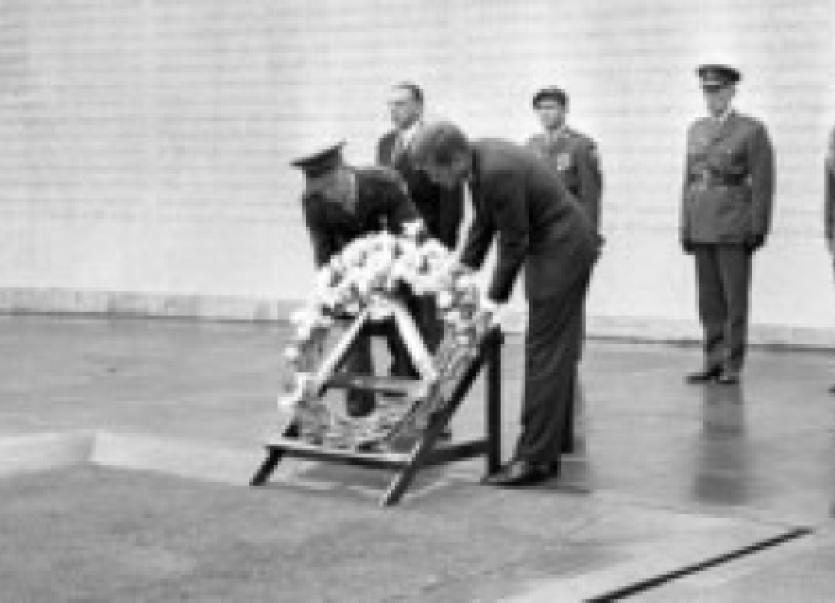 A 93-year-old Donegal man is featured on one of two commemorative stamps which are being launched today as part of the JFK 50th celebrations in Ireland.

A 93-year-old Donegal man is featured on one of two commemorative stamps which are being launched today as part of the JFK 50th celebrations in Ireland.

Paddy Daly from The Mall Ballyshannon (and originally with family based in Kildoney), who now lives in Dublin, is pictured on one of the stamps along with US President John F. Kennedy, and then Taoiseach, Seán Lemass. The photograph was taken at a special ceremony in Arbour Hill Garden of Remembrance on June 28, 1963.

He entered the Irish army out of St. Eunan’s College, Letterkenny in 1939 and was gradually promoted up through the ranks of the army. At the time of his retirement in 1981, Paddy was Brigadier General of the Eastern Command. In view of his high rank as Adjutant of the Eastern Command in 1963, he was selected to be the man to assist President Kennedy with laying the wreath at Arbour Hill.

Asked about his memories of the day, Paddy said: “I felt very honoured to be able to do it. Arbour Hill was a beautiful ceremony. It was unique and will never happen again. Arbour Hill was the most dignified and touching ceremony of the lot.

“There was a big military contingent at Arbour Hill. There weren’t any people there other than the immediate Kennedy people, their supporters and the government dignitaries. It wasn’t open to the public.

“What we did for JFK at Arbour Hill was just a modification of what we did for the 1916 ceremonies, but it took a lot more attention. We were all in position at Arbour Hill for the President’s arrival. The cadets did an official guard of honour and, when the honours had been performed, I assisted JFK with bringing the wreath to the podium.”

President Kennedy later said of his four-day trip to Ireland: “For me the highlight was the ceremony at Arbour Hill. Those cadets were terrific.”

Martin McCool, who has researched the subject, writes that the aspects of the ceremony were adopted for JFK’s own tragic funeral just months later.

“JFK was deeply impressed by a crisp drill ceremony performed by cadets from Ireland’s Military College at The Curragh.

“He described the Arbour Hill memorial services to his wife Jackie so impressively and in such detail that she made arrangements on the flight from Dallas after the assassination to have the Irish cadets re-enact the drill from Arbour Hill at the President’s graveside during his burial. So Donegal man Paddy Daly had a central role in what is arguably the most important event during President Kennedy’s visit to Ireland in June 1963.”

The base of the wreath laid by President John F. Kennedy and Paddy Daly at Arbour Hill is now at the Kennedy Homestead in Dunganstown, Co. Wexford.