Donegal revel in the rain as Tyrone get washed away 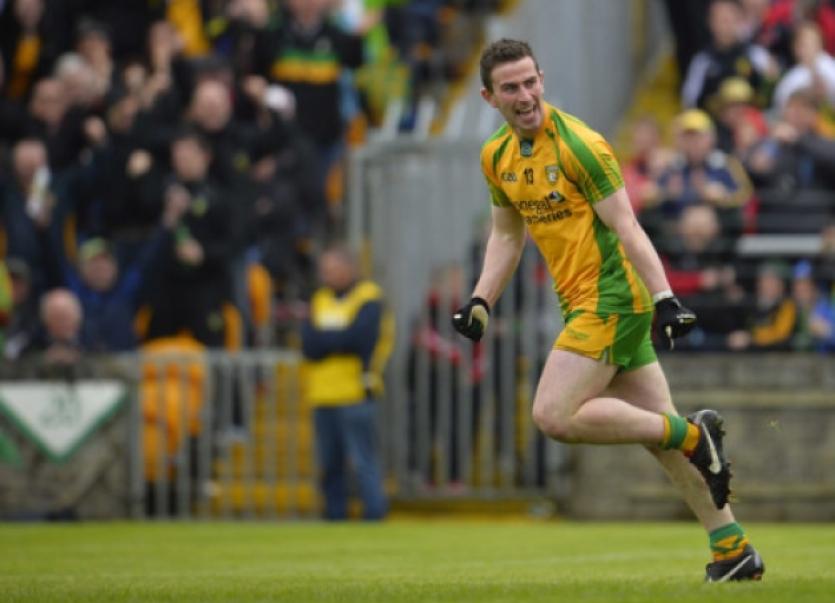 The Twin Towns of Ballybofey and Stranorlar enjoyed a much needed commercial boost as more than 18,000 football fans descended yesterday for an eagerly awaited Ulster Quarter Final championship clash.

The Twin Towns of Ballybofey and Stranorlar enjoyed a much needed commercial boost as more than 18,000 football fans descended yesterday for an eagerly awaited Ulster Quarter Final championship clash.

Hawkers, fish and chip vans and the ubiquitous ‘hats and flags’ sellers had ear marked their pitching points for several days and despite the heavy rains that would fall later, the sun shone (very briefly) in the build up to the match as the environs of Sean MacCumhaill Park heaved to the sounds and colours that are pure championship.

Word on the street had it that Karl Lacey was very doubtful and there were concerns too for Anthony Thompson.

1982 All Ireland under 21 winning manager Tom Conaghan and the captain of that winning team, Brian Tuohy, met by chance at the back of the stand as throw-in time drew nearer. they couldn’t wait for the game to start, giddy almost with anticipation.

Tuohy had it on good authority that Lacey wouldn’t start and the hard-as-nails former Aodh Ruadh, Donegal and Sligo inter-county man has impeccable sources, as he accurately told us that Mark McHugh was unlikely to start too. He didn’t, unfortunately, have the lotto numbers. Well, he didn’t offer them.

Two yards away Noel McCole, the man between the posts for a decade and more for Donegal, admitted to being a wee bit nervy, but he felt we would win. Brian McEniff, wearing that green peaked cap that seems to loiter rather than sit on his head, was very confident. “We’re better, simple as that, we will win,” he said in a slow, unemotional voice. It had the feel of a father telling a son ‘it will be ok’. Very reassuring.

Pete McGrath, the former Down boss, slipped in quietly, he wouldn’t be drawn, but agreed that he would be surprised to see Lacey start.

And, as the familiar tones of MC Naul McCole’s voice rippled across the much improved PA system, the doubts were confirmed.

Lacey, who had participated in the warm up wearing number 6, was in fact not starting. Also out was Mark McHugh. In their place the two Walsh men, Declan and David.

Interestingly, much was made of the fact that Lacey hadn’t played a competitive game since the All Ireland having undergone surgery, but it’s also true that David Walsh has spent his winter re-building a damaged shoulder and Sunday was his first competitive inter-county start since September. All things considered he put in a superb shift which he topped off with a stylish early game point.

The game was absorbing. An Armagh man beside me just loved it and he didn’t care who won. The level of hits were extraordinary. Some were borderline, all were unforgiving. No complaints from most players and fans, although a painfully opinionated Tyrone man behind me overdid playing ‘Mr Indignant’.

Elsewhere the experts will identify the turning points, but one small thing that struck me as important was the way Donegal psyched out the Tyrone keeper when he took those long range frees. Clearly unnerved by the ‘Donegal wall’ of two and three players he faced every time he took a long distance free kick, his return of just one score was a ‘victory’ for Donegal’s simple tactics. The first man I saw insist on this hands up/cover the free taker approach was Jackie McDermott, coaching an Aodh Ruadh under 12 team 40 years ago!

Donegal drove over early points, Tyrone were never far away. Goals win games and Donegal’s inside line always had the beating of the Tyrone backs. McFadden was sharpest he has been since September, McBrearty, on fire at club level replicated that club form on Sunday. He flicked on the after burners to skip away from two bewildered Tyrone defenders before setting up the recently arrived Ross Wherity for a crucial goal. McBrearty’s deft flick to McFadden from a long punted Murphy free, the other piece de resistance as McFadden on his ‘other foot’ guided the ball home to the net.

In the end there was never any doubt. McEniff was right.

McHugh and Lacey arrived when needed and their involvement suggests that four weeks from now, barring injuries, Donegal will be in an even stronger place with more options than places.

During the league there were question marks over the strength in depth of the Donegal panel. Wherity in particular has wintered well and the rawness we saw in Croke Park against Kildare is gone and a more lethal player has emerged. There are worries. At midfield Donegal failed to win a ball for too long, yet survived on scraps and broken ball.

Tyrone, after the second Donegal goal, withered in front of the 18,000 door jammed into MacCumhaill Park. The rain danced down, it wouldn’t be an Irish summer without it, but Donegal seemed to revel in it.

With eight minutes left fans were leaving. Donegal drove home their superiority and Tyrone boss Mickey Harte said he felt that this was a very impressive Donegal team who deserved what they got - victory.

Out on the streets burgers were being offered at half price. Wet fans bundled into cars and buses to go home, the delays getting out of Ballybofey were lost in the euphoria of this win.

No one mentioned the cost of the tickets or the lack of them. It’s amazing what a win over Tyrone can do!