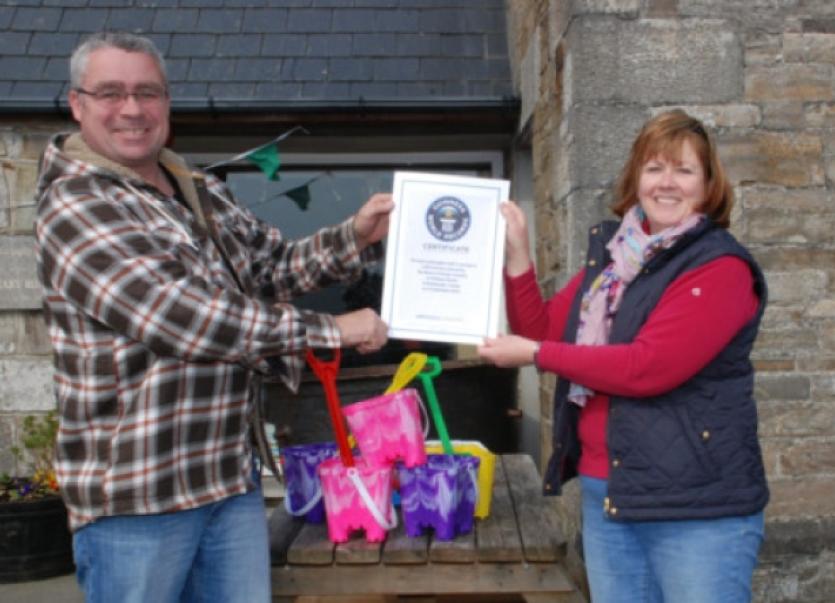 The dust has finally settled on a special sandcastle building world record attempt that took place in Dunfanaghy last summer when it was officially accepted by the Guinness World Records this week.

The dust has finally settled on a special sandcastle building world record attempt that took place in Dunfanaghy last summer when it was officially accepted by the Guinness World Records this week.

Last September hundreds of beach loving volunteers turned out to take part in the world record attempt to build the most sandcastles possible in one hour.

The event took place on Killahoey beach where the local Waves of Change project, based in Dunfanaghy Workhouse, joined forces with a number of local schools, community groups and individuals in a race against time and tide to beat the existing record of 683.

From the minute the gun sounded to mark the start of the challenge, people of all ages got stuck in to building one metre square mounds with a four turret castle perched on top, which had to be deemed complete by a panel of judges.

The next time they heard the boom of the gun it was time to walk away from the area and the counting began.

It became clear it was a good effort when they ran out of individual marker flags after 800. Then the counting continued, and continued, before the officials returned with a total of 1,939 complete sand castles.

The beach erupted with the good news but this was only half the battle as the figures, documentary evidence and reports had to be submitted to the authorities at the Guinness Book of World Records for official verification.

The group have waited tentatively for their decision but last Monday morning a letter came through to Dunfanaghy Workhouse containing a large certificate to state they had entered the history books and had smashed the previous record.

Sian McCann, the project organiser, said, “We were absolutely blown away by the support for the project and although I was confident we could break the record I never imagined we would beat it by so much. It is a fantastic achievement for such a small village but I think this just goes to prove that anything is possible when everyone works together.”

There were about 15 groups involved as well as the five local national schools and lots of parents and grandparents turned up on the day to give a hand, she added.

“A lot of people have been asking if we are going to do anything in 2013 and I hope we might look at setting a new world record for the largest Ring a Ring a Rosie.”

Gabriel Doherty from the Waves of Change project says they were delighted to get the confirmation and praised the good work of everyone who took part in the achievement.

“We got notice of it on Monday by post and it was a big surprise. It was a large envelope with Guinness World Record’s marked on it and when we opened it, it contained the certificate saying we had the record.

“Quite a few loud cheers went up when we got the news, people outside must have been wondering what was going on,” he laughed.

The organisers have also produced a special DVD of how the spectacular record was achieved which is available from the Workhouse.