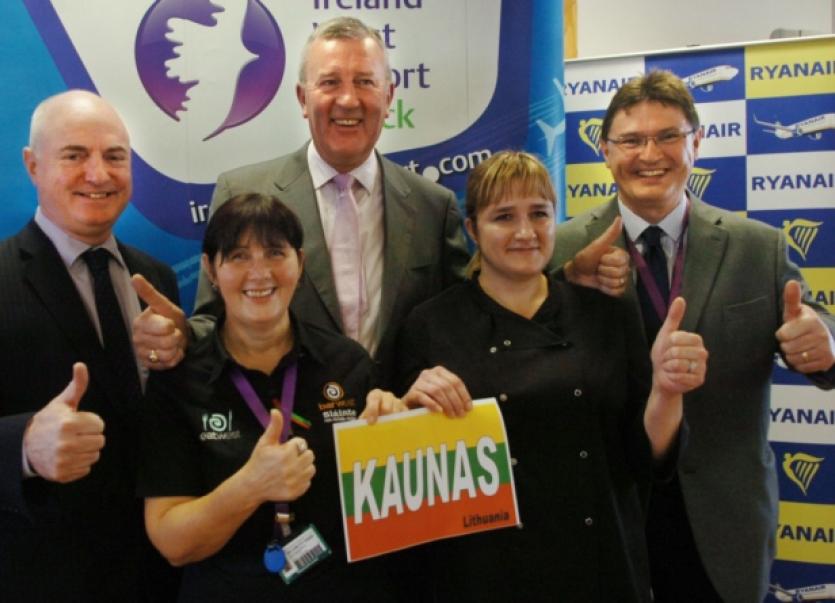 Ireland West Airport Knock are delighted to announce a major boost for the West of Ireland with the news that Ryanair will commence three new direct services to Eindhoven (Holland), Glasgow (Scotland) and Kaunas (Lithuania) from next April.

Ireland West Airport Knock are delighted to announce a major boost for the West of Ireland with the news that Ryanair will commence three new direct services to Eindhoven (Holland), Glasgow (Scotland) and Kaunas (Lithuania) from next April.

In addition Ryanair will add evening services on Fridays and Sundays on their London Luton and London Stansted services to cater for business and commuter traffic to and from the London market.

These new services are forecasted to increase passenger numbers through the airport by an estimated 80,000 in 2014 which will see the airport reach the milestone of over three quarters of a million passenger for the first time in its history. Further to the announcement of new routes Ryanair will add an additional 60,000 seats on their hugely popular Luton and Stansted service to cater for the increasing demand amongst the business and commuter market.

Welcoming todays announcement, Minister of State at the Department of Transport, Tourism & Sport, Michael Ring TD said ‘I’m delighted to welcome the announcement by Ryanair today to introduce new UK and European services at Ireland West Airport Knock. I will work with the team in Tourism Ireland to ensure we do all we can to promote these new services overseas and to help ensure these routes are a success for the West and North West regions and bring a much needed boost to the tourist industry in these regions’

Commenting on Thursday’s announcement, Michael Cawley, Deputy CEO, Ryanair said “Ryanair is pleased to announce 3 new routes and increased frequencies on its London routes from Ireland West Knock from April 2014, which will deliver 80,000 new passengers p.a. and support up to 80 new jobs across the region. This growth is in direct response to the Government’s very welcome decision to scrap the €3 air travel tax from April 2014. The scrapping of the travel tax will help restore Ireland’s competitiveness and attractiveness to overseas visitors from the UK and Continental Europe in particular.”

Joe Gilmore, Managing Director Ireland West Airport Knock added, “We are delighted to welcome these new services with Ryanair which will provide a major boost for tourism in this region and for the first time connect the airport with key markets in the Benelux region and emerging Baltic States. We thank Ryanair for their continued confidence and support for the airport and the West and North West of Ireland and furthermore we hope these new services will attract the full support of all tourism interests in the region as they will require even greater effort on all our behalf’s to ensure they are a success and are maintained for the longer term. We expect further positive route development announcements in the coming weeks.”

Starting April 2014 flights from Ireland West Airport Knock to Eindhoven will operate every Tuesday & Saturday with flights to Kaunas every Thursday and flights to Glasgow will commence in June on Wednesdays, Fridays and Sundays. The new services will go on sale on the Ryanair.com website tomorrow.