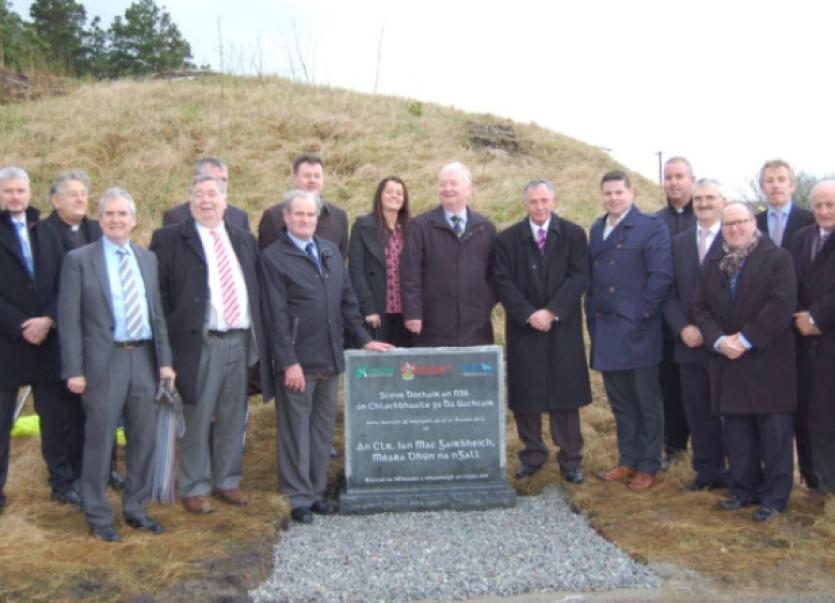 The upgrade of the N56 from Cloghbolie to Boyoughter is the first phase of a larger project that will see the N56 upgraded from Dungloe to Glenties (Kilraine). Mayor McGarvey said the project represents “an important step in improving the accessibility of west Donegal and is to be welcomed wholeheartedly”.

The scheme will address the poor alignment and narrow cross-section of the N56 and includes the provision of designed overtaking sections. The scheme also includes a cycleway/footpath for the full length.

Speaking at the opening, County Manager Seamus Neely said the 3.3-kilometre stretch of the first phase is a small but significant portion of the larger, 26-kilometre N56 project. The manager said that the particular challenges the Meenacarn Bends presented made it an appropriate place to start the work. The N56 scheme is part of a pilot programme that the National Roads Authority (NRA) announced in 2009.

The Donegal National Roads Design Office (NRDO) in Donegal town conducted the preliminary design for the scheme and carried out statutory processes, in what the manager said was a collaborative approach the council enjoyed with the NRA. He thanked council engineers Brendan O’Donnell and Fergus Towey and the Donegal NRDO team, working under the direction of Aidan O’Doherty and the NRA.

Mr. Neely also noted that the scheme has been completed within budget and within the expected time frame. Fox Building and Engineering Ltd. in Tyrone was the contractor on the project.

Earlier this month, Donegal County Council learned that they would receive 1.56 million euro for work on the N56 project this year, less than the 6.3 million euro the council delegation had requested when they met with the NRA in December.

The N56 scheme has received 8.5 million euro to date.

In a statement, Fred Barry, CEO of the NRA, said, “We remain focused on completing the entire upgrade between Dungloe and Glenties, as funding becomes available.”

Mr Barry called the scheme, “an example of what the National Roads Authority is trying to achieve throughout the county, on its national secondary low volume network, that combines access for all road users utilising the existing road that fulfils a local need in a timely manner”.

During the December meeting, the NRA told the council delegation, which included Glenties Electoral Area Cllrs. Marie Therese Gallagher and Seamus Ó Domhnaill, that there was no funding for the N56 project in 2014. However, when allocations were announced earlier this month the N56 was on the list.

Area councillors said the allocation would keep the project alive, but have called on the government to provide the full amount.

Cllr. Gallagher welcomed the money but said, “Our attention now has to focus on ensuring that funding is secured to complete this project. We in west Donegal have a huge deficit in our roads network.” She said the state of the road has hampered development and job creation over many years.

Speaking after the road opening, Cllr. David Alcorn said he was delighted to see the progress made on a project for which he had long campaigned. Former councillor Enda Bonner, who attended the opening, said he first raised the issue of the bends in 1999, his first year on council. “I’m very happy to see it done,” he said.