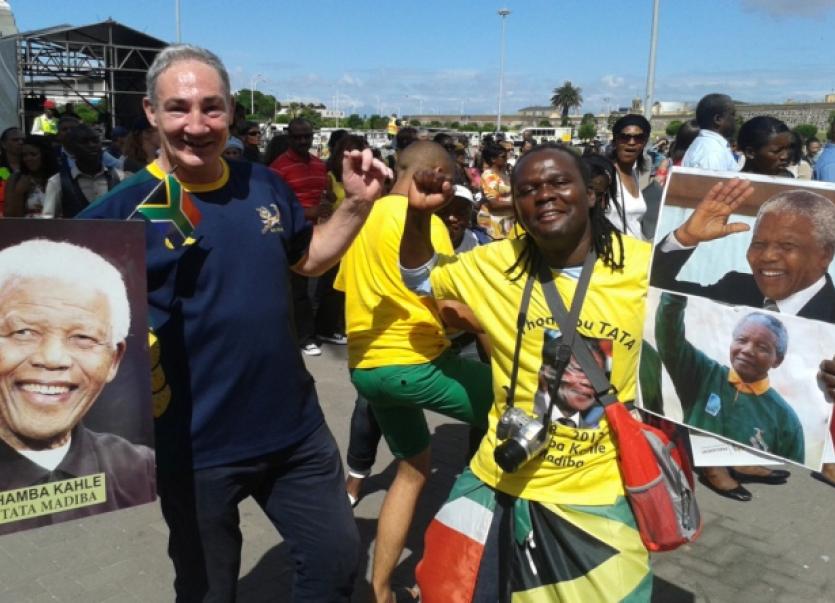 Nestled in one of the most dramatic scenic settings of any city on earth this is Cape Town. I travelled here only last week to capture the historic time that Nelson Mandela’s passing brings.

Nestled in one of the most dramatic scenic settings of any city on earth this is Cape Town. I travelled here only last week to capture the historic time that Nelson Mandela’s passing brings.

Yesterday I was at Grand Parade civic centre where he gave his first address after being released from prison. Thousands of people of all ethnic backgrounds were there to celebrate his life with music and dance. It is hot but not humid. The Cape Peninsula experiences a weather feature at this time of year which is known as the ‘Cape Doctor’. It is formally termed the ‘south easterly wind’ which can be quite strong at times. It keeps the air clean, fresh and cool which allows a pale foreigner like me to survive the exhausting heat.

We cannot palpate the loss that Nelson Mandela is in Ireland. But our children will read about him in their history books in time to come. The media, especially the print media is cover to cover with articles dedicated to this great man.

As South Africa reels after the loss of a true icon, they find themselves faced with images and collective memories of him. He brought a divided country together, changed South Africa into a true democracy, ended apartheid, forgave those who tried to kill him and became the first black president of South Africa.

The 2009 film ‘Invictus’ was centred on Mandela’s influential role in garnering public unity through sport, one of his essential motivations for the reintegration of a people divided. People here talk about that deeply engrained image of a smiling Nelson Mandela, hand raised and waving to the crowd, wearing the green and gold as he strode proudly onto the rugby pitch as the president of a land slowly coming to grips with a new healing spirit. When the South African rugby captain claimed the World Cup both he and Mandela stood triumphant on a world stage, hands clasped in a friendly and congratulatory shake, people from across the globe witnessed the power of Mandela magic.

His funeral took place in Qunu in the Eastern Cape. It is about a twelve hour drive from Cape Town. The closer and the deeper one travels into the Eastern Cape the worse the roads become. Cape Town is not a true representation of the real South Africa. This is a tourist metropolis, very well developed with superb infrastructure. There are many rich white people here who still dominate the economic market. I am writing this article from the campus in the University of Cape Town. I only see black kids here who are the future of this new South Africa. Many students are currently finishing writing exams.

Today (Monday) is The Day of Reconciliation, a public holiday in South Africa held annually on 16 December. The date was chosen because it was significant to both Afrikaner and African cultures. The holiday came into effect in 1994 after the end of apartheid, with the intention of fostering reconciliation and national unity. The day is also the de facto start of the South African summer holiday period being the first of four public holidays to fall in a sixteen-day period at the height of summer.

For Afrikaners, 16 December was commemorated as the Day of the Vow, also known as Day of the Covenant or Dingaan’s Day. The Day of the Vow was a religious holiday commemorating the Voortrekker victory over the Zulus at the Battle of Blood River in 1838, and is still celebrated by some Boers. On the other side of the political spectrum, 16 December is also the anniversary of the 1961 founding of Umkhonto we Sizwe (Spear of the Nation), the armed wing of the African National Congress. So there is much reconciling to be done at you see.

At times it is embarrassing to be a white person here knowing what our colour inflicted on the black people. Although the government here is corrupt, South Africans for now put up with it because it is nothing compared to what previous successive white governments did to this country in recent history.

I was in Soweto once, a long time ago. Soweto is South Western Township. Most black people live in these informal settlements where living conditions are abject. A tour guide brought me there in a car. As he drove around showing me this and that, he was looking straight at me all the time. All I could see was the white of this huge black man’s eyes. I was afraid of him. He asked me did I know which was the most famous car in Soweto? I was nervous and said that I didn’t know. He said that it was the BMW. He then asked me if I knew what BMW stood for. I got more nervous and told myself that I must make a guess at this before this guy gets annoyed. I asked was it something German and to give me a clue. “No” he said, probably smiling. “It stands for Bob Marley and the Wailers, Be My Woman, Be My Wife, Break My Window and take me home”! Won’t be long.