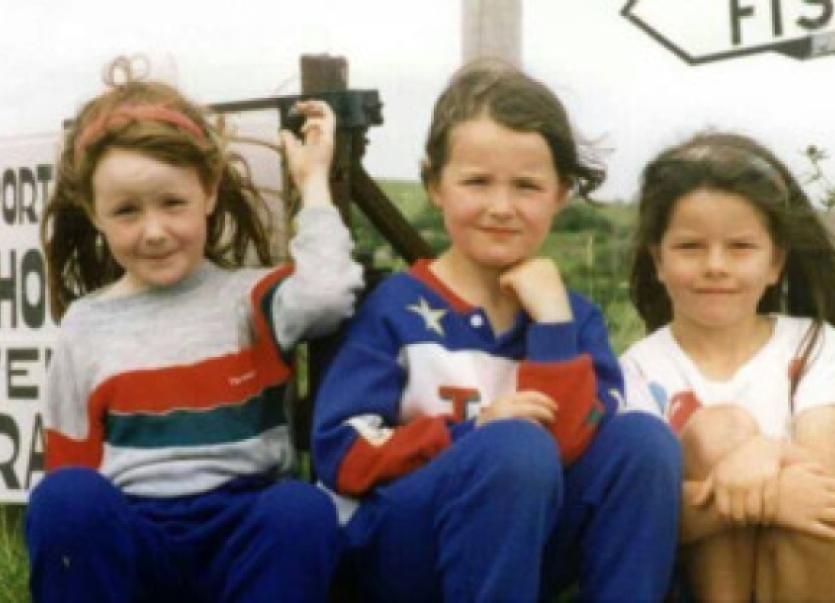 Desmond Campbell took a photo 25 years ago while home on a holiday. This week, he found out who the three girls in the picture are.

Desmond Campbell took a photo 25 years ago while home on a holiday. This week, he found out who the three girls in the picture are.

The picture was taken about a mile outside the village where the American was born.

Desmond recalls: “I spotted these three girls playing and asked if I could take their photograph.”

He always wondered who they were, as he never thought to ask at the time.

This week, he finally found out.

“I’d posted the photo on my Facebook page various times over the years and nobody seemed interested until this last weekend.

“The girl in the centre of the photo wrote to me and told me it was her, a cousin and a friend.”

Fiona Hegarty, on the left of the picture is the lady who contacted him. She and Denise Boyle, on the right, both still live in Ardara. Fiona’s cousin, Deirdre Hegarty, centre, is from Dublin.

A delighted Desmond wanted to share this good news story.

“With all the sad stories in the news, I thought this would be a lovely one for Valentines’ Day, about how Facebook brought us together twenty five years later.”

Desmond was born in Ardara on November 25, 1944. Coincidentally, he shares the same birthday as Fiona.

His parents, who are both deceased, owned The Bridge Bar.

He was the eldest child and still has lots of family here; his brother Francis who is married to Josephine and lives at Loughros Point; sister Nuala who is married to Tommy Walsh and lives in Lettermacaward; brother Colm who is now retired but was manager Bank of Ireland in Donegal Town, Glenties and Ballybofey. Three of the family, Colm’s twin Jimmy, their brother Stephen and sister Martina Campbell McFadden live in London,

Desmond absolutely loves Ardara and comes over as often as he can.

He was home in November and plans to retire here within the next two years.

The 69-year-old is likely to be ready for a good rest because, in addition to working two jobs, Desmond has raised tens of thousands of dollars for various charities. He’s run marathons - including one in Chicago and one in Dublin within weeks of each other, as well hiked the Grand Canyon and El Camion de Santiago de Compostela.

It’s something he’s been doing for the last 36 years and he’s all set to run another marathon, this time in his adopted home town of Chicago, next October.

He’s still as enthusiastic as ever. “My two greatest passions in life are fundraising for charitable causes and running marathons,” he says.

You can read about his efforts, and support his charitable work if you like, at descampbell.

Desmond’s hoping to come over to Donegal in the summer and, if he does, a special treat lies in store.

The three ladies in his mystery photo, are all looking forward to meeting up with him.

They’ve even agreed to line up for a new pic at the same location where the last one was taken!