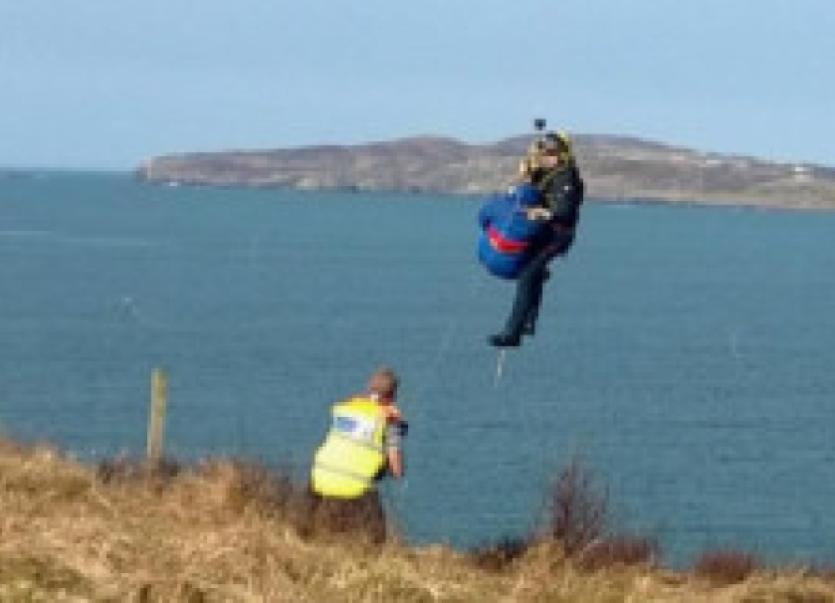 A holidaymaker had to be airlifted to safety after falling in Ards Forest Park, near Creeslough, sustaining a broke leg.

A holidaymaker had to be airlifted to safety after falling in Ards Forest Park, near Creeslough, sustaining a broke leg.

The injured walker, a 62-year-old woman from Kerry was taken to Letterkenny General Hospital.

Speaking to the Donegal Democrat DMRT PRO, Joe Brennan said the walker fell on a “treacherous” stretch of track in the famed beauty spot.

“We picked up the distress call at 12:40 and dispatched a hasty crew to the area. However the Coastguard Unit who happened to have a boat unit on exercise in the area dropped off a crew member on Binnagorm beach and he was first to locate and stabilise the casualty on a headland beyond the locally famous Iron Man.

He remained with her until the DMRT and ambulance crews arrived. The casualty was a 62-year-old female from Co Kerry who was holidaying in the area with her husband. She unfortunately slipped on a treacherous section of track and suffered a broken ankle.”

He added she was in a state of some shock and considerable pain when the rescue crews from the various agencies arrived but in a stable condition .

He added: “Because of the distance she was from the nearest access point, some 2km, a decision was made to call the rescue helicopter.”

According to Mr Brennan she was “rescued in a classic exercise of a highline extraction to the helicopter in perfect weather conditions at 14:45.”

She was transported to Letterkenny General Hospital where she was kept overnight and is underwent surgery on her injured ankle.

The spokesman stated they had “excellent support and cooperation” from the Mulroy Bay Coastguard Unit, a HSE ambulance crew and the Coastguard helicopter crew 118 based at Strandhill in Sligo.

This has been the groups 18th call out this year.

Late last year, due to the significant increase in the number of callouts experienced in the last two years the team were seeking to recruit enthusiastic individuals interested in working as part of the Donegal Mountain Rescue Team to achieve high standards of casualty care in the Donegal’s mountains.