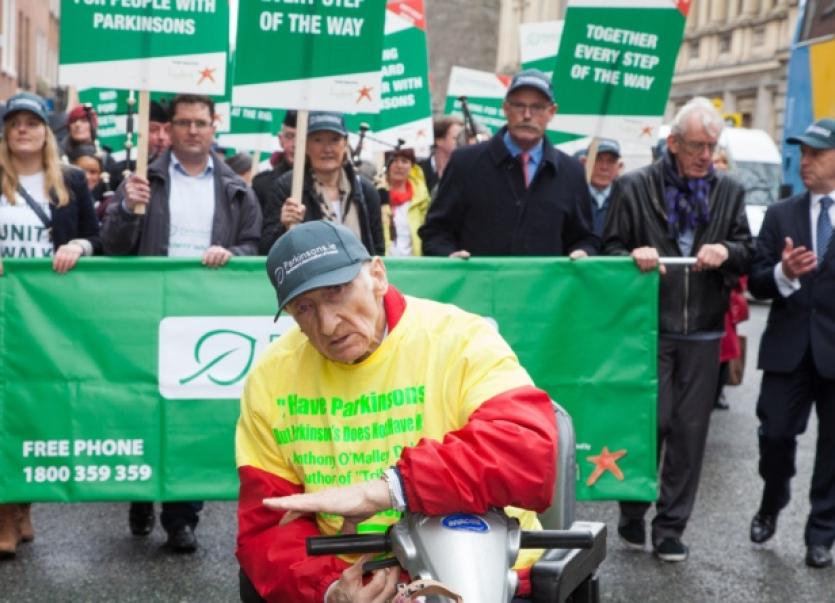 Pearse Doherty TD, delivered an eloquent grave side oration on Sunday in Abbey Assaroe, Ballyshannon at the funeral and burial of Anthony O’Malley Daly. In tomorrow’s Democrat we carry an edited version of what Pearse said, but here is the full oration. We also carry a number of other tributes which we will post to web and facebook over the next two days:

Pearse Doherty TD, delivered an eloquent grave side oration on Sunday in Abbey Assaroe, Ballyshannon at the funeral and burial of Anthony O’Malley Daly. In tomorrow’s Democrat we carry an edited version of what Pearse said, but here is the full oration. We also carry a number of other tributes which we will post to web and facebook over the next two days:

“As we gather her to bid our farewell to Anthony O’Malley Daly we will all have our own memories, our own special wee moments, our own stories of how own Anthony touched our lives and made them better.

Anthony was many things to many people. He was a loving husband to his wife Mary who always stood with him as he took on his next challenge; he was a doting father to his children and grandfather to his grandchildren. He was a keen fisherman, writer, community activist and elected politician. For 3 decades. “He was an inspiration to many and a friend to all. It is not possible to do justice to Anthony’s long life in the a few minutes.

“He packed so much into his 78 years.

“As a young Republican in this county I had heard of Anthony O’Malley Daly long before I met him. Anthony was a proud Sinn Féin representative and his period in office as a Town Commissioner spanned the decades of the 70s, 80s and early 90s during the worst years of conflict in the North. During that time many Sinn Fein elected representatives were targeted by loyalist death squads and as we know from the killing from Anthony’s colleague Eddie Fullerton here in Donegal representing Sinn Féin at that time carried big personal; risks. But Anthony didn’t flinch. He threw himself into every campaign, from internment to extradition to the Hunger Strikes.

He was a supporter of the peace process and knew that true patriotism was more than winning the war but also meant winning the peace. He rejected those who under the false guise of patriotism attempted to destabilise the process

“Anthony would never accept defeat or take No for an answer not just in his political life but in his personal live.

“In later life Anthony was diagnosed with Parkinson ’s disease. He showed tremendous spirity and courage in battling against his illness. He was determined that Parkinson’s would not defeat him and that determination led him to new heights- 10, 000 feet to be exact parachuting from a moving aeroplane to raise awareness and funds and this wasn’t his only fundraising endeavour.

“Anthony O’Malley Daly was a caring man. So much so that he founded his own charitable giving organisation “Mi Amigo” providing funding to worthy causes both locally and nationally. Anthony’s charitable efforts and his undertakings representing those with disabilities was rightly recognised in 2007 when he was named Ballyshannon Person of the Year and again in 2010 as Rehab Donegal Person of the Year.

“I remember one time when Anthony was sick a few years back I called him to see him with the late PJ Branley. We were sitting in the room chatting and relating stories from times gone by when my eye caught a medal on top of the fireplace. I asked him what it was and he told me it was a medal he got for saving the lives of a few people at sea. It was actually the National Bravery Medal.

“To Anthony it was just another story. Because that’s what you do when you’re Anthony O’Malley Daly.

You jump out of planes.

You save people at sea.

You campaign for British war veterans who had been subjected to weapons testing.

You campaign for Irish Unity.

You are humble. You are remarkable.

“Anthony was an irrepressible character and a huge asset to the republican movement in the area. His passing today will touch the hearts of many in his native Ballyshannon and beyond.

I would like to extend my heartfelt sympathies to his wife Mary, children Darragh, Patrick, Orla and Sarah, his grandchildren, great grandchild and his many extended family and friends who will miss him dearly.

“Anthony packed so much into a remarkable life. I will always remember him as a man who showed great strength of character and a true dedication in serving his local community.

“It is best to remember Anthony through his own words, from a poem he published in 2009.

Intercede where truth is being drowned, Rescue the faith,

Pray to God, even swear a prayer,

Impose good where evil is being promoted,

Intervene in aid of the underdog and the battered minorities,

When the cause is right and just.

Even at the risk of your own comfort. Never look away.

when injustices is dulling the minds of many by false auras.

Lead from the front.

But, but, but beware of patriotism,

Least you lead others into rivers of blood.

Intend from now until your sojourn

down the many roads of your life is ended

To talk tall and stand firm.

Honour your family, respect yourself , enjoy your victories,

Accept your defeats with grace.

Know you have friends -

And when you fall flat, pick yourself up and get back into life.

I love you, love me.