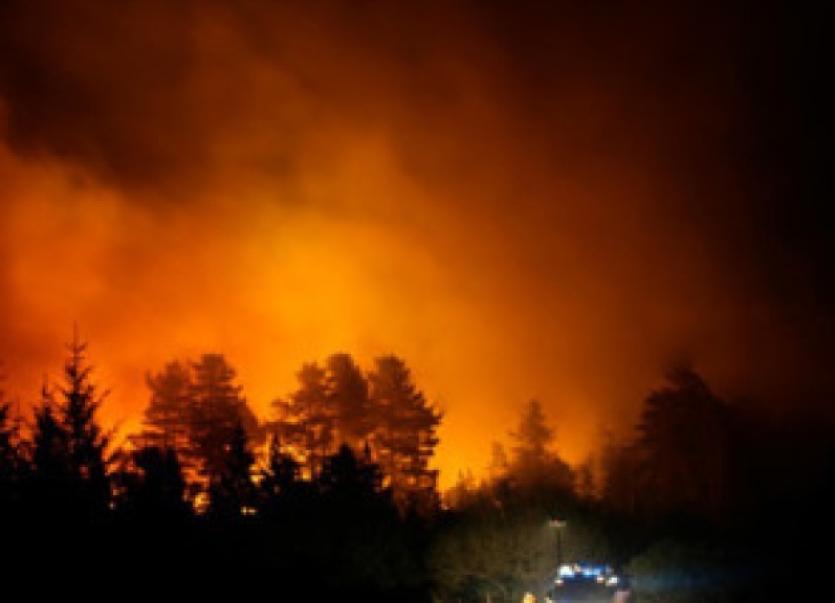 Scenes reminiscent of previous years were evident once again last weekend as gorse fires struck in a number of areas in the county.

Scenes reminiscent of previous years were evident once again last weekend as gorse fires struck in a number of areas in the county.

The dry spell over the Easter holiday period which continued into this weekend has left much of the landscape very dry and vulnerable to the outbreak of such fires,

The fires occurred in a number of areas including the Frosses and Mountcharles areas and also in a large forested area off the main Glenties - Ardara road. Other incidents were reported fro around the county including locations in Dungloe, Gweedore and Falcarragh.

Eye witnesses at the scenes of both the Mountcharles and Glenties described these fires as some of the worst they had seen in the last few years.

“These fires seem to take hold much quicker than we have previously witnessed and looked much worse than last year. The fire brigades were on the scene very quickly and managed to get in under control after a few hours.”

The Mountcharles/ Frosses outbreak took place at approx. 9.00 pm and was attended by brigades from both Donegal Town and Glenties.  The large fire was visible for many miles but the blaze was eventually contained at around 1.00 am.

The Glenties fire crew had just arrived back at their station on the outskirts of the town when they were alerted to yet another fire just off the main Glenties - Ardara Road in a forested area at approx. 1.45 am on Saturday morning.

The crew eventually had the fire under control by 6.00 am on Saturday morning.

The area around Ardara and Glenties was particularly badly hit with gorse fires over the last number of years with voluntary organisations and local residents working closely to diffuse the situation.

Speaking to this newspaper yesterday afternoon Joe Brennan of Donegal Mountain Rescue said, “The hills are exceptionally dry at the moment and extreme caution should be exercised by everybody.

“These fires over the weekend were particularly vicious but the brigades managed to get them under control efficiently.

“However, we all remember the great damage caused to the landscape and the wild life in recent years and only for the great work of the community it could have been much worse.” In West Donegal fire crews battled bogland fires which were being fanned by the winds in the Gweedore and Falcarragh areas. A local person said the smoke was causing problems for drivers saying that with the wind picking up the situation can change rapidly.A spokesperson for the fire service has appealed to the public to be extra vigilant in the current dry spell.