“I’m not done yet” - defiant Pat the Cope Gallagher 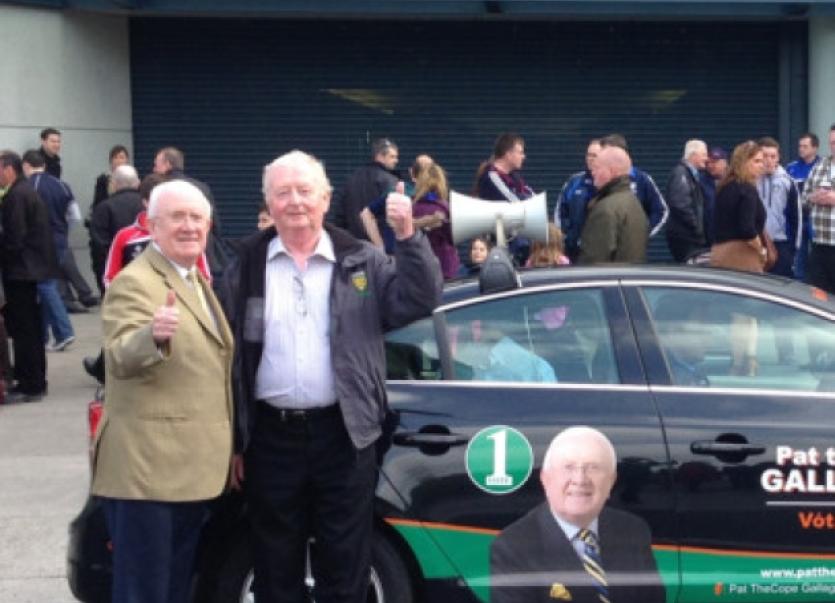 Reacting to the recent poll which placed him at 9% in the European election race, MEP Pat ‘the Cope’ Gallagher said “I’m far from done yet”.

Reacting to the recent poll which placed him at 9% in the European election race, MEP Pat ‘the Cope’ Gallagher said “I’m far from done yet”.

Speaking exclusively to this newspaper as he was entering Croke Park yesterday afternoon Gallagher said, “Of course I was shocked at their findings but I will have to say that it is very early days yet and this can only serve an ‘early morning call’.”

He said: “I have my reservations about this poll - it seems to have been done with quite a low sample but it also shows two members of the Government party also on a very low figure while an Independent is showing quite strongly.

“One way or another it just means that I am going to be out there fighting all the harder and I know that the people of Donegal want a strong, tried and trusted voice for rural Ireland in Europe.”

Given the fact that there was a strong presence of his running mate’s posters in the North West we asked the MEP if there was a rift in the Fianna Fáil camp but he said, “There is no rift but just like any other election you can be assured that I will be out there fighting my own corner.

“I initially requested a joint poster which would have been in every county in the constituency but this was unfortunately rejected by the ‘other side’ and eventually ruled out by the National Director of Elections . This was despite the fact that it has cost tens of thousands to have these individual posters in all counties.

“I want to make it clear I am out there not just representing Donegal but all of rural Ireland which has been ravaged by cutbacks and closures. We need a voice at the European table as funding from Europe continues to be distributed - I am now even more determined to be that voice for rural Ireland.”

The poll places Sinn Féin’s Matt Carthy in the lead on 17%, Fianna Fáil’s Meath based canadidate Thomas Byrne on 16% with Luke Ming Flanagan and Marian Harkin (both independents) on 12%; Jim Higgins and Mairead McGuinness (both FG) are on 11% with Pat ‘the Cope’ Gallagher on 9%. The quota is expected to be circa 20%.