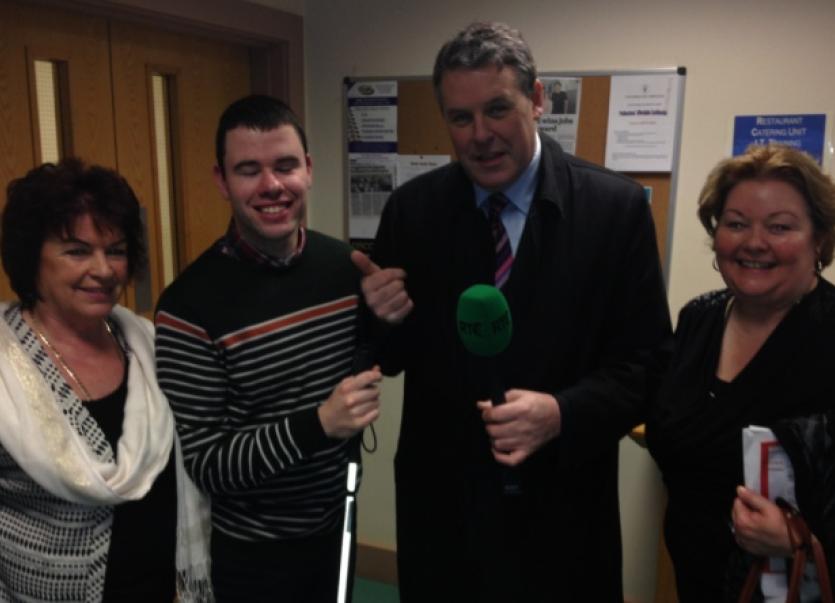 John Doherty and Brian McArt participated in the Disability Activation Project, known as Dact Training Options, at The Congress Resource Centre in Letterkenny

After successfully completing the course John, who is blind, and Brian were invited to take part in a national launch of the course in Longford which was attended by Minister for Social Protection Joan Bruton. The event was covered by RTÉ news and John was interviewed by RTÉ reporter Mullooly. The Letterkenny course was a pilot project and the two Letterkenny men were invited to address the gathering of more than 150 to give their feedback on the course.

John, who did his two-week work placement with the Donegal Democrat, said the staff in the centre had been brilliant during his time on the course which he did last Autumn.

“John said he wasn’t nervous as he didn’t see the 150 people. “I was grand as I had a few days to prepare. I wasn’t nervous about talking to RTÉ because they just asked me there and then.”

Brian said the event was an even was a chance to give feedback on the course. “I am from a different angle than John. It was an age thing when I left (work). I had limited qualifications and no CV done up. Also my health was deteriorating. I had to retrain and rethink and the course was very handy. It started me off in computers and I have gone on to do three courses since out of it.

“I found it was brilliant, it got me out of the house. You know that feeling that you have of despondency, you are sitting there that at my age thinking, ‘there is noting left for me’. And at Congress Centre they were just brilliant at building your confidence.”

Centre coordinator at the Congress resource Centre, Marie Slevin, said the course has been a great success. “It is life-changing for some people who have been in the house for years to get out and get mixing with people.”